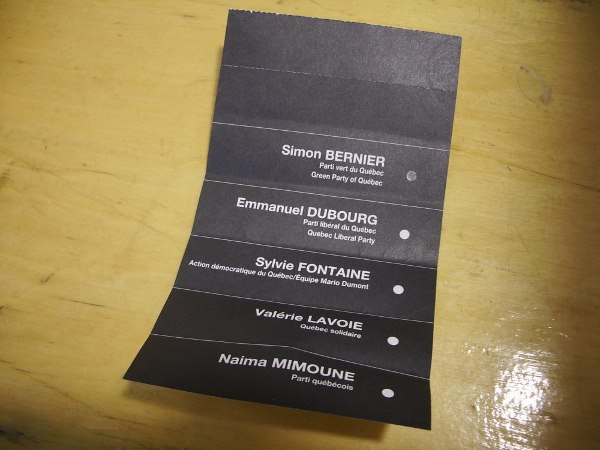 That, in a nutshell, is the dilemma facing a lot of voters this week as the polls go up and down like the swells of a stormy sea. Should I go with the party/candidate that comes closest to sharing my values and beliefs? Or do I vote for a stronger party/candidate in hopes of preventing the election of someone I really don’t like?

The latter option is called strategic, or tactical, voting and Quebecers are often viewed as being the masters of the craft. We sent Bloquistes to Ottawa while electing Liberals to Quebec, then sent an Orange Wave of 59 New Democrat MPs to replace the Bloc, then elected the Parti Québécois locally to offset the loss of our Ottawa indépendentistes.

As comedian Yvon Deschamps famously said, “the true Quebecer knows what he wants. And what he wants is an independent Quebec in a strong Canada.”

If you want evidence that we’re better at it than the ROC, just look at what happened in the last federal election. While Quebecers moved en masse away from the Bloc and the Liberals to the NDP in an attempt to push the Harper Tories out of office, a more modest jump from Liberals to NDP actually allowed Harper to add 22 seats in Ontario.

That election also illustrated a fundamental weakness with strategic voting: it can produce unintended results. With a modest 2 per cent increase in popular vote, the Tories managed a 16 per cent increase in seats. Studies also show that, overall, tactical voting tends to produce two-party states because it siphons support away from smaller parties.

But back to Quebec and tomorrow’s election. If you live in the west end riding of Darcy-McGee, where the Liberals took 84.72 per cent of the vote in 2012, there’s not really any point in voting strategically. In a Parliamentary system like ours, where it’s the number of seats and not the number of votes that determines who gets to govern, taking your Green Party vote and handing it to the Liberals is akin to pouring bottles of wine into a carafe that’s already full. Voting PQ is like pouring it down the drain. So feel free to vote with
your heart.

Moving over to Verdun, where outgoing Liberal MNA Henri-François Gautrin saw his support slip precipitously in 2012, the margin of victory over the PQ candidate was just 547 votes. In 2014, both the Liberals and the PQ are running star candidates, neither of whom has ever run for office. The PQ’s Lorraine Pintal is well known among francophone Quebecers after more than 22 years at the Théâtre du Nouveau Monde.

Facing off against her is Jacques Daoust, a long-time Verdun resident who until recently ran the Investissements Québec economic development agency.

Both parties are fighting tooth-and-nail to take the riding and it could easily come down to a few hundred votes. It’s safe to say that anyone in Verdun who has the least interest in politics knows that, in this race at least, every vote probably does count. That likely spells bad news for the Coalition Avenir Québec, Québec Solidaire and Parti Vert candidates, who in 2012 earned nearly 29 per cent of the vote. This year, even strong supporters of the lesser parties are probably giving serious consideration to holding their noses and voting for either Pintal or Daoust in an attempt to keep their most-hated party out of office. The narrower the perceived gap is between the front-runners, the more likely it is that third-party supporters will vote tactically.

At a riding level, however, the “perceived gap” can often be dead wrong. The statistical probability of polls shrinks considerably when you look at subsets of the survey. The latest Léger survey, for example, polled 3,692 people across Quebec but only 374 in the Montreal region. We don’t know how many Verduners Léger asked, but with 28 ridings on the Island, it’s probably only about a dozen. So, if you randomly stopped a dozen people on Wellington Street to ask who they were voting for, the reliability of your poll will be similar to Léger’s. But at least you may have included people who don’t own computers, because like most surveys these days, the Léger poll was conducted online.

Tactical voting is a fact of life in our winner-take-all electoral system, which provides little incentive to stick with your heart in close elections. That’s one of many reasons why there is widespread support for creating a system of partial proportional representation, which would help reduce some of the distortions produced by our current system. PPR has been in the PQ platform since René Lévesque was premier, but the distortions tend to favour the party that takes power, which may explain why the PQ has never acted on it.

A fairer system would seek a better correlation between the number of votes a party attracts overall and the number of seats it gets in the National Assembly. That way, electors in Darcy-McGee would no longer be pouring their votes into overflowing vases or down bathroom drains and Québec Solidaire voters in Verdun would know that although their vote might not elect a riding MNA, it could still help their party get greater representation in Quebec City.

And push whoever is elected to put in place a system of PPR that better respects and reflects the will of the Quebec electorate. ■

Peter Wheeland is a Montreal journalist and political columnist for Cult MTL. Read his sardonic observations about the city and province in Quebec Ink every Wednesday.