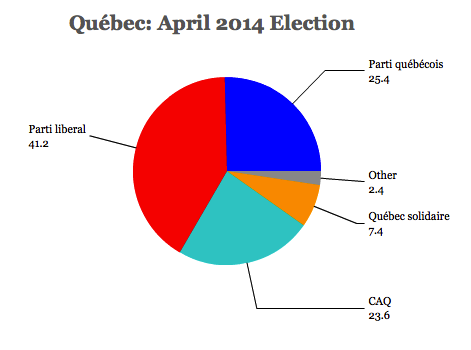 The popular vote, via suffrario.org

The only people who can truly take credit for the humiliation the Parti Québécois suffered Monday night are the ones who came up with the party’s game plan while in government and its improvisation on the campaign trail.

They are the architects of their own collapse. That’s what you get when you try to build on a foundation of arrogance, misinformation and manipulation. Happily, that behaviour not only failed to produce the majority they were so confident they’d win, the party’s popular support eroded like rebar in the Turcot Interchange, going from 32 per cent of the electorate in 2012 to just 25 per cent today.

There’s no need to keep flogging that dead horse, however. Now it’s time to look forward, not back.  (And there’s no one more pleased than I am that this will probably be the last sentence I ever write about the stillborn Charter of Values.)

Quebec sovereignty is not dead. If that’s the message you took away from Monday’s vote, you are deluding yourself, just as Macleans magazine did when it ran a cover story on April 24, 1995, asking “Is separatism dead?” Five months later, the corpse came within a whisker of winning the sovereignty referendum.

As Liberal premier-elect Philippe Couillard noted Tuesday, “an idea never dies.” The PQ will regroup and attempt to rebuild its fractured base and Québec Solidaire will continue to advocate for an inclusive projet de société as a precursor to a sovereignty referendum. Will their combined efforts manage to eventually push support for independence past its usual 40 per cent threshold? They well could, with a little unintentional help from Ottawa and its new friends in Quebec City.

Premier Pauline Marois’s mantra during the campaign was no referendum “as long as Quebecers aren’t ready.”

Ready to vote “yes,” that is. As long as that possibility exists, the sovereignty movement will continue to be a force in Quebec  politics.

Another lesson to be drawn from Monday’s vote is that we need to respond to Québec Solidaire’s call for a system of partial proportional representation to even out the massive bumps in our democratic landscape.

PPR was a hot topic in the wake of this vote, with Radio-Canada and The Gazette, among others, illustrating how various models of PR or “compensatory mixed-member representation” could have affected seat distribution with Monday’s popular vote.

(Note that if a PPR had been in place prior to Monday’s vote, a lot of people would have voted differently.)

Support for the idea came from every corner of Radio-Canada’s three-party panel of former MNAs on Tuesday, who noted that such systems were up and running in several European countries. One of the direct effects of those reforms, said former PQ MNA Jean-Pierre Charbonneau, was a greater likelihood of coalition governments, which in turn led to more consensus-based governing. “It obliges everybody to put a little water in their wine and collaborate with others,” he said on Le club des ex.

Former PQ premier René Lévesque said that one of his great regrets was not pushing through PPR when he had a golden opportunity to do so in 1984. The PQ caucus voted the proposal down, however. It came up again in 2003 under the Charest Liberals, but after an incredible amount of work went into developing a proposal and a massive consultation that attracted 379 groups and individuals to participate in public hearings, the idea was watered down by 2006 and eventually tabled to death by successive Charest governments.

Incredibly, before the PQ was elected in 2012, future Democratic Institutions Minister Bernard Drainville said a PQ government would also look into the idea but, to respect the democratic process, significant reforms could only come after launching yet another consultation process, achieving consensus from all parties, and then holding a referendum on the issue.

(It turns out he would be too busy anyway, planning a major change in government employment policies that would violate the province’s own bill of rights based on … absolutely no studies and no consensus. I wish I could remember what he called that idea.)

Couillard told reporters on Monday that he wants to change the perception Quebecers have of their political class by fostering a parliament that “rediscovers the meaning of respect, listening and trust.”

Dusting off the 2006 consultations and building a new consensus on them would go a long way to doing just that. ■

Peter Wheeland is a Montreal journalist and stand-up comic. His sardonic observations about the city and province appear on Cult MTL every Wednesday. You can contact him by Email or follow him on Twitter.