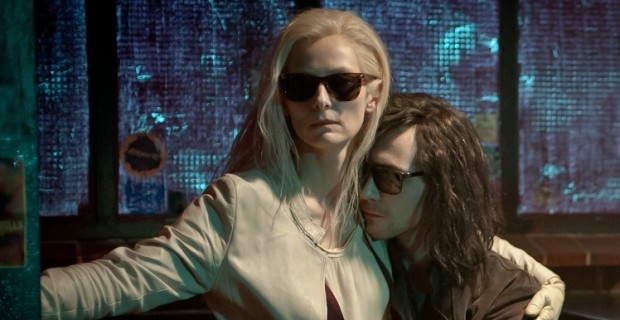 The characters in Jim Jarmusch films are certainly not unfamiliar with the feeling of inertia. From the shiftless hipsters of his breakout Stranger Than Paradise to Johnny Depp’s wandering, dying William Blake in Dead Man, Jarmusch has long mined the alienation of boredom and the inevitable passage of time for his films. There are few protagonists in cinematic history who feel inertia as much as Adam and Eve, the vampiric protagonists of Jarmusch’s latest, Only Lovers Left Alive. While it may share genre elements with hogswallop like the Twilight films, there’s no need to be alarmed: these vampires sleep and noodle on guitars way more than they twinkle.

Adam (Tom Hiddleston) lives in a shabby Detroit home piled with outdated electronics, records and musical instruments, pounding out Velvets-esque fuzz dirges all night with only the occasional visit from a lackadaisical go-fer (Anton Yelchin). Eve (Tilda Swinton) lives in Tangiers, reading books and spending time with the elderly, immortal Christopher Marlowe (John Hurt). What unites them is their love: Adam and Eve have been married since 1863. As vampires, they do not age or die as long as they keep themselves constantly fed (which Adam achieves through an increasingly uncomfortable no-questions-asked relationship with a doctor played by Jeffrey Wright) but lack of blood leaves them weak and frail.

Living for so long has its consequences, however, and Adam is growing increasingly frustrated with the way humans have been squandering their considerable assets throughout his lifetime.  He asks Eve to come join him in Detroit, but when she finally arrives, it’s not long before her party-girl sister Ava (Mia Waskikowska) arrives to complicate things.

Jarmusch’s last film, The Limits of Control, was probably his most indulgent one yet, a hypnotic anti-thriller composed entirely of cryptic conversations and droning post-rock soundscapes. Only Lovers Left Alive is indulgent and personal in a whole other manner — there’s at least five minutes devoted to Yelchin and Hiddleston fussing over a series of vintage guitars, and the supposedly groundbreaking songs that Adam obsessively composes are the work of Jarmusch and his collaborator Jozef van Wissem. What one wouldn’t let slide in a lesser filmmaker feels jubilatory in the hands of Jarmusch, an intensely personal journey that combines Jarmusch’s feelings about life and art with not-so-sly asides about how great Jack White is.

It’s thanks in part to the leads that Only Lovers Left Alive transcends the “brooding vampire romance” tag. Hiddleston and Swintown embody the vampires not as broodingly inhuman, but rather as ageless and exhausted, containing all of the wisdom in the world but prisoners of the antiquated technologies they grew to love (when Eve packs to go to Detroit, she fills her suitcases entirely with books) and are never quite on the same wavelength as everyone else. Their performances are effortless, unmannered and do a lot to separate the film from the vampiric Antonioni film it might read as.

Jarmusch’s best movies tend to be near-plotless, ambient tone poems (although that description probably fits his worst movie, too) and that’s really what makes Only Lovers Left Alive a fantastic film. It’s got such a specific, intoxicating vibe to it that it sticks with you way after the credits roll. It’s only because Jarmusch has made so many great films that Only Lovers Left Alive isn’t amongst the very best. ■