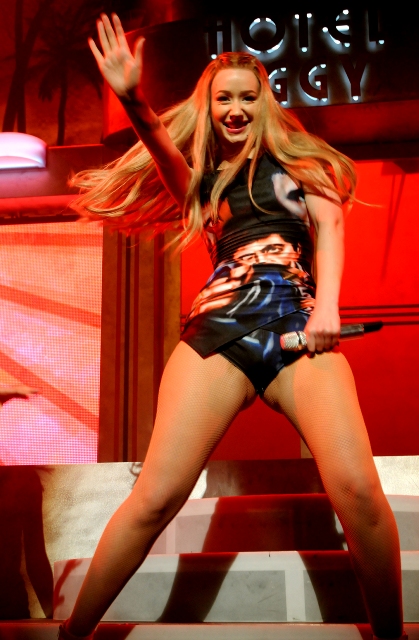 Iggy Azalea. Photos by Cindy Lopez (scroll down for more)

Blink and you might have missed Aussie rappeuse Iggy Azalea’s punctual, opener-less (unless you count her DJ), hour-long set at Corona last night, which was done before 10:30 p.m.

So outside of the early finish, was Azalea’s long-awaited show (she had cancelled a number of previous visits) worth the fuss? Much like the 23-year-old’s also much-delayed debut album, The New Classic, as a performer she remains a work-in-progress. If anything, her biggest hit (and set closer) “Work” exposes her best qualities and worst faults.

Think about the song for a minute. What are the most memorable parts? The parts where she works — or twerks, if you will — immediately spring to mind. The bridge about valley girls being, ahem, head over heels? Hilarious double entendre. How about her attempts to borrow a page out of the Twista book of fast, meaningless stutter rapping? Not so much.

As you might have guessed, the multi-faceted twerking was revealed as an appreciable art form. Her best hooks were also delivered well, and the fashion conscious crowd ate them up and sang them back to her. Her mutated inflection — part-Valley Girl? Part-patois? — was a delight. Her attempts to rap quickly or prove technical proficiency over pop wittiness did not go over as well.

The beats, the same as on the album/mixtape/Steve Aoki single, were a little all over the place too. They worked mostly when DJ Wizz Kidd, to the right of the stage next to Azalea, her short-shorted dancers (with their names emblazoned on the back of said shorts) and in front of the Hotel Iggy backdrop, stuck to party-friendly brostep. The crowd twerked in kind.

The Hotel Iggy set-up was pretty elaborate for a Corona-sized production, but there wasn’t the sort of overarching theme you might get from a big Bell Centre pop-stravaganza. There was also only one costume change — one would think that number will rise as Azalea upgrades to larger venues in time.

The real surprising thing about Azalea’s live show is just how unsurprising she is. While the idea of an Australian model-turned-rapper is strange enough a career trajectory, Azalea lacks the bombast and flair of her pop peers. She’s a decent rapper, one that will presumably improve (although her new album is a step down from her mixtape), but there’s nothing shocking or cage rattling about the whole endeavour.

And maybe there doesn’t need to be. Maybe this was just a rap show after all. ■

55,937 cases of COVID-19 have been reported across the province according to Santé Quebéc.