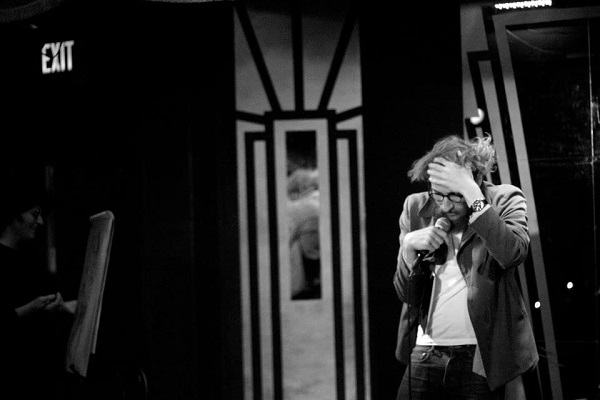 Nomadic comedian David Heti has performed all over the United States and Canada, and entertained audiences in London. Now he’s released his first live, full-length comedy album/DVD: It was ok.

The album was filmed and recorded in Montreal, at Grumpy’s, where Heti began his stand-up career while studying law at McGill. “It was a friend of mine from New York who filmed the whole thing,” says Heti. “He’s a cinematographer, and he’s been a big supporter for years and he said, ‘I can make a video.’ Had it not been, for many people, but for him, it really wouldn’t have seemed realizable. It wouldn’t have happened.”

Heti’s approach to comedy is refreshing — don’t expect the usual delivery from a confident and loud persona. He’s soft-spoken, a bearded and specky fellow more akin to a well-dressed Woody Allen with an at-times nervous and reflective joke delivery. His comedy can also be kind of offensive… if you don’t get the joke.

I had a chat with Heti a couple weeks ago about his album, and life as a stand-up comedian.

Kayla Marie Hillier: What made you decide to do the DVD?
David Heti: New York was this really intensive time. I was there for about five, six months and things were feeling good but at the same time there wasn’t much distribution of stand-up. I don’t know what other comics receive when they get on stage, but I know that some people really like what I do. And people have said for a long time, you just need to find the audience. And so this is a way of putting it out there for people to see and it’s also a lot of jokes that I’m tired of telling. It’s sort of this weird thing where certain jokes, I think they’re done. They’re from an earlier era so they’re not as interesting to me. Those are in there because they’re good but the more recent jokes, which I think are more complex but not as polished, are also in there.

KMH: So how does one establish themselves in this business?
DH: I just stuck with it. I was in law school when I really started to do comedy and I didn’t enjoy law school. Stand-up was where I was finding my reason to get up every morning. It depends how you start off. In Montreal, everyone has their eyes set on Just for Laughs. And if you’re in Toronto, everyone thinks that Yuk Yuk’s is the way to go. Everyone has different paths for different types of comedy. But for me, it was more the independent comics’ rooms. They’re a little more receptive and encouraging of the type of comedy that I do — not so mainstream. Whereas the clubs are like, no thanks.

KMH: Your comedy is really different from a lot of the comedians I’ve seen perform. For lack of better words, it’s almost like it’s geared to a more educated audience. Is that fair to say?
DH: I don’t know that much of my comedy requires that you’re too well-read — there’s one Nietzsche death of God reference. I think you have to be intelligent, which I think is different. I don’t understand the references that most comics make. I don’t watch the TV shows etc. But that to me is more, not esoteric, but you have to be more knowledgeable in a sense, than for mine.

KMH: Does it bother you that people can take offence to some of your jokes?
DH: You can’t do what you do for everyone — otherwise it’s crap, I think. And certainly there are certain rooms that go better than others and certain ones that I’ve been told I can’t go back to.

KMH: Is there a topic you wouldn’t touch?
DH: I think anything is game if you do it well, if you do it artfully and intelligently and y’know… funny.

KMH: Why didn’t you pursue law after completing your degree?
DH: It didn’t work out professionally because the federal government whom I worked for didn’t like the fact that I did stand-up — and they knew at the time. It was in my cover letter, and in my interview they asked me for a joke, we discussed comedy. Basically what happened is that someone I worked for must have googled my name and seen something online and complained to HR. They said that we can’t have people in the public thinking you’re some misogynist when you’re in court. But I was like, “Yeah, this is performance. It’s totally a joke.” So I got a letter from Ottawa saying that I had to agree to no longer use a certain kind of material on stage or I could lose my job at any time.

KMH: What’s next for you, now that you’ve completed your album?
DH: I’m going to be in Montreal for a couple months teaching a comedy writing course at McGill actually. That should be super fun. And right now a tour is being planned to Atlantic Canada for two and a half weeks right after the Fringe. I would like to go back to New York I think, that’s where comedy, for me, is most interesting but it’s nice to be able to tour and if you can sustain a living like that, I think it’s the best way for a year. But it does wreak havoc on your body and your mind.

I’m really grateful in a sense to the independent comedy scene in Canada. I feel the establishment is a business more or less. It’s nice that people are taking initiative for themselves and for others. ■

You can purchase It was okay, an album of comedy, here for $10.

Heti will also be celebrating the release at Grumpy’s (1242 Bishop) tomorrow, Tuesday, April 29, with an evening of stand-up and music provided by Chris Durning. 8:15 p.m., free

And if you’d like to try your hand at comedy writing, check out the 6 week course that he’ll be teaching at McGill University, Comedy Writing: Are You Joking?