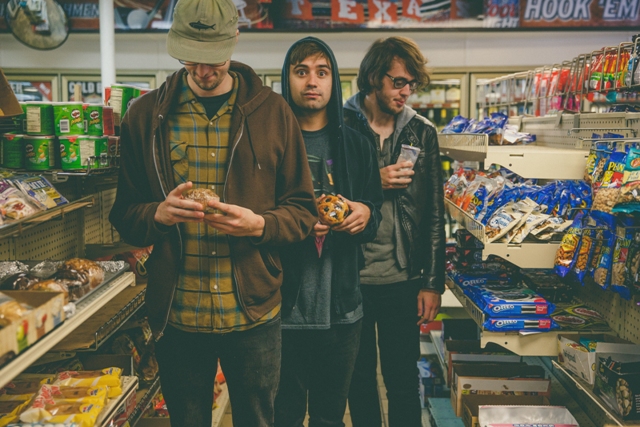 When it comes to their music, Cloud Nothings have a tendency to veer off the script. So it’s understandable that although their latest album, Here and Nowhere Else, is technically supposed to be the sprightly Cleveland balls-to-the-wall rock trio’s haggard post-fame record, it sounds anything but.

The group’s mastermind, 22-year-old singer and guitarist Dylan Baldi, says that although they were subjected to the disorienting grind of relentless touring following the success of their previous album, Attack on Memory, he came away from the experience a new man.

“The album is about being comfortable with yourself,” Baldi says from Los Angeles. He’s currently living in Paris — his girlfriend is French—but he has yet to pick up the language, in case you were wondering. “We were being sent around the world, and I had to learn how to handle myself in these situations. It’s something everyone goes through — having to figure out how to live and get by.”

With the nuances of living figured out, Baldi and his bandmates, bassist TJ Duke and drummer Jayson Gerycz, were able to get down to constructing the precise album they wanted to make. Here and Nowhere Else is a quick first listen, a simple rock album that careens at hurtling speeds. Every subsequent listen, though, reveals another unexpected layer of interplay between bandmates. The album is loaded with little instrumental touches that listeners hardly take the time to appreciate anymore.

“I think the record is made for people like me,” Baldi says with a laugh. “There are things on it you might not notice the first time, because it’s high-energy and there isn’t much of a break. There’s cool stuff going on there that most rock bands, at least right now, don’t really do, so it pays off to listen closely.”

Another un-current-day rocking thing Baldi likes is long songs, in the eight-minute range. On Attack on Memory, he introduced his new band with the epic second track “Wasted Days,” a screeching call-to-arms that demonstrated how the former basement solo project had evolved. With “Pattern Walks,” the penultimate cut on Here and Nowhere Else, the group’s intense ebb and sobering flow pattern of rocking is taken to extremes.

“‘Pattern Walks’ ends on an upbeat note, after it fights through this messy, noisy part. It’s a beautiful release,” Baldi explains. “Even within the songs, I like to keep a balance. I like extreme music, but I also like extremely relaxed music, and I don’t want to make either of those. I want to take elements from everything I listen to and combine them into my own songs.” ■