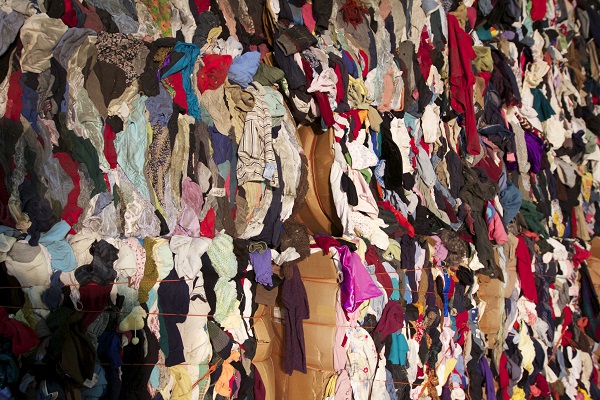 When you put on your favourite T-shirt, you probably don’t think much about it. Many of us have that 100 per cent cotton shirt, purchased at a concert or thrift store — gifted/stolen off a friend — that’ll likely never leave our wardrobe.

In 100% T-Shirt, local director (and member of Bell Orchestre) Kaveh Nabatian traces the history of this clothing staple from cotton fields to picket lines, from artists’ drawing tables to the street.

We spoke to Nabatian and producer Ina Fichman about their new documentary, its Montreal focus and the powerful, yet simple, garment.

Kayla Marie Hillier: How did the idea for the documentary come about? Why the fascination with T-shirts?
Kaveh Nabatian: I was actually approached by Intuitive Pictures to make the doc. At first, I was a little hesitant since I’m not much of a fashion guy. Then I realized that I wear T-shirts most of the time and yet I had never given any thought to how they’re made or where they come from or where they end up. Once I started to get into it, I became fascinated by the culture around T-shirts: the ethics of manufacturing and production, the history from marines to tie-dyes to punk rock to hip hop to American Apparel. Their use as a political tool, the shadiness of the big T-Shirt industry, the association with sexuality and street culture — and besides, as a touring musician with Bell Orchestre and Little Scream, selling T-shirts on tour has sometimes been the way I eked out a living.
Ina Fichman: I have made films about pop culture items before, like coffee, and thought the T-shirt would be a great way to tell the story of our contemporary culture. It’s fashion, politics and social statements all rolled into one. And people have such an intense connection with their T-shirts — their favourites, ones they have had for years. That’s why we hope that our web platform will take this story even further. Everyone will be able to share their “T-shirt story,” upload pics, videos and anecdotes. When we launched in Austin at SXSW, we were amazed at the collection of T-shirt stories we were able to capture on video.

KMH: Did you know before you started filming how large of a role Montreal would play in the discussion of the history of T-shirts and their current production?
KN: I’m a Montrealer, so I wanted to focus on my city. I also wanted to look at the local industry because Montreal has historically been an important player in the textile industry and there are some amazing people here who are innovating and fighting to bring the industry back.
IF: While we knew about Dov Charney, of course, it was only when we started to do research that we saw the impact here. For one, we do have the history of a strong shmata industry and it was great to see that Josephine of Delyla is really trying to continue this tradition. And, of course, Montréalité‘s T-shirts are iconic.

KMH: Was there anything that surprised you during production — anything you hadn’t anticipated?
KN: I was especially blown away by the industrial beauty of the factories — these incredibly loud, massive, precise machines that take giant bales of raw cotton and turn them into tiny threads and then weave them together. Some of the factories are as big as city blocks.
Also, for me, it was the first time that I had been so involved in every aspect of a documentary. I was the writer, director, cinematographer, interviewer and composer — along with the Barr Brothers’ Andrés Vial. It was really fun to wear so many different hats while working on a single subject.

KMH: Had you always set out to explore the political use of T-shirts or was that something that came up organically during filming? How did you choose which political issues to focus on?
KN: People use T-shirts to define themselves — whether it’s a cultural movement, a band, a slogan, a joke or proof that they’ve travelled to the Hard Rock Café in Las Vegas. But how people define themselves politically via their clothing is particularly interesting to me. We looked at groups that use T-shirts for other political purposes: environmental policy, political parties, HIV awareness etc. But I chose to work with Revel & Riot for a few reasons. First of all, their shirts are graphically engaging. Often, people who print slogans or messages on T-shirts don’t have much design ability, but Emy really knows what she’s doing. Also, Emy showed us letters from some young people who had started wearing Revel & Riot T-shirts as a first step of their coming out process. That’s a really powerful and direct political effect from a T-shirt! And beyond that, Emy and her crew are extremely fun and engaging people to hang out with.

IF: Revel & Riot are extraordinary and they have an impact worldwide. Since the ‘60s, the T-shirt has truly functioned as a political/social billboard and continues to have this role. It’s an accessible and extremely effective way to get a message across — whether you are a global NGO or a local cause. One of the aspects of our web platform is an initiative called T-shirt for a cause, where we will choose four causes, launch design contests and then most of the proceeds from the sales of the chosen T-shirts will go back to the cause.

KMH: Was there anything that you wanted/wished you had included in the documentary that you couldn’t due to budget, time constraints etc.?
KN: I would have loved to go to one of the massive sweatshops in Asia. I think it would be important for people to see the actual conditions that most T-shirts are made in. It would make people think twice. Unfortunately, we didn’t have budget, and getting access to those sweatshops is extremely difficult, for obvious reasons. ■

The first 25 people to show up at screenings will get a free T-shirt. Also T-shirts from Revel & Riot, Delyla, III MKYS, Peace & Cotton and Montréalité will be drawn at the end of each screening.