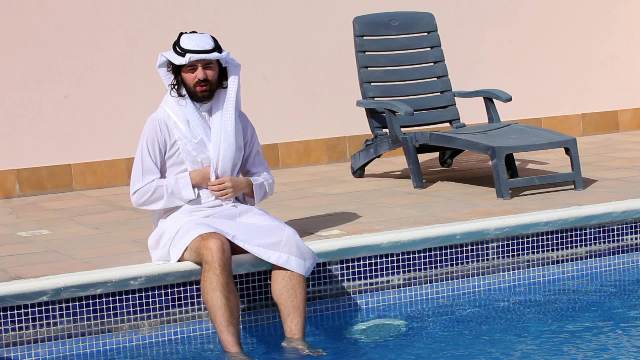 I mean no disrespect to one of Quebec’s pioneer feminists, but I suspect that that Janette Bertrand has long ago left the building. The renowned Quebec author is the symbolic figurehead of les Janettes, a coalition of women formed to defend the Charter of Values after the full-time feminists in the Fédération des Femmes had the temerity to suggest that the section of the Charter that bans religious iconography does more to harm women than it does to liberate them.

Anyway, the 89-year-old Bertrand has become the poster granny for Charter supporters and, despite some earlier gaffes, was trotted out by Premier Pauline Marois this weekend in a bid to rebuild fading support for the Parti Québécois in the last week of the election campaign.

It’s a decision Marois is being blasted for after Bertrand recounted an illuminating story during a “secular brunch” in Laval on Sunday.

Addressing the partisan crowd, Bertrand told the peculiar tale of going for a swim in her building’s pool with a female friend when two men enter the area and turn around to leave after seeing the women in the water. (The context makes it clear that she’s talking about two Muslim men.) “Imagine that they leave, that they go to see the owner, who is happy to see lots of rich McGill students there. And then they ask: hey, we want to have one day (to have the pool to themselves). And there, in a few months, they’re the ones who have the pool all the time. That’s the erosion (of women’s rights) that we fear, and that is what will happen if there is no Charter.”

Okay. Notice the use of the word “imagine.” She’s making this story up as a way to explain why it’s important to adopt the Charter. In it, she manages to create the ultimate super villains — rich Muslim McGill students — who slowly introduce Sharia Law in her Villeray apartment building’s swimming pool.

Even Richard Martineau, the Journal de Montréal polemicist who promotes the Charter and denounces its opponents from his TV and print bully pulpits, was shocked. Not speechless, of course. He has never been speechless. Anyway, Martineau quickly issues a sequence of Tweets that go something like this (my translation):

“Madame Jeanette Bertrand, please, DON’T TALK ABOUT THE CHARTER ANYMORE!!! You’re hurting the cause more than you’re helping it.”

“With ‘friends’ of the Charter like Janette Bertrand, the PQ and pro-Charter (advocates) don’t need enemies.”

“As if the application of the Charter will solve anything at all in the pools of private buildings. … Come on!”

“Janette hasn’t uttered enough nonsense about the Charter? The PQ had to give her back the mic so she could add a second coat?”

Forget the fact that Bertrand has evidently lost any talent she once had for telling believable stories. She may not be the best spokesperson for the Charter, but she’s an excellent example of the muddy thinking of a good number of its supporters. As Martineau noted,  the proposed secular legislation will do nothing to change bathing rules in private pools.

But he could also have added that — to the disappointment of many Chartistes — it won’t halt the immigration of Muslims, Sikhs and Jews, it won’t prevent women from wearing headscarves or even niqabs in the street, it won’t stop devout workers from taking five-minute prayer breaks two or three times a day.

Above all — it will do nothing to stop the rampant ignorance and paranoia that has fuelled this entire debate.

Bertrand was right about one thing, however. Her story was intended to show that the most effective way to take away rights is a bit at a time. A few free swims today, a whole day next month, next thing you know they’ve taken the whole pool. That’s the Muslim menace that seems to scare so many Quebecers like Bertrand.

Too bad the fundamentalist Muslim community in Quebec would have trouble filling a pool, let alone stealing one.

The bigger threat to Quebecers is this strategy of étapisme (the term coined for the one-step-at-a-time plan for separation in René Lévesque’s PQ) that underlies the Charter. The clearest example is the five-year exemption that Marois plans to offer institutions like the Jewish General Hospital (which it says it will refuse). When pressed on whether the government will actually fire doctors, nurses, technicians, orderlies or janitors who wear kippas, hijabs, turbans or hip hop crucifix bling, the premier points to the exemption and says workers will generously be given time to adjust.

“Yes, don’t worry Fatima, we won’t make you go bare-headed today, you’ve got five more years to chose between your faith and your job.” One assumes Marois is hoping Aisha, Baljinder and Chaim will quit long before the exemption expires, saving her the embarrassment of doing what she has insisted won’t happen: firing people for respecting their religious beliefs.

Personally, I’m glad Janette Bertrand is speaking out. She perfectly personifies the hate and fear and ignorance of Islam that the PQ has tried to exploit for electoral purposes with the Charter. She’s the honest face of prejudice that forms the impenetrable bulwark of the bill’s support.

But unlike Martineau, I’m not convinced Marois didn’t know what she was doing when she put the Raving Granny back in front of the mic.

Bertrand might embarrass the intellectual crowd with her musings about Allah in the aqua-fit class, but she reminds the hundreds of thousands of Quebecers who think just like she does that the only way to beat back the heathen hordes is to give the PQ a majority.

I wonder which side God is on.

I guess we’ll find out next Monday. ■

Peter Wheeland is a Montreal journalist and stand-up comic. His sardonic observations about the city and province appear on Cult MTL every Wednesday (and more frequently during election season). Email him or follow him on Twitter.