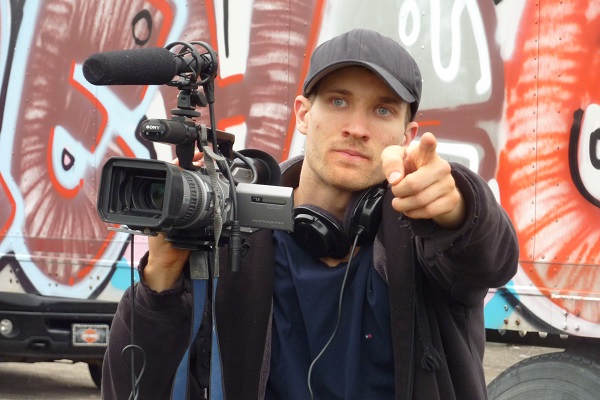 Since 1995, local director Patrick O’Connor has been documenting graffiti in Montreal, across North America and through Europe.

At first, he captured the artwork in photographs, but once he acquired a video camera in 2004, he began the lengthy 10-year process of filming his first feature-length documentary, Making a Name, which used Montreal as a microcosm of global graffiti subculture. The film premiered last year at the International Festival of Films on Art (FIFA), and lucky for us, we don’t have to wait another decade to see more of O’Connor’s work.

This year at FIFA, O’Connor is premiering Freights, a documentary that took him across Canada from Victoria to Halifax, interviewing and documenting prolific freight writers. We spoke to O’Connor recently about the film and his future projects.

Kayla Marie Hillier: So tell us a bit about Freights.
Patrick O’Connor: It’s an in-depth look into the graffiti subculture where people specialize in painting freight trains. I started documenting graffiti on freight trains in 1997, both in B.C. and in Quebec. I found it interesting that there are subcultures within a subculture — in this instance, where certain graffiti writers specialize in painting freight trains, or in other cases passenger trains. The trains travel all across North America so they communicate with other freight writers, as they’re called in different provinces or different states. This particular film is focused on Canada. I went across the country a couple times, interviewing the most prolific freight writers. I’m probably going to do a feature length version which’ll include the rest of North America — Freights is just 40-something minutes. But it’s a very in-depth look into that world.

KMH: How did you first get involved in graffiti culture, and with freight writers in particular?
PO: The first freight train graffiti I remember seeing was in 1996, a freight car by FLOW — who was Montreal’s most prolific writer at the time — facing the highway near Dorval airport. That same year, I explored a small freight yard by my house, in what is now the super-hospital construction site behind the Vendome metro station — they used to lay-up freight trains along with commuters there back then — which again had a FLOW piece on one of the cars there, along with other local NDG writers at the time, whose names were on the other freight cars in that yard.

My personal involvement in doing graffiti was between 1999 and 2003, in which time I only painted about 20 freights, in various yards and lay-ups around the city. I was arrested once during that time, painting on the streets.

KMH: Did you have any trouble with police while working on this film?
PO: I got stopped by police a few times but it was nothing. They just asked why I was filming. I don’t know what they were suspecting me of, I just said I was a rail fan and they were okay with that.

KMH: What’s your next project? Are you planning to revisit graffiti culture?
PO: I’ve planned only one other graffiti-related film. As much as I love it and it’s fun doing it, it’s kind of going to be a relief once I get to move on to other subjects that have been in my head over the past 10 years.

The last graffiti-related one will be specific to the continent of Europe, where people specialize in painting passenger trains. That’s a big trend there compared to North America, where freight trains are the bigger thing. They do paint some freight trains in Europe and vice versa, but it’s kind of the flip — bigger thing to do passenger trains there. It’s really interesting in a way, it’s kind of a James Bond mission to try and paint the train: yard security, sometimes sensors, alarms, police and guards, and all that kind of stuff. Then trying to take a photo of the train the next day when it’s done. That’s like a whole other subculture unto itself. ■