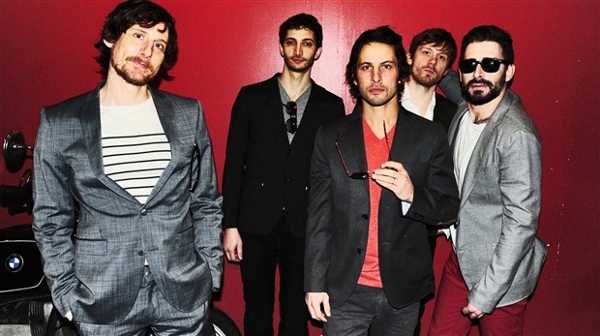 When an artist starts telling me about the cool dude he brought in to produce his record, that’s when I usually tune out. Like recording in a cabin, it’s a factoid that bands find more interesting than listeners do.

In the case of West Island native Sam Roberts — hitmaking CanCon rocker who doesn’t get nearly the credit for throwing a lot of African musical acumen into his CHOM-approved jams that he deserves — the famous weirdo who produced his band’s latest record, Lo-Fantasy, is actually worth discussing: Martin Glover.

Better known as Youth, Glover is a member of Killing Joke, one half of the Fireman (with Paul McCartney) and produced a personal ’90s fave: the Verve’s Urban Hymns.

Youth’s tactics were somewhat extreme: He stuffed the quintet into Mixart Studios in NDG, kept them sleep deprived and forced them to churn out the album in 12 days.

I recently caught up with Roberts to talk about the crazy magic of Youth.

Erik Leijon: How did Youth get involved, anyway?

Sam Roberts: I sent him the demos. I had never met him before. I figured he had an eclectic enough background to get what I was into. I only half-expected to get a reply, but sure enough I heard back and he came to Montreal. It was January and cold, so he said we had brought him to “Hell on Earth.” He started taking these ideas and turning them around, saying the bridge should be the chorus or vice-versa. I had an instant distrust of the man. We grew to become friends, but at first my attitude was more “who the hell are you to pick apart my songs?”

EL: How did you know if he was being a crazy genius or just crazy?

SR: You just don’t know, do you? If he’s actually crazy, then you realize it’s a crazy person making your record. As it turns out, he’s a crazy genius, which is exactly the kind of person you want in your life. He was the powder keg to our otherwise stable environment.

EL: It was a quick recording, right? Twelve days in NDG?

SR: In NDG! Youth brought his assistant, who’s basically the only person who can translate what Youth is getting at into something tangible. He sat in editing, looking at Youth, and Youth had these subtle and not-so-subtle indicators that he was into what we were doing.

EL: And those indicators were?

SR: He moved, and if he got up and did the full rain dance, then we knew we had something seriously good on our hands. Then he’d just say things like “laaaaame” or listen to a guitar solo and go “that’s cabaret.” What the fuck does that mean, anyway? We were always on edge because we didn’t know if he was coming back happy or blunt and brutal. It was 12 days of being an egoless, mindless music machine, which is the way it’s supposed to be.

EL: Have you ever seen the movie 24-Hour Party People, with Martin Hannett shouting orders at Joy Division?

SR: That’s exactly what we wanted! When I first saw that movie I knew I wanted to make a record with a guy like that. I wanted the guy to have a gun, and for him to be potentially violent, and I wanted him to tell us to fuck off as much as possible. We got our guy.

SR: No no, he’s all good vibes. He’s a full-on pacifist. Everyone else in Killing Joke wears black all the time, and he wears bright turquoise Hawaiian shirts and sun visors.

EL: Lo-Fantasy also seems to have more hooks on it than your other albums.

SR: That’s Youth. “Don’t bore us, get to the chorus.” We have a natural reluctance to make a song catchy. We think a song should only have one or two brief moments of unadulterated hooks. But he was more about hitting ’em between the eyes, so the album is a bit of a battle between our musical personalities.

EL: And “Golden Hour,” is that your Verve-type song?

SR: That’s another thing bands can be hush-hush about. We’d do something that sounded a little bit like the Verve, and Youth would tell us “why not just go all the way with it?” ■