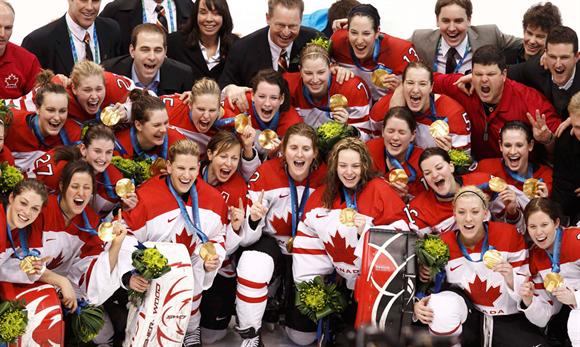 The women’s hockey team in Sochi

Canada post: Montrealers were glued to their television sets yesterday, watching the Canadian women’s Olympic hockey team miraculously come from behind to beat their American rivals in the gold medal game. It was the stuff of legend: The Americans had them against the ropes, but ringed an empty-netter off the post. The Canadians stormed up the ice, tied it up, then won in overtime. Let’s see how the men do in today’s semi-finals, also against the U.S.

Budget: Quebec finance minister Nicolas Marceau unveiled his government’s 2014 budget Thursday, but don’t get too caught up in the details: it’s just another step towards a spring election. It’s unlikely the national assembly will even put it to a vote.

An expensive fixie: The city of Montreal has agreed to buy bike-rental service Bixi’s local assets for $11.9-million, pretty much ensuring the bikes will be back next summer. Bixi still owes the city $38-million, so the $11.9-million price tag will actually be coming out of what the city’s already owed. Put it on Bixi’s tab!

Fire in the disco: There was a fire at Gay Village hotspot Pure Nightclub last night. It started at 1:20 a.m. on the second floor, before going to the Pizza Pizza on street level. Everyone was able to get out safely, and the arson squad is now investigating.

House of Qards: And speaking of sucking and dicks, rumour has it that St-Jérôme’s next PQ candidate will be one of our least favourite people.  ■