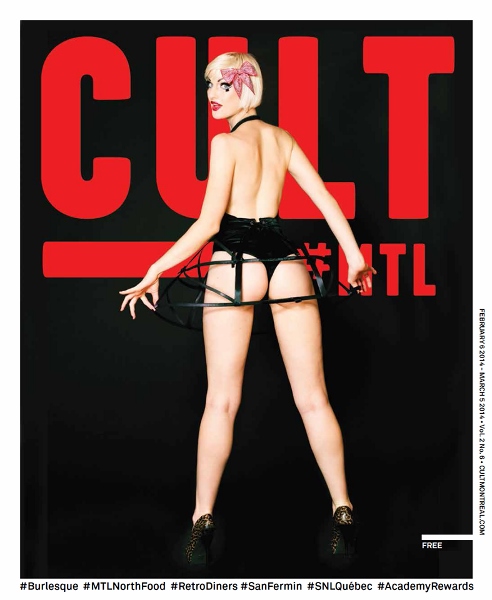 Lady Josephine on the cover of Cult MTL Feb. 2014. Photo by Andrea Hausmann

In the 1940s and ’50s, where the Théâtre du Nouveau Monde now sits on Ste-Catherine Street near St-Laurent, a venue called the Gayety used to attract hordes of fans and followers of a performer who was once the most famous woman in the city: Lili St. Cyr.
Though she was born and died in the USA, St. Cyr was the cornerstone of Montreal’s burlesque empire, a scene that first bloomed during the days of Prohibition in the States and wilted when the morality squad arrested St. Cyr and shut down the venues where she and her fellow performers strutted their stuff.

“Burlesque is a very creative art form, and a lot of work and a lot of choreography goes into the costumes and performance,” says Jeremy Hechtman, proprietor of the Wiggle Room, Montreal’s fledgling burlesque club. “[In the ’60s, ’70s and ’80s], the mob bribed the cops to look the other way, and they managed to get the laws loosened up, but it wasn’t to bring back tassles and fan dances. It was the simplest, easiest, cheapest, sleaziest, most exploitative stuff that ended up filling the vacuum.”

Now Montreal has its own Burlesque Festival, a burlesque venue and a vast range of shows. There are those who channel the vintage aesthetic and style and those who’ve modernized the art with contemporary costumes, music and physical feats, not to mention the rising male burlesque movement (“boylesque”) embodied by the likes of Billy l’Amour.

On the other end of the spectrum is Thea d’Ora, the new jazz-age alter-ego of one of the local scene’s most prominent figures, Lady Josephine. Josephine, this month’s Cult MTL cover star, has been working Montreal stages for five years and will continue to perform regularly. The strictly retro, extravagantly costumed and dance-based persona Thea d’Ora is a means of diversification.

“They have two different audiences,” Josephine explains. “Lady Josephine appeals to a younger public looking for something edgy, funny, provocative and theatrical. But I want to share this art form with an older crowd that’s new to burlesque, and present a beautiful, gentle, elegant and sensual introduction.”

Lady Josephine, who’s now a burlesque teacher herself, is one of many local performers to have been taught and mentored by Mlle Oui Oui Encore, whose troupe Blue Light Burlesque has been going strong for a decade. Her fascination with burlesque began in the early aughts, when she saw a Vancouver troupe at Café Campus (where Blue Light now performs six times a year).

“I found it so cool,” says Oui Oui, who remembers hollering like a hound dog at that first show. “It mixes a lot of things that I really like: the love of retro, of vintage, vintage lingerie, powerful women and positivity — you leave this show with a big smile.”

Burlesque Festival founder Scarlett James, a performer since 2008, first witnessed burlesque in the mid-aughts and was shocked to discover that the local scene was still so small.

The festival, which showcases a range of performers both local and international, had its fifth edition last December. But not everyone
agrees with its raison d’être. Responding to a harsh recent critique of burlesque life written by longtime NYC performer Dr. Lucky, Miss
Sugarpuss — one of Montreal’s original burlesque revivalists, alongside Oui Oui — stated online that the article’s primary points (that burlesque performers are undervalued and underpaid) — are part of the reason why she’s taking a break from performing. (Miss Sugarpuss = Holly Gauthier-Frankel, a professional actress who’s also currently working on a Centaur Theatre
production.)

“There are basic ideals and principles by which to create and perform your burlesque, and I think what I tried to bring aesthetically and philosophically had more optimism,” she says. “The Montreal Burlesque Festival is a wonderful thing that happened, ultimately, because people started to understand what burlesque was, but it was done too soon, in the spirit of making money.”

Part of the problem, according to Gauthier-Frankel, is that while the scene is still small, the standards have been raised in areas where they needn’t be. Echoing Dr. Lucky’s editorial, she explained that far too much money is being funnelled into costumes. And much like issues in indie and punk rock milieus — about paying dues, staying DIY and retaining integrity while trying to support oneself —
Gauthier-Frankel has felt conflicted about investing in and living off burlesque.

“I climbed on that bandwagon, and then my money ran out and I almost had to declare bankruptcy. I wanted to produce shows, I wanted the costumes with Swarovski crystals and fake eyelashes. I don’t regret any of it, but the more glittery stuff I had to buy, the more pressure I felt.

“It’s an emotion-based art form,” she adds. “It’s about ‘I’m beautiful, look at me, it’s fabulous and it’s joyful’—at its best, it could be that, but the opposite of that is ‘I gotta get more and more and more.’ It’s greedy, it’s ugly, it’s competitive and it’s bullshit.”

Nevertheless, she’s happy to see the scene grow, and don’t count Miss Sugarpuss out — she continues to teach and will likely return to the stage, but not for big money. Lady Josephine, on the other hand, is clearly making burlesque work for her, aesthetic extravagance included.

“I’m incredibly grateful and incredibly surprised that I can do this as a full-time job. If you had asked me four or even three years ago if that was possible, I would’ve laughed,” Josephine says.

As for Hechtman, his primary goal in this first year of the Wiggle Room (apart from simply staying open) is to help keep the scene afloat, which is why the former Fringe Festival/Mainline Theatre producer opened the venue in the first place.

“Performers from other cities often say, ‘I wish we had this’ wherever they came from. In some ways we’re ahead of the game, and in some ways we’re right where we oughta be. I don’t think anyone wants it to be a passing fad.”

On the subject of burlesque’s raison d’être, money and longevity, the last word goes to Oui Oui:

“We must be doing something right because people keep coming. If the public is pleased, they give you energy, and the thing about burlesque is that it has to be a fun experience and a good time. You’re not going to pay off your house with that—it’s not about
money, it’s about something else and this is really cheesy but I would say it’s about magic. That’s why women like it so much.

“Life is so hard today. My tickets are the same price as they were 10 years ago, the economy is not good, but life is not only about money, it’s about something else, and that’s why we do burlesque.

“The scene here is healthy, and I think it’s here to stay.” ■