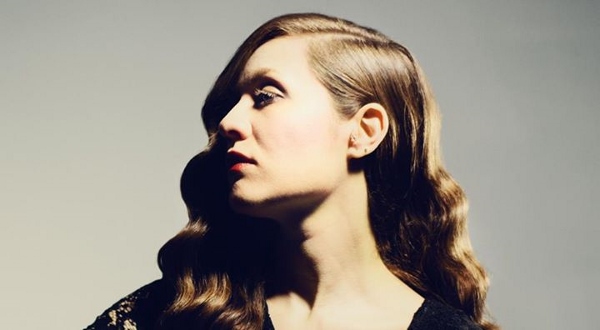 Hamilton’s Jessy Lanza made waves in 2013 following the release of her debut album, Pull My Hair Back. It’s one thing for an artist to arrive fully formed, with an original sound and a creative vision, but it’s even more impressive when that artist finishes up her rookie year by topping numerous best-of lists and year-end polls of both critics and music fans alike.

Lanza’s talent is twofold: as a songwriter, she is capable of writing suave pop hooks that nod slyly to the ’90s-era R&B she grew up on; as a producer, she creates rich-sounding tracks that stand out amongst the current crop of electronic producers.

Her background in music goes back a number of years.

“I played in one kind of jazzy band that played around Hamilton called Flattstreet when I was a teenager. That was my one band experience,” says Lanza over the phone, fresh from a morning interview and performance on CBC Radio’s Q.

This was followed by a multi-year stint in Montreal, where she pursued music studies at both McGill and Concordia. However, she only started getting serious about making her own music once she put grad school on the backburner.

“About five years ago, I moved back to Hamilton,” she explains, “and somebody was nice enough to give me a copy of [music production software] Logic, and I started messing around with that. I had a couple of synths laying around, and I started trying to do my own stuff rather than recruit other people to do drums or guitar. I did everything myself, and it kind of went from there.”

Creative collaborator and fellow Hamiltonian Jeremy Greenspan (of Junior Boys fame) lent some production assistance and had a hand in Lanza getting signed to the esteemed U.K. record label Hyperdub, which boasts a formidable roster of artists such as Burial and Kode9.

“Steve Goodman, who runs Hyperdub, is an old friend of Jeremy Greenspan. When Jer and I started working on stuff, he saw Steve while DJing somewhere, and he asked him what he was working on. Jer played him a bunch of our stuff. He liked it and said that he would release our record once we had enough material, so that was definitely motivation to finish the LP,” says Lanza.

A memorable performance at this past year’s edition of Pop Montreal was followed by a European tour that took her from Berlin to Barcelona, the former being where she played at techno’s infamous temple of hedonism, the Berghain.

“[Berghain] is a pretty crazy place. There’s two clubs. I was playing in the more band-friendly space, and Jeremy was DJing the other one. I don’t think there is any place like it in the world. I went there stone cold sober. It’s intense and there is a heavy vibe. There’s a lot of weird stuff happening. People definitely do a lot of drugs,” says Lanza.

As for the year ahead, Lanza has plans to release an EP in the spring and to continue touring. However, when she’s not on the road she still plans on calling Hamilton home.

“I like living here, and I like my studio set-up. It’s comfortable,” she explains. “I like working there, so I’m going to stay there for now. There’s less distractions. I was living in Montreal, and there’s always lots of people around and lots of stuff to do, so it’s not always conducive to working all the time. Living that lifestyle is good in its own way, but in Hamilton there is not as much to do, so I end up going to my studio a lot more.” ■