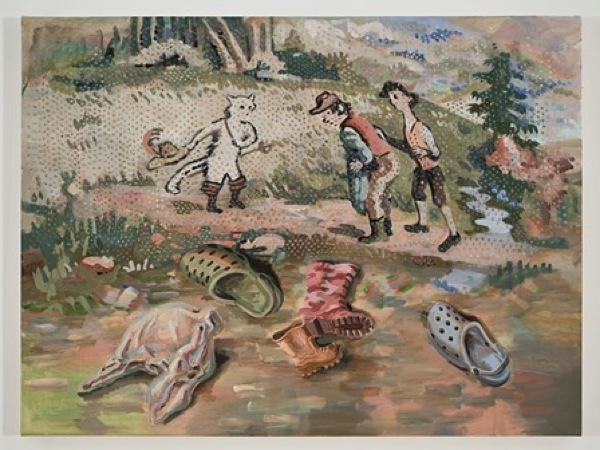 From The Book, by Carol Wainio

In The Book, curator Diana Nemiroff has collected works by Ottawa painter Carol Wainio that reference fairy tales, reflecting on books as objects, the narrative practice of reading to children and the fantastical creatures that populate these stories. The canvases, drawn from the last eight years of Wainio’s work, wrap up a five-stop tour of Canadian galleries with this show at UQAM.

“Images for very young children are incredibly powerful,” says Wainio. “It’s evocative of an earlier period, when images would have been far more scarce and therefore much more powerful.”

She explains that her interest in old fairy tales and folk stories stems from an interest in history, offering a means of evoking or communicating with “a past we can barely imagine anymore” through the stories that were told.

“Originally,” she says, “fairy tales were not children’s stories. The versions we have today are much more sanitized. They were household folk tales, really, and when they were originally written, they were not the kind of things that we think of as being for children today.”

While Wainio’s work channels the historical and fantastical, recent MFA grad Isabelle Guimond looks much closer to home for inspiration, drawing her images from scenes in the Hochelaga-Maisonneuve neighbourhood where she lives and works.

“I start with wandering,” Guimond explains. “I walk in my neighbourhood and just try to be inspired by the everyday and what I can see in my environment. All the pictures I love start in the streets. I tried to have a new look at what I could find in the street — the garbage, the gate rust, an old mattresses — and link that with this idea of freedom and dreaming.”

Thematically, she explains, the pictures try to show that “even when something is really bad or goes really wrong, you can always keep your dream burning.”

Finally, the gallery celebrates the online launch of The Painting Project, a digital extension of last year’s wildly successful exhibition of the same name. The images and essays collected and produced for the exhibition will be shared freely online, giving everyone access to this “snapshot” of the state of contemporary Canadian painting. ■