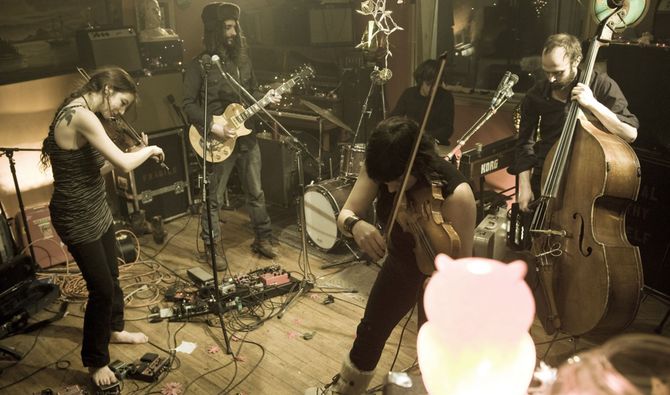 Come Worry With Us!

Making its world premiere at RIDM, Helene Klodawsky’s Come Worry With Us! follows Thee Silver Mt. Zion members Jessica Moss and husband (Godpeed You! Black Emperor founder) Efrim Menuck after the birth of their son Ezra, as they try to balance parenthood, touring and creative endeavours.

I spoke to Klodawsky earlier this week about the film and the importance of discussing creative struggles in alternative culture.

Kayla Marie Hillier: How did the concept for the film come about? How did you get in touch with the members of Thee Silver Mt. Zion?
Helene Klodawsky: When I learned that they were touring with a nanny and child, I was intrigued by the idea of a group of creative, politically engaged musicians trying to combine art-making, parenting and being on the road. A mutual friend introduced me to the band and we began discussing the project which I saw from the outset as a political film.

Throughout many years of being an independent documentary filmmaker, I’ve explored how family and personal lives intersect with political and economic forces. Today, the insecurity that artists have traditionally experienced and chosen has become pervasive. Strongly associated with being outside mainstream culture, I hoped Silver Mt. Zion might articulate some of these “worries” with intensity and imagination. I was drawn to the band’s commitment to touring with a child and embracing the challenge in spite of how hard it can be.

KMH: What were some of the greatest struggles/difficulties that you encountered while filming?
HK: Come Worry With Us! is neither a conventional tour film nor a rock-bio. It’s an independent film about a complicated juncture in the life of a band. So the challenge was to achieve balance by featuring enough of SMZ’s unique music, ideas and politics, while at the same time exploring themes of love, gender and precariousness.

KHM: Why do you think it’s important to discuss these creative struggles?
HK: The interface between life and work in alternative culture is something we don’t often talk about, especially when it comes to women and children. What values are extolled when considering family, sacrifice, merit and commitment? How challenging is it for artists — especially for those working outside the mainstream — to shape personal lives in ways that reflect their visionary work? The fact that Thee Silver Mt. Zion are coming out with a new album and have just announced a month-long European tour — with kid in tow — is great news! ■

You can also join us for the premiere’s after-party, feat. live music by local bands CTZNSHP and Diamond Bones at the RIDM Headquarters (3450 St-Urbain), tonight, Thursday, Nov. 21, 9 p.m., free