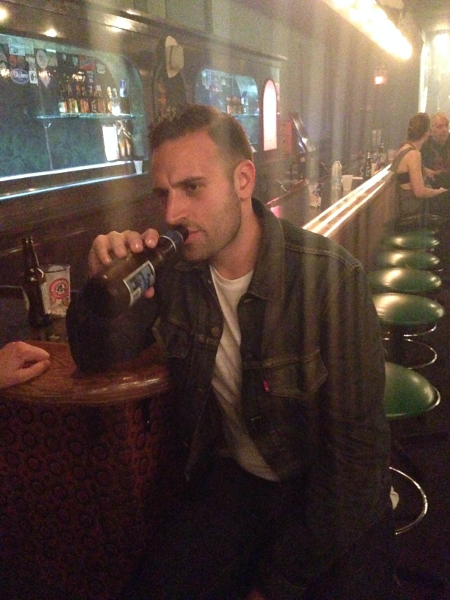 I wish there was a great story of why I’ve never been drunk before. The only reasons I can come up with as to why this has never happened are 1) fear of embarrassment; 2) fear of spending money; and 3) overall lack of interest.

Of course, I have had alcohol in my life — a few sips of Manischewitz wine on Jewish holidays, a half a glass of Guinness at the factory in Dublin, a whole bottle of Smirnoff Ice, which I drank in a Las Vegas hotel room. Then I did three somersaults on the bed. Then I lost 35 bucks on slot machines. I once drank half a bottle of hot beer at a Suuns show because I was so thirsty. But this is really a comprehensive list of alcohol I’ve consumed over the last 30 years.

So why get drunk now? What was the point I was trying to prove anyway? That alcohol gets you fucked up? If I’m going to write about my misadventures in the city I so proudly love and despise, I was going to have to try new things. This seemed like a major thing. This seemed like a great place to start.

I decided to ask the lovely gentlemen of the local band CTZNSHP to join me on my quest. Before the night started, I decided to lay down some simple ground rules for myself and my touring party.

I decided to start my night at a friendly establishment where I could relax and enjoy my first drink. I know the staff at Il Motore (179 Jean Talon W.) well enough to trust their recommendations for my inaugural drink. Veronique, the loveliest and best bartender in town, made me a delicious amaretto sour to start off with. It was fucking great, and reminded me of how every drunk girl smelled in 1998. We did a quick round of tequila and triple sec shots. They tasted like alcohol. Thank God a Polka-jazz fusion-metal band started their set just in time for us to leave.

We walked down to Nouveau Palais (281 Bernard W.), where we tried a fascinating homemade concoction of grape drink and vodka that blew my hair back. Then we did some vodka shots that tasted like, yep, you guessed it — alcohol. It was around this point that I realized I might be a bit buzzed. I didn’t really want to leave Nouveau Palais because it was warm and familiar, and I was really scared of getting drunker. But then we left and shit got real.

You know that super swanky joint on Parc that has all the palm trees and it wouldn’t be that weird if you saw Humphrey Bogart’s ghost smoking a cigar in the back? Well, that’s where we went. The Emerald (5295 Parc) was the classiest place on our journey, so I ordered a Margarita with extra salt because fuck you. It was delicious, and I’m not sure if it was all the beautiful people or all the lovely decor or the fact that I was legit getting drunk, but I felt like I could lift a car over my head. So I did. Just kidding. Who do you think I am?

Without a hint of irony, we headed to Cabaret du Mile End (5240 Parc), as there was a Rush cover band playing, and this was something I had to see with or without alcohol running through my tiny Jewish veins. Sadly, the show was already finished, but we had a quick beer while we watched the Geddy Lee impersonator pack up his keyboards.

By the time we got to Sparrow (5322 St-Laurent), I was feeling pretty dizzy and definitely noticed my speech getting louder and less articulate. I think this was due to all the alcohol I was consuming. Who knows? We had a round of tequila shots that were super delicious. I tried an Old Fashioned, Don Draper’s drink of choice on Mad Men. He’s such a complex character, eh? That beverage put me way over the edge, and by the time we left, I was stumbling around the street, apparently very worried about getting a ticket for public intoxication. I did not. Thank God. My mother would have been so upset.

When we got to Casa Del Popolo (4873 St-Laurent), the lovely bartenders recommended Irish Car Bombs to kick things into overdrive. This is some fucking drink right here. The offensive name aside, anything that involved dropping a shot into a pint of Guinness and then chugging the whole thing seemed completely insane and hurt my brain. By this point, I didn’t even know what I was babbling on about. I had, quite tragically, become the very kind of people I make fun of. I ended my night with a glass of whiskey because if you’re gonna die of alcohol poisoning, you might as well do it with style.

We made our way to Fairmount Bagel (74 Fairmount W.), where apparently I dropped a shitload of cream cheese on my new jeans. I don’t remember eating four bagels, but I guess I did, and I guess I’m a pig. I made it home in one piece and amazingly walked my dog in a straight line without him even realizing something was off about me. He’s very perceptive.

I woke up the next morning and I felt like I had been shot out of a cannon. Everything my parents warned me about drinking was right on. But sitting on my bathroom floor covered in my own barf really gave me some time to reflect on my life. Maybe getting drunk is a rite of passage better enjoyed by 14-year-olds, but I certainly don’t mind that I waited three decades to try it. I’m fucking wayyy cooler than a bunch of shitty 14-year-olds. ■