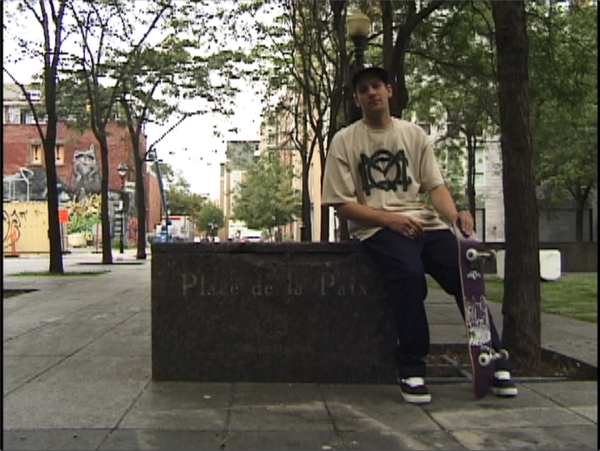 Few people know Peace Park as well as David Bouthillier. Like many skateboarders, Bouthillier was drawn to its marble ledges. But while the lower Main plaza (formally known as Place de la Paix) is ideal for skating, it’s also a hub for drug users, prostitutes and the homeless, all of whom have also staked a claim to the park. Thirteen years ago, Bouthillier, armed with a video camera, began shooting the spot and its locals, who have learned to share the space with each other. What emerged was Peace Park, a feature-length documentary that chronicles all aspects of life in the park. And while it screened at the Festival du Nouveau Cinéma in 2011, tonight, Bouthillier is premiering an updated cut of the film at the square that inspired it.

Lucas Wisenthal: What’s been happening with the documentary in the two years since it premiered at FNC?
David Bouthillier: The movie played as a work in progress at the 40th anniversary of the Festival du Nouveau Cinéma. Since then, we basically shortened it. So there’s now two versions of the movie — there’s an extended version, and there’s a short version. The extended version is still shorter than what played in the FNC. We also changed the music in some parts because it kind of creates more intensity, so it doesn’t feel like the movie’s winding down when it shouldn’t. We also changed the ending a little bit. And a lot of it was subtitle corrections and reanimating images.

LW: Having made this movie over 13 years, you have what I imagine are thousands of hours of footage. How did you carve that into a narrative?
DB: I knew where I wanted to go. I wanted a section on each of the neighbours. I kind of think I got lucky a little bit, at the

LW: So you had a narrative in mind already.
DB: I had a vision of what I wanted to accomplish. I got as much information as I could. And then I was faced with having to build the movie and the narration for the movie. The project was huge — it was a little bit overwhelming. I had to look for help. I found Jessica McIntyre; she helped me write my story. She has a BA in history, so she’s very familiar with writing history as a story. So she helped me bring my story into a cohesive storyline.

LW: In making the documentary, did anything you learned about the park really surprise you?
DB: I think what really surprised me the most was how everyone really felt that there needs to be more tolerance. I think tolerance is the big word that came up a lot, which surprised me. When I did all the interviews, everyone seemed to agree that Peace Park — it’s a microcosm of the city, but what’s going in the park, people need to be more tolerant towards each other and be more tolerant towards people in the park.

LW: What sort of criticism has the movie received?
DB: The feedback that I got for the movie when it played as a work in progress was that it was too long. It’s inevitable that some people think some of the images that are shown in the movie are a little harsh. But most people, even though they’ll bring that up, will say that it’s necessary and it’s also shown in context. So I walked a fine line, and so far I’m still balancing. I’m pretty happy.

LW: Did you worry that people would say it seemed exploitative of the people in the park?
DB: A lot of people did say that during the making of the movie, but once they did see the movie, they realized I’m not exploiting people. I’m more of a voice for people in the park. ■