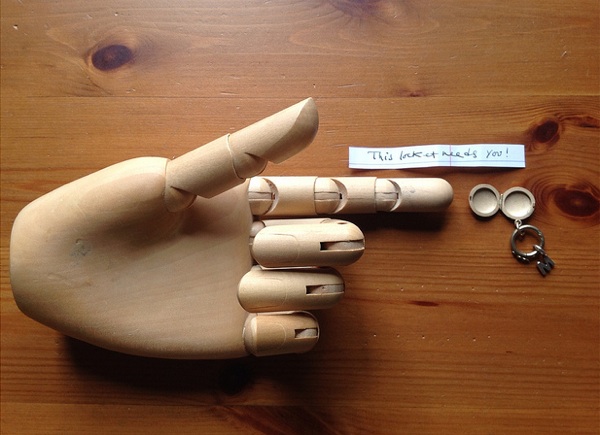 One of Marie-Eve Bouchard’s many tiny lockets

Marie-Eve Bouchard thrives on tininess. At a small table in the most crowded corner of a café, she revises work by her music students. A musician herself, she has an affinity for pared-down instrumentals, short lyrics and the little ukulele.

Her dream is to take a cozy Westfalia driving tour. She’s even abbreviated her name to Meb. And around her neck, at the end of a dark string of mala beads, a shiny metal locket sits like a pea-sized pot of gold. This summer, with that locket, Bouchard is going to show Montreal that tiny can be mighty.

It’s a lesson Bouchard learned on a family trip to Russia in 2006, when feelings of homesickness and culture shock left her searching for reassurance. Inspired by popular Russian objets d’art like Fabergé-style eggs and matryoshka nesting dolls, she began writing inspirational messages to herself and wearing them in her locket. It’s a ritual that has provided a quiet sense of support throughout the years. Now, Bouchard is inviting the public to participate in this private practice through the Feed My Locket project.

Posters around town invite Montrealers to write or draw on a small slip of paper, then mail it in. Bouchard will wear each submission in her locket for a day, then share them in an online gallery. She’s gearing up for round two of the project, but submissions from the first round, which ended in early June, have already had a profound effect on Bouchard.

“I got some really good ones,” Bouchard says as she appreciates and passes each strip along in turn. “Here’s one from my dad: ‘Happy is he who believes.’ It can be religious, or you can give it your own meaning. Here’s one from a student who recently felt that people don’t understand her work. It says ‘Thank you for seeing who we really are.’” 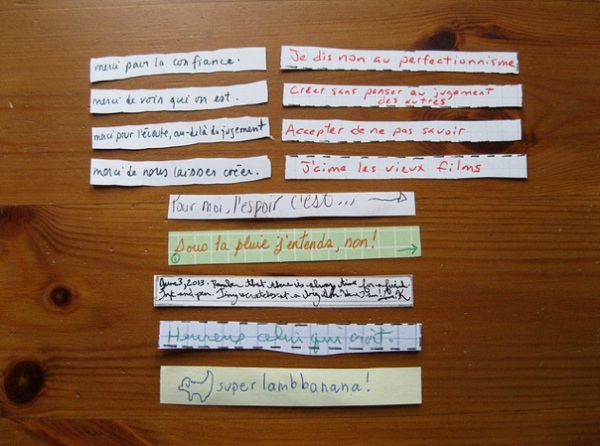 A selection of messages worn in the locket so far

“You know, it was a tough year for me. We had so much to do as teachers to catch up from the student strike delays that I felt really overworked — isolated,” Bouchard says. “But this lifted me out of that a little. It really did me a lot of good.”
Call them talismans of hope or fortune cookies from the heart, and you wouldn’t be far off. Bouchard is fascinated by the locket’s long history of keeping secrets safe, of holding the keys to an inner, sentimental world.

“It’s a really ancient concept. The Romans would carry around talismans in a little leather pouch, for protection, and the Victorians would snip hair off their departed loved ones and carry them around in Mourning Lockets,” Bouchard says. “Saint medallions are the same thing. They all have their own symbolism, meaning and story.”

Whether they preserve the memories of the past, or protect against potential future harm, lockets have the ability to tie the events of mundane, everyday life to ongoing ancestral, mythological or historical narratives. They’re also a miniature temple for imagination and inventiveness, something Bouchard has explored in the past with several miniature-oriented projects forming part of her Little Things Project. There was, for instance, that one snowy season spent in the company of the Winter Goddess.

“This is what I made… I call her the Winter Goddess,” Bouchard says, as she carefully rolls an ivory-coloured ball half the size of a grain of rice onto the table. It is completely smooth except for two small indentation — eyes. Dwarfed by our coffee cups and hands, the Winter Goddess still seems to occupy a presence at our table. Tiny, but mighty, she’ll get you through the cold.

“I really couldn’t take the snow anymore, and I needed some greenery,” Bouchard says. “I have this really spherical locket that can fit small objects, and so every day I would fold up a pine needle and place it in there with the Winter Goddess. It helped me get through the winter.”

Bouchard’s projects aren’t just small, they’re short-lived, too, and that’s part of the fun. She’s a firm believer in the power of small actions, and the ripple effect of dedicating a few minutes each day to creativity.

“The Feed My Locket project is about letting go of the expectations and pressures we place on ourselves, just having fun in a short-term project with five minutes a day to spare,” Bouchard says. “People place standards on themselves with this little piece of paper, like they have to make something amazing. But it’s not about that. It should be fun. It can be simple. It’s about putting a small creative act in every day. And it can really count.” ■