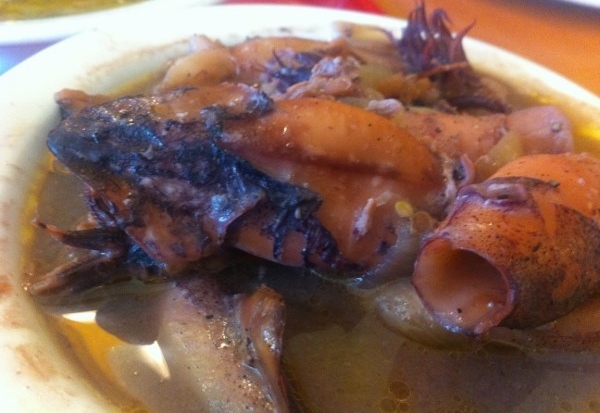 Filipino cuisine has never gotten its due. It’s somehow managed to linger outside the foodie consciousness, avoiding the ludicrously long lines that befall izakayas and the breathlessness that accompanies Chowhound debates on things like Shanghai-style soup dumplings. But that’s bound to change. Our city’s meager non-Vietnamese Southeast Asian food offerings have recently gotten a boost from the openings of Ruby Burma, Satay Brothers and Petite Mangue. And if the goings-on in New York are any indication (and they usually are), much-hyped Filipino restaurants like Maharlika and Jeepney are ushering in a new awareness of the mysteriously neglected cuisine.

Filipino food is what happens when you mix the salty, sweet and sour flavours of Southeast Asia with the colonial influences of the Chinese and Spanish. The result is hard to dislike, unless you’re a vegetarian or abstain from pork. In which case, good luck and stop reading. But if you are a fan of swine (and, for that matter, seafood), Filipino food is kind of a holy grail.

According to a highly unscientific survey of Filipino-Canadian acquaintances, Filipino restaurants in Montreal are mostly a bust. When asked where they’d go to sample their ancestral cuisine, most unhelpfully muttered something about their grandmother’s or mother’s house. Still, there is a dense sector of Filipino businesses in Côte-des-Neiges, most of which are clustered amid kosher joints near the intersection of Van Horne and Victoria. They are all no-nonsense, casual places (one is even called Nourriture à Bon Prix) and seem to be better for breakfast and lunch than for dinner. Though they may not fully do justice to Pinoy cuisine, the neighbourhood’s grocery stores, bakeries and restaurants provide a solid survey of the basics. I enlisted my Filipina friend Mercedes to guide me through them.

Our first stop was for lunch at the most well-known Filipino eatery in Montreal, Bahay Kubo (4735 Van Horne). Mercedes ordered what she said was a quintessential Filipino meal: adobong pusit, squid in a sauce of its own ink; monggo, a mung bean stew with bitter melon; crispy pata, deep-fried chunks of pork leg; a Westernized version of pancit Malabon (ours had spaghetti), a noodle dish topped with pork, shrimp and egg slices; and rice (Filipino rice uses a longer grain and is a bit mushier than Chinese or Japanese sticky rice). We mixed everything together with spoons and forks, as is Filipino custom, and doused it in a chili-infused vinegar. I marveled at how inexpensive everything was (think massive portions under $10) and at the umami punch that the briny seafood and fatty pork gave each bite, even making the underwhelming-looking spaghetti tasty.

A very friendly catechism teacher and part-time Bahay Kubo cook, Mama Norma, described the restaurant as “the most stable” Filipino joint in town, and tipped us off to the Mexicangrown Ataulfo mangoes at the nearby grocery store Kim Hour (4777 Van Horne), which she promised a skeptical Mercedes were just like the smaller, sweeter Carabao variety in the Philippines.

After stocking up on cheap crates of mangoes and staples like banana ketchup, we headed around the corner to the tiny bakery Fiesta Pilipino (5980 Victoria), where we tried sweet buns with coconut paste and a light silken tofu dessert called taho.

We returned to Côte-des-Neiges on a Sunday morning for a Filipino breakfast. By noon, Bahay Kubo had stopped serving breakfast and Restaurant Papa (5955 Victoria) was out of eggs. We stumbled into Cuisine de Manille (5781 Victoria) for a to-go order of sisig (pig innards) and ogled lechón, a roast suckling pig with the crispiest skin I’ve ever seen, while we plotted our next move. We decided to forego eggs at Papa, and ordered tapa, jerky-like beef; longanisa, pork sausage; fried bangus, a fried whole deboned monkfish; sinangag, fried rice; and tocino, cured pork belly. The tocino, lacquered with a sweet sauce, was bacon-like but better than bacon; I’ve had incessant cravings for it since.

Perhaps the reason the Filipino restaurants in Côte-des-Neiges are so unheralded is because what they serve is essentially home cooking. But for those of us who don’t have a Filipino grandmother to cook for us, it’s the closest we’ll get to the sweet-sour-fatty flavours of kitchens in the Philippines. ■