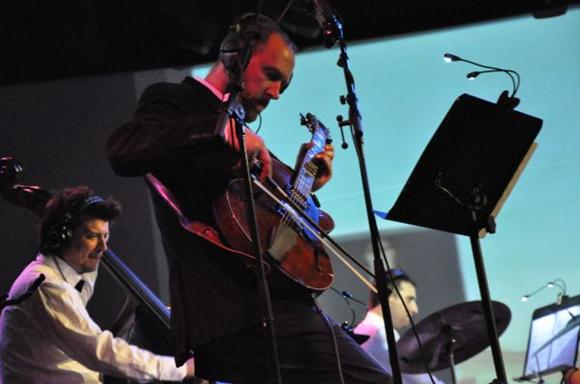 In 2003, an animated, French film by Sylvain Chomet — Les Triplettes de Belleville — charmed the pants off pretty much everyone who saw it. The narrative, about the kidnappers of a Tour de France cyclist being pursued by his grandmother, her dog and three elderly sisters who were a famous vocal group in the jazz era (the titular Belleville triplets), provided enough drama and goofy fun to keep audiences riveted, but it was the music, by Québécois composer Benoît Charest, that tied it all together. The Academy agreed.

Tonight, Charest and le Terrible Orchestre (feat. Jimmy Doxas and chanteuse Betty Bonifassi) will perform a spectacular rendition of the music from the film, on its 10th anniversary. I spoke to him recently, after he’d debuted the show up north in Rouyn-Noranda, about doing the George Lucas thing and transitioning from Belleville’s Django Reinhardt-inspired ditties to dark material like Polytechnique (which he also scored).

Lorraine Carpenter: So have you made any changes to the composition for this tour?

Benoît Charest: Yeah, a little couple of notes here and there that I thought could’ve been better written [laughs]. That’s the good part about revisiting the past — you get to correct it. Of course, contexts make you do hasty choices sometimes, you know what I mean? So with a bit of perspective, you can say, “Oh, had I had a little more time I would’ve noticed that this chord sounds better with this note.” But that’s the creator’s obsessive mind, trying to make things better all the time. We’re having fun, which is the most important thing.

LC: Looking at your two most prominent soundtrack projects, Belleville and Polytechnique, it would seem that you have musical split personalities.

BC:  I’ll go with you on that one [laughs]. I’m a very complex person. And it’s an asset in this world. It started very young. It was actually very intense in my teen years with a couple of friends — we just used to listen to everything we could put our hands on. You know, going to record shops and listening to anything, even records upside down, you know [laughs]. We were just eating it up and listening to all kinds of music and styles and trying to make correlations between them, and I guess I’ve always been drawn by that. So that’s probably how I’d explain the fact that I express myself musically in different styles. Film music for me, in a certain sense, is liberating, since, you know, many bands fail because they don’t find a good name or style or whatever, and some people refrain from writing certain types of music because it doesn’t fit their style. So basically, for me, film music is the perfect alibi to let go of my vile impulses.

LC: I imagine that directors vary in how much freedom they give you in the score/soundtrack department.

BC: Oh yeah, of course. I mean, directors obey to the laws of personality, in term of finding one of every type: you’ve got the control freaks, and then you’ve got people who don’t have a clue [laughs], and then everything in between in all shapes and colours. So basically, freedom is not necessarily something that is an essential thing in film composing. Obviously not, since you have to submit to the film, you have to submit to the story, you have to submit to the style. Certain films, though, by their subjects, give you more freedom, or fit more your personality or whatever, and that’s the case with Triplets [of Belleville], obviously. But for other movies, as I say, I like to tackle different styles of music. Just the idea of learning something new and trying to apply it is the most stimulating thing, I find.

LC: Are you working on any soundtracks now or in the near future?

BC: No film projects at the moment. It’s a little quiet, but you know, nothing happens for nothing. In times like this, I try to do things that I wish I could do when I have too much work. This project required a month of transcribing and doing charts for the whole band, which was, like, 12 hours a day. There was a lot of material to transcribe and put on paper, so that was a job and a half. And now, you know, trying to put this together and everything, and trying to better the show every time we do it, doing little modifications, that gives me the time to do this. If I were in a big production, this would be impossible. So basically, it’s good timing. You gotta be careful with what you hope for sometimes. ■