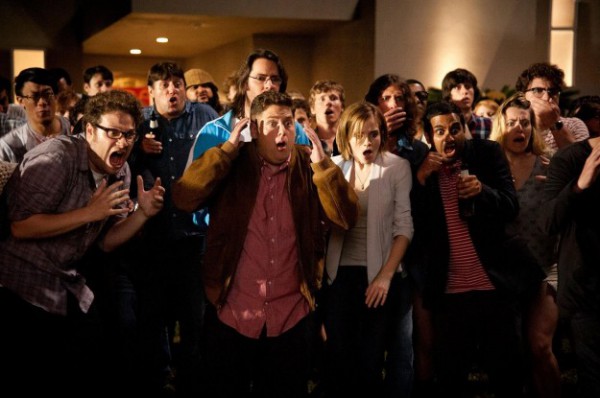 Seth Rogen, Jonah Hill and Emma Watson in This Is the End

It was only a matter of time before Seth Rogen and writing partner Evan Goldberg wrote themselves a comedy blank cheque. The sheer amount of outtakes, unused subplots and renegade improvisations revolving any and all of their movies betray the fact that they seem to want nothing more than to do whatever the hell they want for 90 minutes. This Is The End is the culmination of all that goofing off: an outrageously insane apocalyptic comedy that pushes their already frenzied sense of humor to uncharted territories. It’s the kind of comedic freedom that could easily devolve into an incomprehensible mess, but This Is The End is actually the perfect avenue for Rogen and Goldberg to break off from the more emotionally grounded work they’re known for and move into inspired lunacy.

Jay Baruchel is not much of a fan of the L.A. lifestyle, so when he flies in from Montreal to visit his old pal Seth Rogen for a weekend, he expects to spend some quality bro-time smoking weed and playing video games. Instead, Rogen drags him to a starry party at James Franco’s house, that goes awry when the apocalypse hits, killing most of the celebrities attending the party (and presumably decimating the rest of the world as well). Soon, Rogen, Baruchel, Franco, Jonah Hill, Craig Robinson and Danny McBride find themselves holed up in the bombed-out remains of Franco’s house, rationing food, bickering amongst themselves and attempting to fend off the demons unleashed straight from the bowels of hell.

Each playing a revved-up version of their own screen personae, the six leads work off their considerable chemistry for what amounts to a pretty legitimate disaster movie with a heaping dose of ball jokes and pratfalls thrown in. Think of it as the violent action sequences from Pineapple Express paired with the slacker goofing of Knocked Up. It’s not more, or less, classy than you’d expect from this crew, but they’ve never done anything this crazy. Rogen and Goldberg spare nothing for the sake of a laugh, culminating in a batshit final sequence that puts The 40-Year-Old Virgin’s “Age of Aquarius” ending to shame.

The film’s strengths fall well within expectations and so do its flaws. Rogen and Goldberg are all too eager to fall back on their well-worn comedy crutches like copious ejaculations, frenzied arguments, tiresome gay panic (although, to their credit, Rogen and Goldberg have a near bottomless well of homoerotic situations to cull from) and monsters with huge wangs (an unfortunate holdover from Your Highness) to pad out scenes. Despite moving at a fevered pitch throughout, the middle act sometimes feels like it’s treading water, piling on interchangeable comic setpieces that seem to have made the cut because Rogen and Goldberg couldn’t bear to cut them out. Yet there’s something gleeful about jokes for the sake of jokes — long interludes that are meant to be funny rather than serve an overstuffed script. This is certainly the purest iteration of their sense of humor yet.

Like the vast majority of males in the coveted 18–35 demographic, I love to imagine that these guys are my friends. More than ever before, they’ve made a movie that’s geared to making them laugh along with their friends, and it’s nigh-impossible not to follow them to whatever twisted destination they’ve chosen. Someone gave them 30+ million dollars to light shit on fire and make fart jokes with their best friends, and the movie is powered by the incredulous glee of that realization. ■

This Is the End starts today