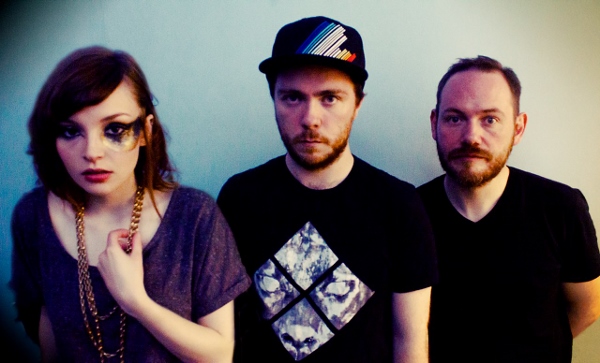 Chvrches are the latest biggest thing out of Scotland. Launched less than two years ago, with only an EP to their name, the Glasgow trio quickly caught the attention of U.K. media and influential music mags and websites with their pretty electro-pop tunes, like this one. (Then this nearly went viral.) Given the synthetic foundation of their sound and the girlish voice of singer Lauren Mayberry (whose degrees in journalism and law must be coming in handy right about now), comparisons to the Knife, Grimes and Purity Ring abounded, but Chvrches are a pop band first.

Having played CMW and SXSW in the spring, the trio is now in the midst of a triumphant headlining tour of North America, and they’ll likely return when their album drops — as announced today, The Bones of What You Believe will be out Sept. 24 on Glassnote Records. I spoke to Iain Cook on Wednesday, as they were preparing for their second Chicago show.

Lorraine Carpenter: So I’m familiar with your old band Aereogramme and the Twilight Sad [Chvrches’ Martin Doherty was a touring member of that band], but not Lauren’s band. Did they ever make it to North America?

Iain Cook: No, I think they only played one or two shows outside of the U.K. They’re called the Blue Sky Archives, I think they’re still kinda goin’ and stuff. We had a chance with Aereogramme to play quite a few times in Canada.

LC: What happened to you guys?

IC: We broke up in ’07. It was actually on tour, the very last tour we did, and it was just going horribly badly. I remember one night I sat down with Martin from Chvrches, just being like, we must do something of our own, hopefully something that people will be interested in listening to. [Aereogramme] was falling apart, we were in a really negative place, and we needed to rethink this whole thing. So it took another five years to coincide our calendars and schedules and sit down and start recording. That was September 2011 when we started thinking about this project.

LC: It sounds like you have the most band experience of the three. Are you putting your wisdom to good use now?

IC: I think so, on a musical level certainly. The main thing that we really wanted to do with this band was foreground melodic material and do our best to write really strong melodies that people could immediately latch on to. But in terms of touring, I guess it’s all about stamina and trying to kinda pace yourself on the road. We’ve been very well-behaved on this tour so far. We’re trying to finish the album while we’re on tour, so there’s a lot of work to be done, and not much time for partying, which is great. No hangovers [laughs].

LC: I noticed your album status updates on Twitter. So it’s in the mastering stage?

IC: Yeah, it’s currently being mastered. As of two days ago, in Chicago, we finished the last two mixes. I think today and Thursday are the last two mastering sessions, so hopefully by the end of the week we’ll actually have an album, which is quite exciting.

LC: Did you work with a producer or do it yourselves?

IC: Because of the nature of the music, and because we’ve got our own studio in Glasgow, there wasn’t really a distinction between writing the music and recording and producing it. Some of the tracks and actual parts that are on the album were written over a year ago, and have stayed there since the beginning. There was never a point where we switched gears and were like, “Okay, now it’s time to produce.”

We kinda did it all ourselves up to a certain point, where we got a guy who works in Burbank, Calif., and that was mainly a time consideration, just because touring was starting to amp up, so we thought we should concentrate on that and get him in to finish the mixing. And it turned out really well. It was a bit terrifying to let someone else work on your music that you crafted from the ground up. But I think it was well worth doing. He brought something unique to the table.

LC: What’s the highlight of this tour so far?

IC: So far, the highlight for me was probably playing the Troubadour in Los Angeles. That venue’s got so much history. So many amazing artists that I’ve kinda grown up with have played there, like Jim Morrison. I think the Doors played their first show there. You see all these pictures on the walls and feel like you’re a part of musical history just by playing there. And the place was completely rammed and sweaty, and it felt pretty authentic. We had a great night. But, really, all the shows have been quite breathtaking on this trip, especially for a band that doesn’t even have an album. We’re just digging the fact that North America seems to be enjoying our music, which is great. ■