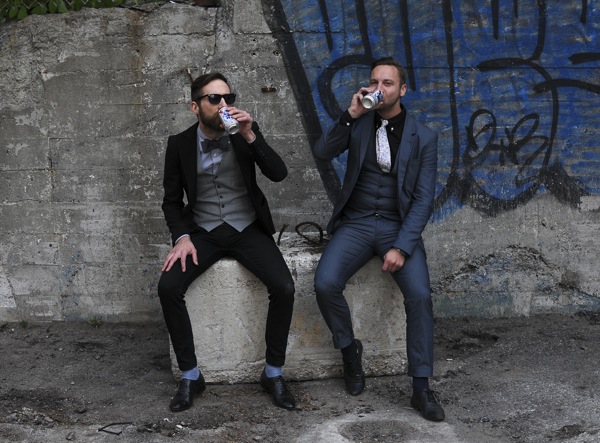 The authors, drinking in an alley pre-show. Photo by Owain Harris

BY MIKE SATURDAY AND JONAH CAMPBELL
PHOTOS BY OWAIN HARRIS

A Saturday like any other, I woke up to the sound of my downstairs neighbour pounding on my bedroom door.

“Drive me to the scrap yard so I can take this metal in and we can get some money!” He had on a pair of short cut-off jean shorts and a T-shirt that said SHAME LASER.

“The front door was just wide open man, wide open,” he said. “Listen, anyway, if we can get to the scrap yard before noon we can get some beer money going.”

At the scrap yard, we get harassed for not separating our different types of copper.

“Keep your aluminum with your aluminum, your hash with your hash, your weed with your weed,” the scrapper tells us. But in the end we get a good payout, over $200 in a rolled up wad of cash. We split it, stuff it in our pockets and head to the new Benelux in Verdun.

A few beers in, and people are asking why Jonah and I are wearing suits.

“We’re going to an exposé on Manon Rhéaume!” I explained. Some time last week I was at a friend’s house barbecuing steaks at 11 p.m., when a wingbat associate of mine pipes up, “Jesus, why didn’t I think of it before, you’d be perfect! The people at Cult MTL have been trying to get someone to go to this event, but there are no takers. All I know is it’s downtown on Saturday and it’s called Manon.”

Even though I’ve only been in town a few weeks, my reputation as a 90s sporting minutiae enthusiast clearly precedes me, and how can I turn down a chance to dig deep into the life of the first female NHL goaltender,* and a fellow Quebecker at that?

At will call we’re engulfed in a hellish muck of old people in evening dress. Most people look over 50, and no one, save ourselves, look like they spent the past six hours drinking beer.

“Strange crowd,” I mutter, slipping my sunglasses back on.

“Ah, here’s your problem, right here,” Jonah says, pointing at the tickets. “It appears we’re in line at the opera. For an opera. Called Manon.”

“Well, we’re here now, we might as well go through with it.”

After two acts, we’re let out into the lobby where I order us a couple of Canadian Clubs on ice. I have no idea where the last hour of my life has gone.

“Apparently, Manon recounts the tale of a fraught romance,” Jonah is explaining to a pretty young woman standing near her parents. “Ill-fated and ill-conceived, between young Manon Lescault and the Chevalier des Grieux. Although Jules Massenet’s shortening of the title from its original L’histoire du chevalier des Grieux et de Manon Lescault signals Manon’s role as the clear protagonist of the piece. Which is something of a shame, for as the character of Manon is a vain, materialistic and self-absorbed social climber, it is difficult to sympathize particularly with her.”

“Like Sean Astin in Encino Man,” I chip in. “That fucker is the least likeable character in a movie with Pauly Shore in it.” Every minute, the young woman is looking less thrilled to have found other people her age.

“Still worse,” says Jonah, “she is charmless, whereas even the tarts of whose ‘laughing life of luxury’ she is so envious in the opening act, have about them an air of wry, mischievous vitality that makes them confusingly some of the more genuinely likeable characters of the piece. The Chevalier des Grieux, who is at least sincerely devoted, is unfortunately a fool, made pitiful by his love rather than exalted by it. When he retreats into the seminary after his first betrayal by Manon, he is (rightly) ridiculed by his father who sees his renunciation is but a petulant, melodramatic cowardice, puffed up and decked out in the somberness of piety.

“Over the next few acts, she’ll continue to be unlikeable and he continues to be devoted until he is ruined and she dies for no apparent reason, in some sort of weird field,” Jonah continues. “If Massenet intended this to be a sort of commentary on the vanity and deception of romance itself (for which I have no evidence but it seemed one way of making sense of the thing) it is lost on the audience. While there are genuine comic moments throughout, the touch of irony is too light to propel it out of the realm of failed tragedy into that of satire.”

Jonah is the only person I know who can speak in parentheses.

A weird buzzer goes off, like in high school, and everyone files back inside. We’re not allowed to take our drinks in so we finish them off and hand them to an usher.

“Well, there’s no doubt that the players have prodigious voices (although sadly my prodigious ignorance leaves me unable to situate their prowess relative to the standards of excellence or taste of the medium itself), but when one is subject to soaring vocal acrobatics in every scene, whether the characters are ordering wine at the inn or struggling in the grip of mortal sorrow, the effect is somewhat flattening, or produces a flattening of affect.”

“In spite of however many beers a given audience member may have consumed in the parking lot beforehand,” Jonah adds.

“The sets were cool though, right?  And the lighting was heavy.”

“Yeah, sets were wonderful; whoever was in charge of the staging and lighting should be congratulated on their purples.”

“I heard there’s a short shorts-themed party up North.” ■