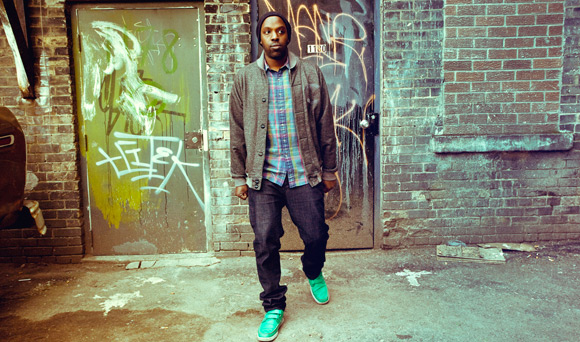 While many of this country’s rap music lovers embrace and promote the term “Canadian hip hop” — waving it like a defiant flag which separates our homegrown creativity from that of our neighbours to the south, who birthed and bred the form — just as many loathe the phrase, and with good reason.

Good art has no borders.

Yes, Kenya-born, London, ON-raised, Vancouver-dwelling microphone crusher Shad (sometimes known as Shad K, legally known as Shadrach Kabango) beat out Drake’s internationally best-selling Thank Me Later at the 2011 Junos in the category of Rap Recording of the Year. Yes, his highly creative, homemade-style videos to hits like “The Old Prince Still Lives at Home” and “Rose Garden” appear to have been done on a Littlest Hobo-sized budget. And yes, Shad is proudly Canadian.

But one need only follow the stand-out, go-to American and European hip hop blogs and sites (read: not WorldStar or anything remotely associated with WorldStar) to know that Shad’s reach as a wordsmith and a careful craftsman have less to do with the colours on his flag than his skill as a performer and his artistry in creating solid, whole rap albums — three to date, including 2010’s breakthrough TSOL, and its follow-up expected to drop this year.

In town tonight for a sold-out double-bill co-headlined by Maritime treasure Buck 65, courtesy of the good folks at Osheaga, Shad took time out from the studio to speak to Cult MTL via email about beats, rhymes and livin’ right.

Darcy MacDonald:  I always like to ask someone about their hobbies outside making music, or the stuff that has been of influence peripherally. What’s been keeping your mind and body active of late?

DM: Congrats on finishing school (an MA in liberal studies at Simon Fraser). How do you find it now, not having to balance your time with the one-year-on school/one-year-on-music kind of lifestyle you were kicking it on before? Now that you have that degree, was it worth the extra self-challenge?

Shad: Thanks, man. It’s been more formative than I thought actually. And it was just a privilege to get to take time out to learn like that and think about some big ideas. It’s also good for me now to be fully in the real world and working hard on music again.

DM: I just found out you’ve decided to become a perma-West Coaster. Obviously you spent time for school there, but what made you take the full plunge to stay out west?

Shad: Long story short, I’d say circumstances have just kind of conspired to keep me out here longer than I planned. I’m not sure how much longer I’ll be here, but I have no firm plans to move back to Ontario yet. My life here is great. I feel really lucky. It’s healthy and grounding. I think I’ve grown up a lot out here.

DM: I checked out your “Peace” demo with Skratch Bastid — kind of a different look for both of you. I read that although you’re on some battle/freestyle shit lately, this was a step back to more developed songwriting. What approach are you guys taking, and what can we expect from the forthcoming EP? Is this demo a good example of the general flava?

Shad: We have another song coming out in a day or two that’s totally different, actually. The collection him and I are doing is gonna be kinda varied, but we have our roots in pretty much the exact same hip hop, so there’s something consistent in all of it. It’s always a very easy process with Bastid, very natural. We just got together a couple times in his studio and continued the momentum from the album sessions. But yeah, this collection will have more fully developed songs, conceptually, compared to what I’ve put out lately, but looser than what’s on the upcoming full-length, though.

DM: On the freestyle/battle tip, though, I really like your jawn on the (free) J Period Rage Is Back tape over Big Daddy Kane.

I interviewed the author of Rage, Adam Mansbach, last week, and I asked him about your contribution.  He said to me something along the lines of, “I didn’t know who he was yet and J is telling me he is gonna lace BDK. I was like, ‘He better be good!’”

He was impressed. But what is your relationship to (highly acclaimed mixtape producer) J Period, and how did it feel going in knowing you are gonna fucks wit’ Kane on a potentially BIG tape? Also, for fun, what did you think of the novel?

Shad: Ha! Glad both of you liked it. J told me he played it for Black Thought, too, which was very cool to hear, since I feel like I learned pretty much everything I know from listening to him. I met J one night in New York — he got introduced to my stuff through some folks at Decon Records. We linked up, had a great time and he’s been kind enough to include me on a couple of his projects since then. Always an honour to work with him. He’s a tremendous guy and possibly the best at what he does. As for going in on the Kane beat, I had to come at it like almost trying to do an impression but putting my own spin on it, if that makes sense. Do my thing, but put a little nod and wink to the greats in there somehow. I was happy with how it turned out.

I haven’t read the novel yet, by the way. Maybe Adam will send me a freebie.

DM: I really like the artwork with the “Peace” demo, the mic-in-prayer shot. I really respect your ability to rap about Christ without it coming off corny or preachy, which begs larger questions about hip hop, in the sense of, like, no one thinks twice if people rap about God or Allah but somehow, like the line (sorta) goes, “If you rap about Jesus, you won’t get play.”

How do you find that comfort zone between conviction and approachability in your content?

Shad: Thanks, man. Well, religion is a part of my life, and it’s always been a place where I’ve found a lot of inspiration. That’s nothing new in music, if you listen to Bob Marley, Curtis Mayfield, Lauryn Hill etc., but religion in general and Christianity in particular have become more taboo in mainstream culture.

I don’t think it needs to be that way, though. It’s just people. I can enjoy another person’s story and perspective, and I’m sure they can enjoy mine. I think it can be that simple, and fortunately it is for a lot of people.

DM: How will the live show play out in Montreal? What have you got planned?

Shad: Well, it’s been a while since I’ve been there, so I’m looking forward to just connecting again. Hopefully playing some new-ish stuff, but generally I’m just excited to bring the music and have fun. ■