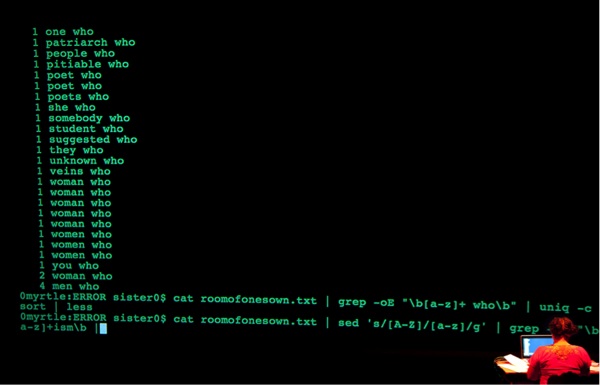 In 1989, the Guerilla Girls conducted their famed weenie count: less than 5% of the artists with work hanging in New York’s Metropolitan Museum of Art were by women, but 85% of the nudes were female. Of course, things change, however slowly.

When it comes to the world of digital arts, women are no longer rare outsiders, but form a visible, albeit still internationally scattered, minority. Alongside women’s increased presence in the discipline, the focus of feminist issues has shifted away from questions about access to reflections on the more ambiguous and multi-faceted concerns of feminism generally. Recognizing this new reality, Montreal’s feminist-technology-art hub Studio XX is updating and re-launching its web publication .dpi as a biannual journal.

“We clarified the mandate,” editor-in-chief Sophie Le-Phat Ho says. “[The new] .dpi is a feminist journal of art and digital culture. It aims to create a space for feminist thought in all its varieties. There are many different kinds of feminisms.”

The old version was more concerned with women’s access to technology. “It was founded for women based on the idea that power for women comes from the appropriation of technology,” says Le-Phat Ho. “When Studio XX started it 10 years ago, it was a sort of side project, done last minute, and taken care of by the programming coordinator. Its structure wasn’t clear or well defined.”

Now, though, the mandate is updated. “We want to welcome reflections and showcase feminist aspects of different digital art events and initiatives. We want to build a discourse of feminism in regards to digital culture, especially here in Montreal.”

Since the journal is available online, .dpi serves as a community space for those associated with feminism and digital arts well beyond the borders of our fair island. “The concept of place is very important for .dpi, as is a sense of a community,” Le-Phat Ho says, “We want to build community through the publication, because it is online that community becomes international. This is our reality today.”

The re-launched publication comes out twice a year with around half the issue dedicated to a specific theme. The types of pieces include critical reflections, documented research analyses, interviews with artists, critiques of art shows and exhibitions as well as book reviews.

“The upcoming issue has a theme of hacktivism, guest-curated by activist and scholar Christina Haralanova,” says Le-Phat Ho. Especially intriguing are cross-disciplinary artist interviews with other artists. For example, dancer Margaret J. Mater interviews Nancy Mauro-Flude, who does live coding as part of her art performances. Other interviews in the new issue are with computer-bug composer Valentina Vuksic and local text-image-place masher Edith Brunette. Finally, Linda Hilfling plans to hack .dpi and circulate her leet-speak-ridden version in generally male-dominated hackerspaces.

In addition to publishing a theme-based issue twice a year, .dpi offers more immediate responses through its new blog. “A blog is more flexible and spontaneous,” Le-Phat Ho says. Although not formalized, Le-Phat Ho expects that the blog will have collaborators and contributing editors who publish regularly on it.

“.dpi is very open,” says Le-Phat Ho. “We’re open to new ideas. We want people to get involved. .dpi has a lot of potential, and it’s exciting to create something new and in tune with the state of the world today.” ■