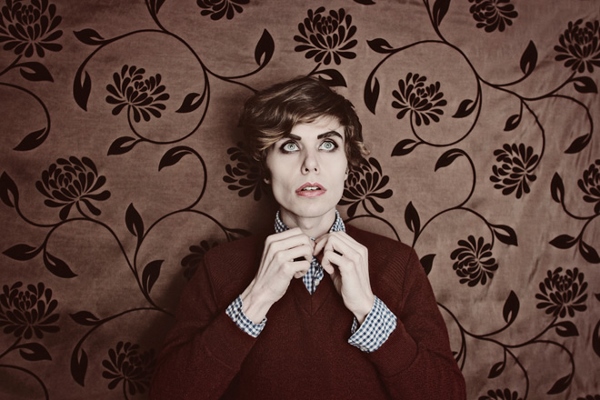 Privilege is a series of EPs by Parenthetical Girls, a band led by cat person, Smiths fan, Portlandia alumnus and former music journalist Zac Pennington. (Read the story behind that band name here.) Their music matches gorgeous melodies, timeless pop arrangements, orchestral snatches and glam grind with lyrics that are clever, sexy, sad and funny, never all at once but with enough overlap to occupy your brain while your body absorbs the sumptuous sounds. But these songs, produced over the last two years, also benefit from a certain looseness that was missing from the band’s denser early material, and from sneaking in savvy slices of homage to some of the great bands that have inspired them, from T-Rex to David Bowie to Depeche Mode.

Departing from conventional formats and conventional wisdom (it cost them plenty of money out of pocket), Pennington and co. doled this material out as a series of five 12-inch vinyl EPs, each limited to 500 copies, all currently out of print. But because they’re particularly proud of this project (so much so that Pennington is considering dissolving the band now that it’s done), Parenthetical Girls have packaged an abridged one-disc version of Privilege, a record that they’re supporting with North American and European tours to spread the good word further than their devoted cult flock.

After having profiled them for a Mirror cover story almost exactly a year ago, I called Pennington last night for an update on all things Parenthetical. I watched a guy get arrested outside my apartment as the band prepared to play a show in a small, sleepy Connecticut town.

Lorraine Carpenter: So tell me about this abridged Privilege record.

Zac Pennington: We were looking at it as the best of the EPs, a condensed version. The EPs are still special, unique pieces — there are songs that are only featured on the EPs — but this record will hopefully expand the audience for the songs. I really wanted other people who didn’t necessarily get in on the ground floor of this esoteric two-year project to be able to experience what we thought were the best songs in the series. People are still really married to the album format, weirdly, and think of it as more valid.

LC: For people like me who are missing one or two of the EPs, or people who discover you through this record and want to own the rest, is it possible to buy them anywhere, apart from eBay?

ZP: I have complete boxes that I’m selling for an astronomical price. I have about 20 of them, which I’m selling for $200 a piece, and I realize that’s totally obscene, but I feel like I would be retroactively punishing people who did the work of staying up on it for those two years if i made it a reasonable price.

LC: So after this tour, what’s next?

ZP: I guess this is the place where everybody ends up when they’ve done something far-reaching like this. Part of me feels like Privilege is almost the perfect bookend to the whole Parenthetical Girls project, and it’s something that I’ve been grappling with. When I look at all the songs, there’s this recurring theme of companionship; when I was laying out the words or the artwork for the album, throughout all the records there’s this concept of “we,” this group idea. For a while I thought I had a grasp of what the “we” was, but I was mistaken. The “we” is this weird dialogue that’s happening with me and Parenthetical Girls; the we is me and Parenthetical Girls, and on the fifth record in particular, there’s a feeling of eulogy for that relationship.

I could totally understand Privilege being the last thing that Parenthetical Girls ever does. I’m still totally in love with the [band] project and would really like to continue doing it but I also feel like it could be a good way to go out if we were to go out. That doesn’t mean I’d stop making music — I have a lot of songs that are gestating in a good way, but I don’t exactly know how they’ll manifest yet. When we’re back, over the summertime, that’s going to become more clear. ■