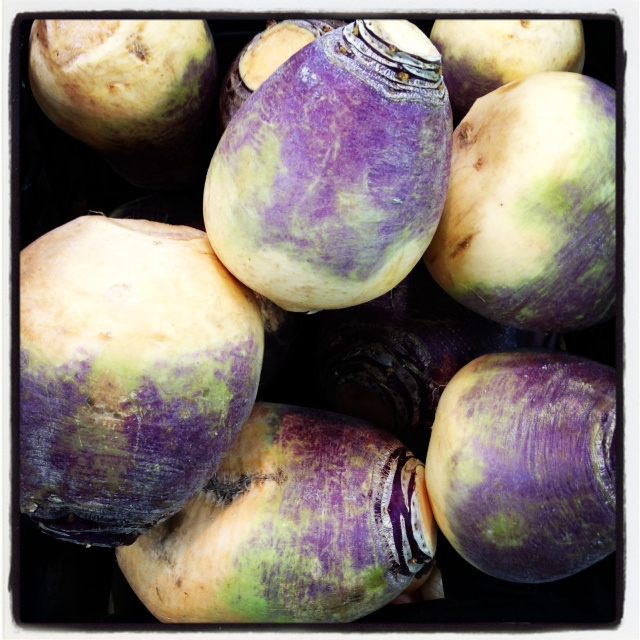 A tasty treatment for a much-loathed winter vegetable. Photos by Stacey DeWolfe

Ask anyone who knows me well: when I become excited about something or someone, I become quite obsessive. I am a staunch supporter, a loyal fan. My bookshelves chart the narrow course of my passions instead of providing a broad overview of a lifetime of reading: the Paul Austers take up most of the top shelf, the Philip Roths have ownership of the bottom two, and the Murakamis round out the middle.

Things are no different in the kitchen. In fact, I spent much of 2012 in the grips of a full-blown foodie crush on celebrity chef David Chang (of the Momofuku empire, not to mention Lucky Peach and several guest spots on Treme) — one that culminated in December in a hilariously bizarre dream in which we dined out on the town and then spent the evening gently spooning. Since Christmas, however, I’ve had a new culinary boyfriend: his name is Yotam Ottolenghi.

As nobody in Canada (or at least, nobody I know) seems up on Mr. Ottolenghi, a short bio is required: he is a star in London, where he writes an excellent food column for the Guardian, hosts several cooking and travel-themed television shows and oversees a handful of extremely successful restaurants and bakeries. As is my wont, I sat down to his read his new cookbook, Jerusalem, one day after Christmas — the first read is always more literary in character — and discovered that this was a book full of ingredients and flavour combinations that were unfamiliar to me. I decided that spending some time working through the recipes would help to extend my own culinary vocabulary, and so that is what I have done: chicken with clementines and arak (an anise-flavoured liquor), eggplants stuffed with pine nuts and lamb and beets with yogurt and zaatar.

This week, I ventured into some seriously unknown territory with a vegetable I truly dislike: the large, yellow turnip (another of the vegetables that fill up the local panier in the cold winter months). We ate mashed turnips on a weekly basis when I was a kid, and I could never wrap my taste buds around their watery, gassy texture and bittersweet flavour. When a friend told me that thinly sliced, dry-roasted turnips made excellent dog chews (they are quite good for you, and your dog, in an anti-oxidant, full-of-fibre kind of way) I realized that I would never again have to eat a turnip. Then I saw Ottolenghi’s intriguing recipe for veal and turnip cake and figured if anyone could change my mind about this brassica, it would be him.

The primary flavour of the dish is a Middle Eastern spice mix called baharat; I couldn’t find a recipe for Ottolenghi’s version online, so used this one instead: in a small frying pan, add one-and-a-half teaspoons each of cumin seed, coriander seed and whole black pepper, plus five allspice berries, four whole cloves and the seeds from four cardamom pods. Roast them until toasty, keeping a close eye on them so they do not burn, and then dump them in a spice grinder. When they have cooled, grind them to a powder, empty them into a jar, and add a half-teaspoon of paprika, one of cinnamon and a healthy grating of nutmeg. Stir to mix.

Next, put one cup of uncooked white basmati rice that has been rinsed and drained into a large mixing bowl. Add about half a kilo of raw ground veal, a handful of chopped parsley, two-and-a-half teaspoons of the spice mix, one teaspoon of salt, another half-teaspoon of cinnamon, one of hot chili flakes and one tablespoon of olive oil. Mix and put aside.

In a second bowl, mix a can of chopped, canned tomatoes, one-and-a-half cups of chicken stock or water, a quarter-cup of tamarind paste (which is easier to work with than pulp, and can be found at any Asian grocery store), two-and-a-half teaspoons of sugar, some sprigs of fresh thyme and salt and pepper to taste. Put aside.

Peel and slice two medium turnips into thick discs. Heat some olive or grapeseed oil in a cast iron pan and fry each slice until golden, about three minutes per side. Drain slices on paper towel and season with salt and pepper.

The final step is assembling the dish in a way similar to making lasagna: spread a layer of tomato sauce on the bottom of a casserole dish and then add a layer of the turnip slices. Put a third of the meat and rice mixture on top, and then repeat: tomato, turnip, meat. Save some tomato sauce to drizzle over top and then slide a spatula around the edge of the casserole so that the extra juices fall down to the bottom of the dish.

Ottolenghi says to cook the dish on the stove-top, but whenever I try to do this with rice dishes, they always burn. So instead, I put the casserole on a burner and brought the liquid to a boil, then put it into a 375-degree oven. Cook for one hour, covered, then remove the lid and cook for about 30 minutes more. Test the turnips before turning off the oven to make sure they’re cooked.

As you might suspect, the dish is quite unusual, but also quite delicious. We ate it with a simple salad of cucumber and yogurt with lemon zest. This recipe serves four, and in my experience, is best eaten on the same day, so invite a few friends over and go to town. ■