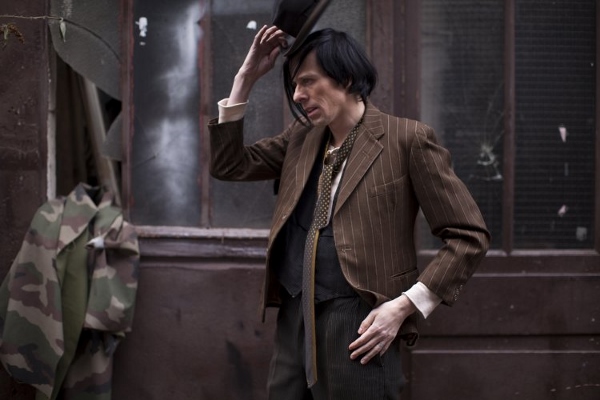 “I hope that, for your younger audience, you could quote me verbatim: this is not a dinosaur act.”

Based in Paris, American singer, songwriter, musician and producer Ken Stringfellow has been a member of some bands you might know: he founded the Posies, played with R.E.M. in the ’90s and was part of the reformed Big Star from the mid ’90s until the death of singer Alex Chilton in 2010.

But he wants everyone to know that despite these associations, he’s a solo artist first. His latest, fourth record is Danzig in the Moonlight, a collection of songs revealing an approach to indie rock that’s at once refined and universally appealing.

When I reached Stringfellow by phone last week, he was on the road in Ohio, and had just recovered from nearly losing his voice early in the tour, due in large part to the pollution in Boise, Idaho (who knew?). We talked about playing with bands vs. solo, the Dutch connection and how the part can be bigger than the sum.

Lorraine Carpenter: So how’s the tour going?
Ken Stringfellow: I’m starting to hit my stride, that’s for sure. I’m not 100 per cent back yet, but what I can do with 90 per cent is pretty awesome. I work with a very wide, dynamic range with my voice, making the intensity match the emotion of the song I’m singing. When I’ve got all guns firing, it’s pretty powerful. Last night in Indianapolis, I stood in front of this small room of people and just let ’em have it. It was a really satisfying show.

Even the fucked up show in Salt Lake City was kind of great. I was so limited that I had to be really creative to work around it and it made everything more intense in its own way.

LC: So you played the West Coast leg of the tour backed by a band, the Maldives. Do you have a preference, playing solo or with a band?
KS: I like playing totally solo. There’s a different kind of magic that happens at those shows that’s  crucial to what I do.

LC: I noticed that your record featured musicians who were almost exclusively Dutch. What’s that about?
KS: France is a wonderful, magical place to live, and Paris is a really exciting city with so many incredible things going on. But as far as indie rock, it’s really not happening there. Amsterdam is much more in synch with what I do, and of course everybody speaks English there. Working with Dutch bands has been my bread and butter. My sensibilities are very much in tune with that music scene — there’s a lot of shit going on there.

I teamed up with this guy named JB Meijers, who’s a very well-known producer and musician in Holland, and that’s opened so many doors. I’ve been working with the cream of the crop of the biggest artists there, big records with big budgets, most of whom sing in Dutch, so you’ll never hear them.

What’s nice about the A-level musicians in Holland is that they’re not cheesy; they’re cool, and they have good taste. In fact, you can’t really be cheesy and get to the A-list. That might be an asset here in the States, but it’s something that would hold you back in Holland.

LC: So when people see the list of bands that are always listed beside your name, and then listen to your music, do you think the connections are clear?
KS: They might like what they hear, so yes, potentially. But art is very open to interpretation.
The whole reason I’m out here touring, playing for anywhere from 20 to 500 people a night — it’s totally random — is to show that this is a unique musical identity that I’ve made with my album and with the three albums previous, and that the live show has this very particular vibe.
This album is so much more than anything I could’ve achieved even with my own band [the Posies], as much as they’re great. This album is way more musically developed and sophisticated, and my live show is way more intense.

Unfortunately, for the average young indie rock kid, seeing these older bands by my name might be a turn-off. They might think, “Here’s a dude trying to milk his past glories and keep alive out there,” and that’s so not true.

I work with bands in the studio like fucking every day who are like 21 years old and they’re awesome and they’re cool and they’re getting great reviews. I’m in that world every day as a producer — I’m not some dude sitting in my suburban house trying to earn money because I need designer towels. This is a real art project, and it’s a real intense musical vibe live. ■