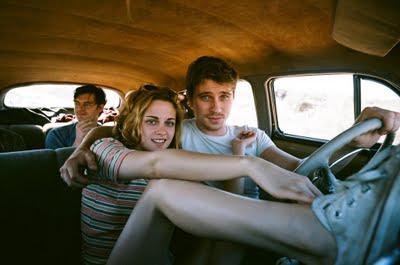 Sam Riley, Kristen Stewart and Garrett Hedlund in On the Road

The film adaptation of Jack Kerouac’s On the Road has been a long time coming; Francis Coppola has been trying to make the film since buying the rights in 1979, going through at least two high-profile aborted attempts. It’s finally happened, with Brazilian director Walter Salles (Central Station, The Motorcycle Diaries) anointed by Coppola to take the helm.

After all that, you can’t help but wonder why it took so long. Though it’s rambling, dated and certainly not plot-driven in any kind of traditional sense, the novel is nowhere near as “unfilmable” as that other Beat Generation classic Naked Lunch. Packing the film with stars who were no doubt happy to exchange lower paycheques for meatier material, Salles pulls off as convincing an evocation of late-’40s/early-’50s bohemia as could reasonably be expected.

For those of you who didn’t go through a Beat phase, the story is basically a roman à clef about Kerouac’s years of road-tripping with his literary buddies, notably supreme beatnik Neal Cassady (renamed Dean Moriarty in the book). This iconic figure came to embody, for both Kerouac and his readers, the carefree spirit that motivates hipsters of all generations to throw responsibility to the wind and devote their lives to sex, drugs and thrill-seeking, all nominally in the service of artistic glory.

Sam Riley (who played Ian Curtis in Control) is Sal Paradise, Kerouac’s autobiographical figure, and Moriarty is played by Garrett Hedlund, best known to date for Tron: Legacy. Hedlund’s good looks and charm make him quite believable as Moriarty, whose ravenous appetite for sex (with both genders) and all kinds of trouble lead to many adventures and leave multiple messes in his wake.

Moriarty’s long-suffering girlfriends are played by Kristen Stewart and Kirsten Dunst, both of whom play against type and make out pretty well. Riley, whose character does more observing than participating in all the shenanigans, is good, too — although, if I may be allowed some locally specific nit-picking, the French-Canadian accent he tries to pull off (Kerouac lived with his Québécoise mother on and off his whole life, and spoke French with her) is from some other planet.

Viggo Mortensen has a great cameo as Old Bull Lee, the William Burroughs surrogate, in a Louisiana sequence which also features Amy Adams and Elizabeth Moss. Maybe it’s that I’m more of a Burroughs man than a Kerouac man, or maybe it’s that cast, but I found myself wishing the gang had spent more time there. But it’s On the Road, so they have to move on.

Which reminded me that some of the film’s flaws are inherent in the source material. It hasn’t got great reviews so far, but I think they’re a little unfair. Sure, the plot is meandering and the characters aren’t too deep, but you know what? That was the case in the book as well. Salles has a nice visual style, the cast is good and the film totally captures the bohemian spirit, its fun and energy as well as its latent sadness and desperation. Plus, today’s even looser morals mean that the sex, and the gay content, can be more explicit. Really attractive people whooping it up and having polymorphous sex with each other — what’s not to like? ■