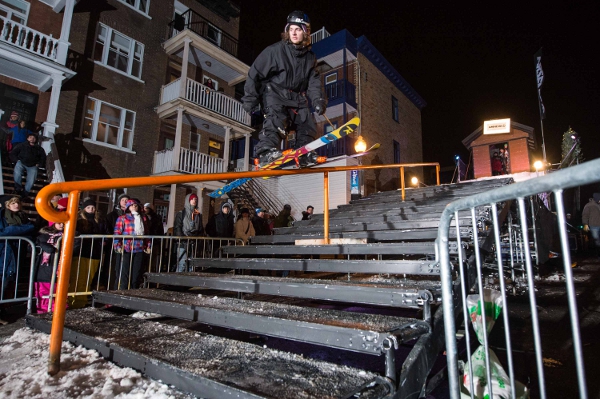 Ever wonder what 7,000 square feet of that snow found behind hockey arenas year-round would look like in one place? If you head to St-Denis this weekend, you’ll see just that — along with urban skiing and snowboarding by some of those sports’ best as the third edition of the Amnesia Shack Attack gets underway.

“The idea for the contest comes from the roots of the sports,” says event organizer Micah Desforges. While skiing and snowboarding didn’t quite spring from urban areas, riders have long made use of obstacles like stairs and handrails, bringing skateboard tricks to more wintry sports. And, come Saturday, that’s exactly what those on hand will be doing, on a pile of artificial snow trucked in from Drummondville.

“We did [the event] in the past in the parking lot in front of Foufounes Électriques, so it was more like a traditional pre-season rail jam,” Desforges says. This year, though, will see an expanded course, including a rail running the length of “kind of a huge staircase,” a pyramid and more. “The perfect place to keep it urban, to keep it fun and really have it as slopestyle was really St-Denis.”

On hand to compete for a $6,000 pot will be some of today’s hungriest skiers and snowboarders, among them riders like Zach Aller and Jeremy Cloutier, who happens to have won Dec. 1’s Shack Attack contest in Quebec City.

“It’s not a pro jam, so it’s not the big U.S. stars coming up, but we have all the big Quebec riders,” Desforges says. Thanks to its locale, and the fact that watching it is free of charge, Desforge hopes the contest exposes these athletes to a new audience. An urban event, he figures, will draw “more mainstream coverage than if we do it on a mountain.”

“All those TVA sports and by media may not pass by at the mountain, but when we’re closing St-Denis this weekend, it’s making a lot of noise,” Desforges says. “[It’s] cool with all the more core media, but it’s a major plus for everyone to get attention from the whole population. That gives everyone a big push, I think.” ■