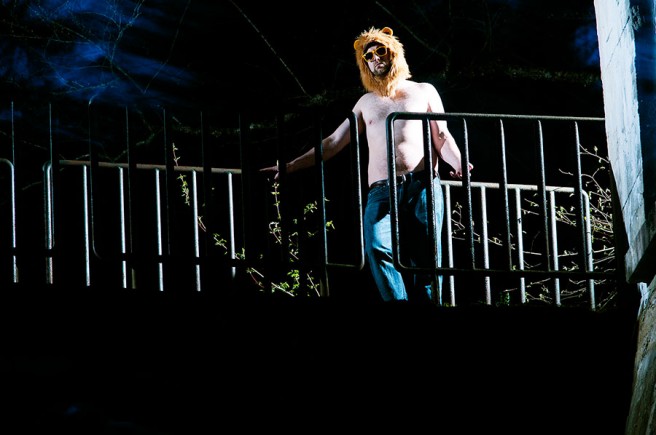 Unlike the toothless lion panting hungrily on the cover of Atherton’s No Threat LP, the Ottawa rapper/producer knows exactly how the fuck he wants to get his fill on after his Montreal show tonight.

“Tuesday morning, I’m definitely going to Bagel Etc to get my breakfast. That’s what I’m really looking forward to! That’s my shit. Can you shout that out in the interview, please?”

You might know Atherton from now-defunct party-rap shenaniganners the Leathers. You might know him from his work with DJ Sire. Or maybe he nodded and said hello to you that time outside the library. But if you don’t know him by now, like KRS said — or, well, like Alanis said — you ought to  know.

Darcy MacDonald: So first of all, congrats on the record! The reception has been really great, especially on the CMJ charts. Did you have it worked (professionally) for college radio, or did you do that promo yourself?

Atherton: [laughter], imagine!? It would be amazing if that was just a natural occurrence! No, that was definitely some hired guns. [It was] a group out of Minneapolis called Tinderbox. And I knew some other dudes, like [friend and occasional collaborator] Fresh Kils and them had been using them as well. But the reason I really went with them is because they approached me. One of them actually had his own hip hop blog, and he had been writing about the album. He was already a fan, so [I had] him get behind it as a publicist as well. And maybe he just does that, maybe that’s his move. Like, I’ll write about you on my blog a bit and then…[laughs]…I’ll approach you and we’ll jerk you off a little bit, and then you’ll jerk me off, basically.

DM: You had told me that No Threat was a mix of songs that you had been working on for a while and newer stuff to tie it together. Compared to the experience of making the Leathers album, for example, what were some of the differences?

Atherton: Collaborating is a lot easier. I guess it could be difficult if you don’t work well with that person, if you’re butting heads all the time. But collaborating for me is just easy, and the easiest album I ever made was the Leathers record. We went into the studio with 10 beats and two songs written and had an album done in five days. In that relationship, we were just having fun, so there was real pressure to, um — there was more room just to be left alone. Like, you’d write a verse, and you didn’t have a chance to second-guess it because your buddy is like, “Yo, that’s dope! Record.”
With the No Threat record, there was just a lotta time with, like, me by myself in my room, going, “Argh, this is bullshit!’ You know?” There’s just a lotta room for being critical. I think that was the biggest difference. But then, I think I’m a lot more connected to the No Threat record just because I spent so much more time with it. There was more work there. It’s like the Leathers record was a [unintelligible] fling and the solo record is a true romance.

DM: Did you say “secret fling”?

Atherton: No, summer fling! You know, like [sings], ”Summer lovin’, John Trah-vol-tah-ah!” I feel overwhelmed [with] the thought of the next record because I sat on that for so long and I put so much thought into that. I just had it so planned out and had so much time to think about it, I feel like the whole thing, conceptually — like, you know, the title of the record. Now I think, “Well, shit, how do I get something that I like just as much as the last one?” You know? Because I don’t wanna be the douchebag that just calls it No Threat 2. I hate that shit. I’m thinking of other anagrams I can find for “Atherton.”

DM: At what point in your life did you realize that “no threat” was an anagram of your last name?

Atherton: That goes back to the MySpace days. You’d get a lotta random people making contacts. And this one person, his thing was to add you and then come up with an anagram of your name or whatever. So he figured that out and I was like, “Shit, that’s pretty boss.”

DM: I wanted to ask you about Freestyle Thursdays, which looks like it went the way of the dodo. What happened?

Atherton: No, I mean, hopefully it comes back! The whole plan is to have it back in 2013. What happens is we do them for three months, 16 episodes, so it’ll be back for January, February, March, April. I just got money from MuchFACT, a grant through their website, so hopefully that can go towards that too.

DM: The Slimer vid will forever be one of the funniest things to me.

Atherton: [laughing] Well, I’m glad someone enjoys that, that it wasn’t totally inane.

DM: What does your middle initial “F” stand for?

DM: Francis is a rightly name. That was my grandfather’s middle name.

Atherton: [in an Irish brogue] I’m named after me grandfather, Devin Fuckin’ Atherton. He was a wee one but ’e packed a powerful punch.

Atherton: I could do Threat On. That’s another one, you know, like, continue the threat? (In a hippie drawl) “Threat on, bro. Yeah, bro. Threat on, man.”

Atherton: No, I actually — one thing I feel pretty confident about is keeping the hair. I think I can grow hair anywhere, too. I’ll have too much hair — ears, nose, back, you know? Even back hair.

DM: Match and mix that shit. I dunno, I lost it on top, brother.

Atherton: I got some for you, bro.

DM: I will wear an Atherton merkin of back hair if you whip that shit together for me.

Atherton: I’ll get to work on that, figure out how to make that shit grow. ■