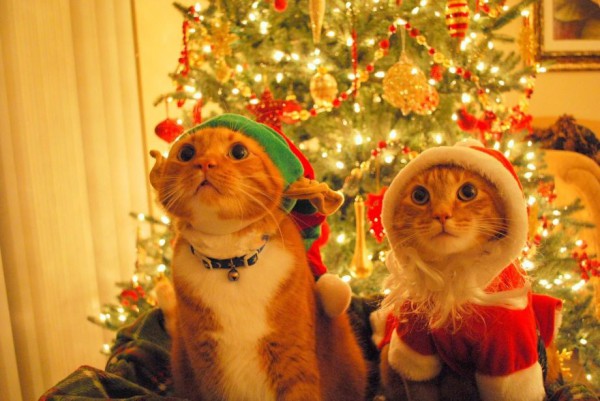 Christmas is the season of sharing, family, giving, community, all that great heart-warming stuff. It is also the season of non-stop terrible music and obligatorily getting drunk enough to do karaoke with co-workers, those familiar strangers who are at once intimate friends and alien life forms who happen to share your daytime water supply, fridge and maybe a printer or fax machine or something.

While Montreal’s bitching winters make your “TV sweater” the closest thing adulthood offers to a blankie, the next month will be crammed with enough fancy parties to make summer wedding season look sober and relaxing. Here’s how to dress for it.

Dress for photographs
Christmas parties are like weddings, in that everyone tends to get a little fast and loose with the boozy camera action. If you’re the kind of person who enjoys seeing flattering pictures of yourself on Facebook (and, for the record, this is actually the only kind of person that exists), then this might bear keeping in mind. So no white underthings under dark clothing, please, as people’s flashes will x-ray right through that business and show everyone on the interweb your skivvies.

Dress for drunkenness
After I’ve had a few wobbly pops, my ankles tend to feel the same way. For big drinkie events on someone else’s tab, then, no heels higher than one or two inches.

In general, prepare for degeneration: no complicated accessories, and if you’re wearing makeup, make sure it’s nothing tetchy that you’ll have to maintain all night, because that shit’s going right out the window the second you start feeling breezy. After a couple of proseccos, that mascara wand is NOT making it out of the weird-purse-clutch thing that you’ve been waiting all year for an event fancy enough to carry it to — which clutch, incidentally, you should also try to bring home with you, if you can manage it. Your keys are in there, yo.

Dress for waist expansion
Christmas is above all the season of rich food and an endless parade of cookies. Too many times I’ve opted for a cute look rather than an elastic waist band, and too many times I have felt like a festering sausage after a second scoop of mashed potatoes.

Dress UP, dude-bros
Male sartorial conventions being what they are in this day and age, dude-types have basically three dress-up options for festive occasions. It boils down to this: tie vs. bowtie vs. open-collar Oxford exposing your chest pubes.

The tie is proper and safe; it basically says, “I’d like to keep my job and/or partner.” The bowtie is cheeky and unique, but not inappropriate; it says “I’m damn fun, and might show you my take on the Worm after two more rum n’ nogs.”

And, if it feels like it’s the last option that’s screaming your name, then you, my friend, have contracted a nasty case of axebodysprayitis of the wardrobe. The open-collar-button-up-exposing-chest-pubes look is supposed to be ASPIRATIONAL: it is the trajectory that your evening is taking you on, so starting the party with your luscious pectoral locks out is like a big, fat party spoiler.