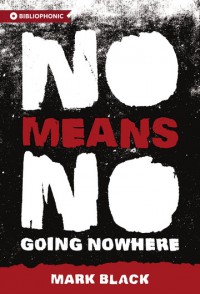 Invisible Publishing’s Bibliophonic series offers short, inexpensive books about the careers of influential Canadian bands, and two recent volumes profiling NoMeansNo and the Deadly Snakes will make great additions to any Canuck music lover’s bookshelf. (And in the interests of full disclosure, both authors are my friends).

As Bon Scott famously yowled, “It’s a long way to the top if you want to rock  ‘n’  roll.” But neither of the bands covered in these short books ever sought fame and fortune. Instead, both Victoria’s NoMeansNo and Toronto’s the Deadly Snakes remained fiercely independent and true to their distinctive visions throughout their careers. I’ve been fortunate enough to witness both bands play live, and they rank high in my list of all-time favourite shows.

Known for dark, philosophical lyrics and intricately written music, NoMeansNo will always be a bit of a stretch for punks looking for something simple. And yet they do play very fast and very loud, and for more than three decades they have remained one of the tightest and fiercest live bands this country has produced. After a dozen albums and thousands of shows in North America and Europe (where they’re beloved), they’re still at it.

Mark Black’s NoMeansNo: Going Nowhere skilfully lays out the band’s origins, introducing founding members, brothers Rob and John Wright, as well as drawing on interviews with John and current guitarist Tom Holliston, among others. Black also unpacks a selection of songs, allowing readers unfamiliar with the band’s catalogue a glimpse of the existentialism and black humour mined in their lyrics.

In the book’s autobiographical opening section, Black humorously recounts his first impressions of the band as a teenager. When he finally got his hands on one of legendary band’s records after years of hearing about them, Black was confused by its complexity and was forced to ask himself the question, “What if I was too dumb for punk rock?” From this inauspicious beginning, Black endearingly details his rapprochement with the band, and thanks to his clear-eyed analysis and enthusiasm, others will no doubt find themselves listening to their music with a new appreciation. 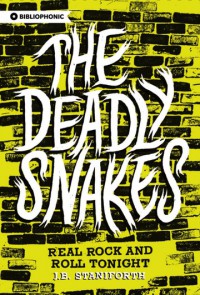 In The Deadly Snakes: Real Rock and Roll Tonight, J. B. Staniforth takes a different approach. Rather than offer interpretation, Staniforth focuses on narrative, giving us the in-depth story of a revved-up sextet of Parkdale punks who played a distinctive blend of rock and soul from 1996 to 2006. This book charts the group’s rise from their humble beginnings as snotty teenagers to their dissolution as refined young men. In between, they toured North America several times, released a peerless quartet of genre-bending rock ‘n’ roll records, fought, made up and managed to break up while remaining friends.

Drawing heavily on interviews with band members, a touching coming-of-age tale emerges between the details about shows, recording sessions and personnel changes. Although Staniforth’s interviews reveal that a few disagreements still linger, none of the former members seem to be losing any sleep over the past. And in an age where every band that ever broke up has gotten back together to play pathetic reunion tours, it is refreshing to read Snakes singer Andre Ethier say, “We went on a fantastic adventure… but it had to end.”

The story of the Deadly Snakes is accounted for here, with all the facts that any diehard fan could ask for, but it’s Staniforth’s tale of teenage punks growing up and growing apart that gives this book a surprising emotional resonance, one which does justice to a band whose music was laden with the deep feelings of youth.

Invisible Publishing’s Bibliophonic is a great contribution to the growing canon of books about Canadian independent music, and I look forward to the next volume. After two titles about all-male bands (following the series’ inaugural volume on Montreal’s The Dears by Cult‘s Lorraine Carpenter), here’s hoping the next one shines the spotlight on some women rockers. Toronto’s Fifth Column, Halifax’s Jale or Plumtree, Vancouver’s Cub and Montreal’s Lesbians on Ecstasy are just a few of my suggestions for great bands whose stories would easily translate into page-flipping reading. ■

There have been 122,145 known infections of COVID-19 in the city. Here’s how that number breaks down by borough.