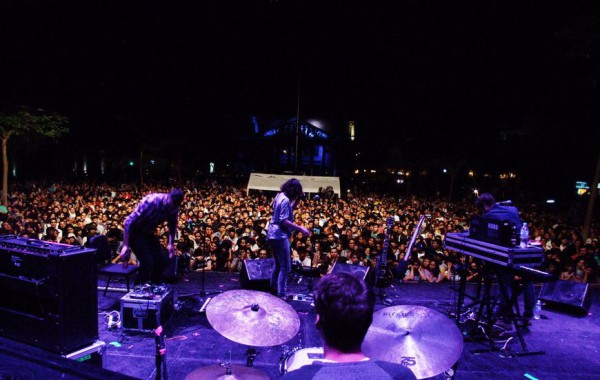 The Luyas in action

Three weeks ago, on an unseasonably warm afternoon not unlike today, Luyas singer Jesse Stein called me from the alley behind Café Sardine. Somehow, it’s the first time we’ve spoken, despite the band’s settlement on my radar, established at their inception in the late/mid-aughts.

They emerged as a branch of Arcade Fire’s family tree via French horn player Pietro Amato and violinist Sarah Neufeld; gaining confidence and strength with each release and tour, developing a distinct language and aesthetic that’s admired across local art pop and indie industry circles. But despite the view from Mile End, the Luyas are not a band (or a brand) that’s recognized by the masses, particularly away from their home turf.

But every album presents a new opportunity to engage the ears, and Animator, released in mid-October by Paper Bag Records, is their strongest statement yet, one that deserves to be broadcast widely. Stein spoke to me about how a friend’s untimely death informed the record, and where she sees her band in the big picture.

Lorraine Carpenter: I understand that your friend died just as you were beginning to write and record. How long did it take you to process that, and begin to incorporate it into what you were writing?
Jesse Stein: I’m still processing it. It became a factor in the writing immediately because we didn’t really stop — we stopped for, like, an hour. I feel like we made the record in my sleep; it just kind of happened through us. But the record’s not about death exclusively it’s about life and death as a part of it. And it’s not all about that person, but it’s definitely a gift for that person. What do you do about the fact that people die? It’s one of those very very normal things, except that we’re not used to it, it’s a shock every time.

LC: How does the title “Animator” come into play given that event?
JS: Well, there was this quixotic quality to the headspace we were in, which was just like, “We’re going to pay tribute and bring life to this person that is no longer.” That kind of romanticizing or mythologizing is very human. “Animator” is supposed to be a way of portraying that reach; humans try for impossible things and it’s sort of beautiful, but it’s still impossible. [The title] is a self-conscious reflection of that idea.

LC: Musically, the record is lively, yet there’s a subdued quality. Was this due to the subject matter or was it an unrelated aesthetic choice?
JS: I wanted to take out the hyper quality [of previous releases] and make something that was patient and grounded, because I wanted people to believe what I was saying. When somebody speaks to you really frenetically, you hear more of the freneticism than the words, and sometimes I feel like that with music too, when music is attention-grabby and doesn’t take its time. I really appreciate a patient delivery; we all wanted to think about that. This record is about life: it’s very repetitive, there are little events and you learn things slowly, and I wanted the music to reflect that, to not have Disney-soundtrack intensity-jumps all over the place. I don’t think that’s what appeals to me any longer, if it ever did.

LC:In terms of where the Luyas are going, are you looking at small headlining tours for your existing and potential audience beyond Canadian or North American borders, or big tours with established bands where you have to sell yourself to the crowd every night?

JS: It’s a tough one, I struggle with it. I don’t like selling myself. We toured last year for eight months straight opening for bands that are bigger than us, and I’m not convinced that that gets you fans. It was great because we learned by watching those bands tour, and some of them are some of my favourite bands, and it was amazing to see the world. We definitely became a much stronger band, but it’s unsustainable to stay a band of this size while trying to make an impact and doing all the work, doing a full-time job for no money. You can only do that for so many years. Not that we’re hard-done-by — we’re totally lucky — but I do want the band to grow, I would like to have more fans please, that would be great.

Ideally, I would love to get to a point where we can tour the world and have our own fans everywhere, but that’s really hard and I don’t think I can contrive it. All we can really do is work on our music and our show and try to be true to ourselves and make sure that we don’t feel like we’re compromising too much. I don’t know what will happen — it’s kind of a crapshoot.
I remember my life’s goal at one point being to play Casa, and I have to remember that: “One day I’ll play Casa del Popolo.” And not too long ago, my life’s goal was to tour to the other side of Canada. Those dreams have come true, and I feel super lucky.

But it’s really important to have more substantial artistic goals for yourself, and my intention is to continue making art and music forever, as well as I can, and to try and remain curious and open-minded so that whatever we make, or I make, depending on where life leads all of us… I think that the Luyas are going to make a bunch more records together and I want them to be brave and authentic. I love playing for people, and I love making records with these people. When we play a show, I can tell that people are reacting to what we’re giving them, and I hope that that continues to happen organically. ■