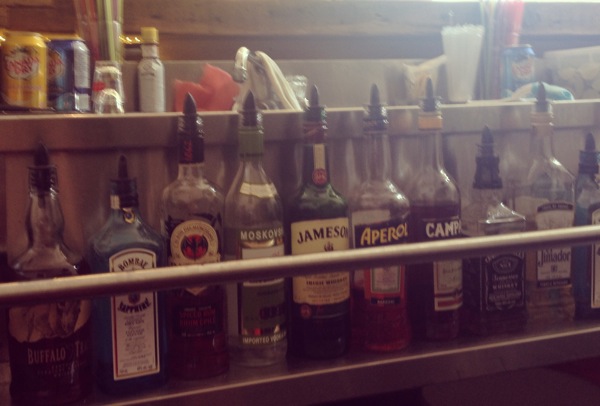 I’ve been waitressing, cocktailing and bartending for more of my life than not. Montreal is one of the better cities to serve in, as there is a strong local culture of great tippers (probably related: there is a strong local culture of underearners), and the places where I’ve worked have drawn clienteles that are friendly, patient and enthusiastic about food and drink, making my job a pleasure.

But you do get the odd asshole. Here are five simple rules you can follow to make sure that this asshole isn’t you.

1. Tip, motherfucker. Some customers didn’t get the memo that tips are pretty much mandatory, or else they have some arcane philosophical reason for not tipping that is no doubt intended to look clever, rather than despicably cheap. (I can remember being horrified as a youth when my grandfather would routinely announce, “You don’t tip on booze,” whip out a calculator and leave exactly 15 per cent on the pre-tax and pre-bar total — effectively stiffing the waiter, since alcohol is often more than half of a table’s bill, especially in my family.)

But here’s the thing: tips are not optional. Waiters are paid less than minimum wage, and that is because their income is to be supplemented by tips. They pay tax on their tips, and, at most establishments, they tip out auxiliary staff — kitchen, hosts, security, busboys or bartenders. This is all calculated based on sales, not tips earned. So when you stiff your waiter or waitress, they can actually lose money on serving you.

Tipping is actually a sneaky way for restaurants to make menu items seem cheaper than they actually are — because part of their labour costs, the part you’ll tip your server, are not included in the bill total. But it is still part of the cost of your meal, in much the same way as the taxes are added on after.

Tipping also works even for purely selfish reasons, as servers tend to have a pretty fastidious recall of customers’ tipping habits. If it’s a place you patronize often, tipping generously buys you good will from your waiter, who is likely to return the favour with more attentive service and maybe even stronger drinks!

If the service is so terrible that you can’t bring yourself to tip in full, then leave something at least, and communicate your dissatisfaction to either your server or someone else working there — otherwise, they’ll just assume that you suck and do nothing to address the problem.

In Montreal, a solid 18-20 per cent of your bill is the standard, as is the $1 minimum per drink model in bars.

2. You will neither touch nor proposition a server you are attracted to, even if he or she seems to be flirting. Service staff tend to be fairly gregarious folk, which is how they end up working in the industry, and good service in North America is often grounded in friendliness and flirty banter. It’s fun. But it’s also part of the job, and the fact that servers are working for you makes flirtation slide pretty easily into sexual harassment, even if your intentions are good. Talking about your server’s body, personal or romantic life and sexual appeal is verboten, unless this is a conversational path that the service worker leads you down.

3. My eyes are up here. Servers move around a lot in restaurants, bars and cafés, and their bodies are plainly on view to their seated customers. It’s a very physical, very public job.

We all look. When you feel compelled to check out a service worker’s assets, though, you should do so with the same subtlety and respect that you would show, say, an attractive colleague or a friend’s spouse, not a can-can girl at the Moulin Rouge.

4. Keep your jerk friends in line. Sometimes you end up with someone at your table who is a boorish jerk to servers, even if they’re otherwise a pretty cool person. Telling them to STFU would be ideal, but if you are unable to (if it’s, say, your boss or new sweetheart’s mother or what have you), it’d be awfully sweet of you to privately let your server know that you at least noticed the jerkishness and disapprove.

Serving jerks can be really hard on workers’ self-esteem and faith in humanity, you guys! Don’t be afraid to make sympathetic-face when the bitch in line ahead of you won’t shut up about her intense need for low-fat soy milk.

And, for the record, a service worker is never, ever, ever a suitable receptacle for your pent-up anger.

5. Clearly articulate your needs. Montreal is a bilingual city, so here especially it makes sense to speak slowly and clearly to your server and ask questions or state allergies, along with needs and special requests, before you order. Eye contact is a pretty good way to ensure that you are communicating effectively with the person you are speaking to, and has the additional benefit of seeming polite in many circles.

And, for Pete’s sake, put your cell phone down while I’m talking to you, son. Servers attend to several customers simultaneously and have other side duties and prep work to do, so they can’t necessarily stand at your table for three minutes while you finish drafting an email. We’re much busier than you are right now, frankly, so please just take a second to tell me what I can get for you.■