It’s a hot afternoon in Laval and a sea of teenage girls are swarmed outside Place Bell, ready to see icon-in-the-making Billie Eilish. About a third of them are draped in highlighter yellow, Eilish’s signature colour. Just last March, the singer made her Montreal debut to a Corona Theatre crowd of a mere 750. Tonight, she’ll play for close to 10,000.

Deep dive into the line. Florence takes a hit of her Juul.

Macdonald cigarette butts and empty sangria bottles cover the floor. Men look like an endangered species — the few that are here are either reluctant boyfriends or divorced dads, each trying to score cool points with their special girls.

“It’s happening!” says Becky to her friends as the venue doors open.

A “Florida rapper” is the only acceptable “Florida man” when it comes to making news. Case and point: opening act Denzel Curry. The Carol City native was chosen as support by Billie for helping pave the way, his dark trap aesthetic serving as the foundation for much of Eilish’s debut album When We All Fall Asleep, Where Do We Go?

The billing is reminiscent of Madonna bringing the Beastie Boys on tour for her Virgin Tour in 1985. However, unlike Madge’s unreceptive fans (the rap group even believe the Queen of Pop brought them onboard to “Sabotage” them), Curry receives a strong crowd response despite his distinctly different sound.

It’s been less than two weeks since the release of Curry’s new album ZUU. The already gruelling task of trying to feel out a new album live becomes even more difficult at a large scale arena where he was not the centrepiece of the evening. Nonetheless, any slight kinks are sure to be worked out by the time the rapper returns in August for Osheaga. 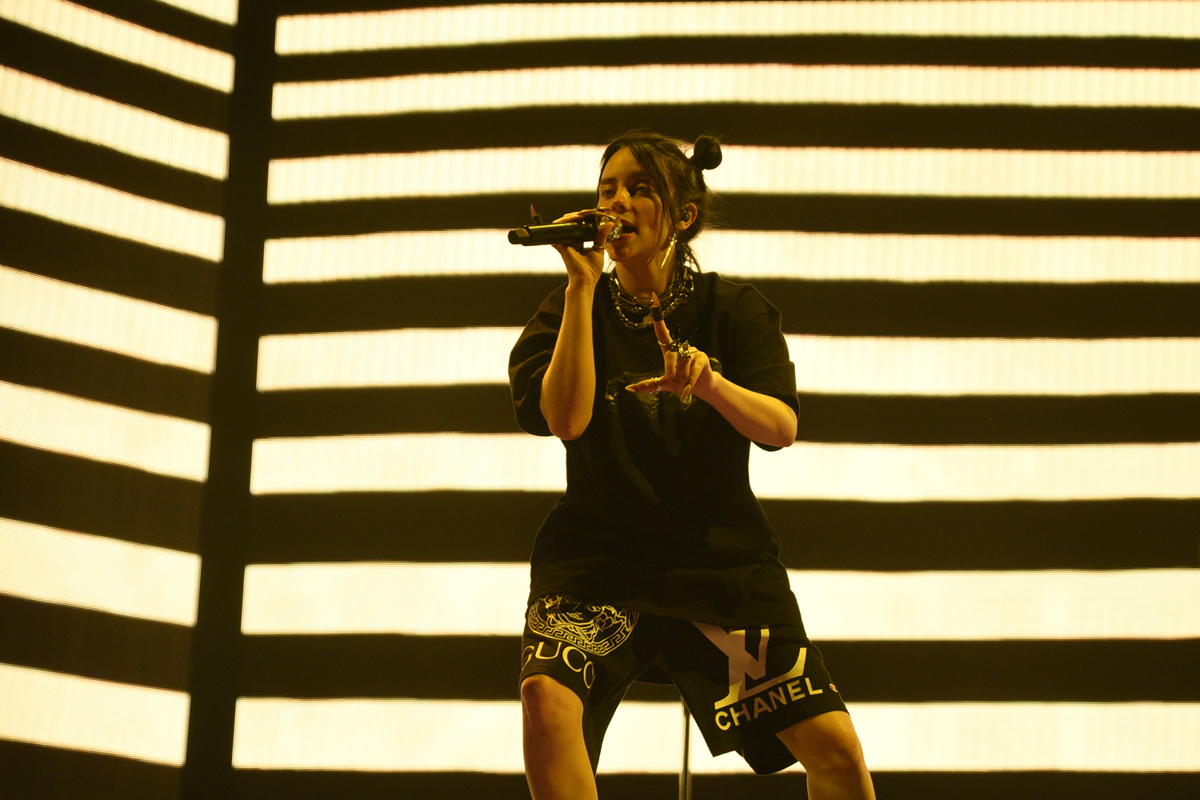 The sun is barely setting by the time Eilish begins to perform. The 17-year-old is practically inaudible for her opening number “Bad Guy,” with the sea of teens overbearing with their word-for-word cries of each lyric. Spotify is projecting “Bad Guy” as a strong contender for Song of the Summer (it currently sits at #2 on the Billboard Hot 100) and Place Bell only reaffirmed such a prediction.

As a minor, Eilish’s show is different than any other pop star on the touring circuit. There is a strong intent not to oversexualize the young star; Billie consciously drapes herself in oversized attire to hide her body from the world.

“That’s why I wear big, baggy clothes…nobody can have an opinion because they haven’t seen what’s underneath,” she explained in a recent Calvin Klein campaign.

The stage set-up is minimal. For most of the show, Eilish occupies the tip of a triangle, with drummer Andrew Marshall on one side and guitarist/pianist Finneas O’Connell on the other. (O’Connell was also the sole producer on When We All Fall Asleep, Where Do We Go? and happens to be Eilish’s brother.)

While minimalist stage production allows for some artists to exercise their god complex — see: Kanye West’s Watch the Throne (with Jay-Z) and Life of Pablo tours, respectively — the sparse set-up allows this arena experience to feel far more intimate. There is no dancing, no extra players. For 75 minutes, all eyes are on Eilish.

Songs from When We All Fall Asleep, Where Do We Go? occupy the bulk of the 21-song setlist. Simply put, these tracks are arena-ready, Eilish supplying anthem after anthem. The few inclusions from 2017’s Don’t Smile at Me EP feel like a thank you to fans who have been with her from the beginning. A past appreciation of these cuts is comparable to reading a book before it becomes a blockbuster movie. 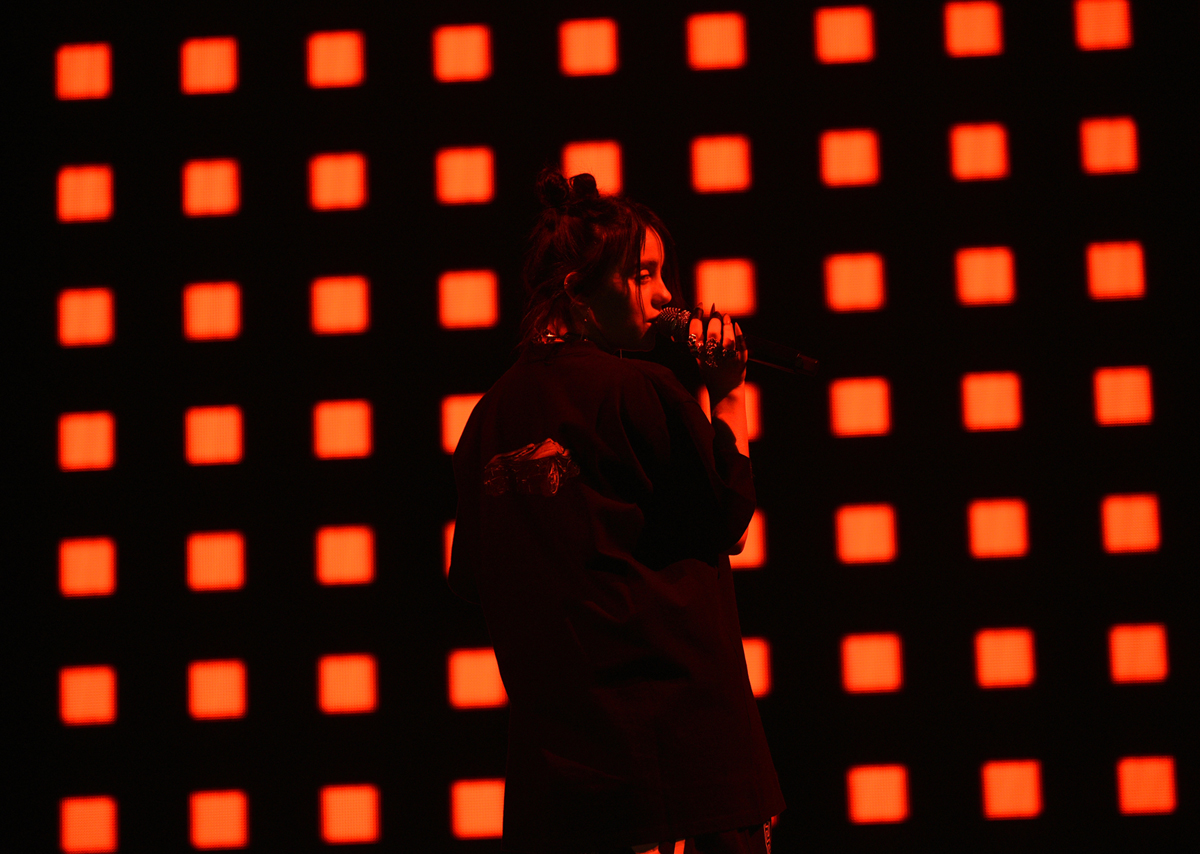 Qualms, if any, relate to Eilish’s haunting vocals hurting her presence. Though soft and spacey, they tend to take the backseat from time to time, with the instrumentals and background visuals each attracting more attention than they deserved.

The singer clearly took note of Drake’s recent floating car tour antics and turned her head to the cool side of the pillow. The show concludes with Eilish hopping on a floating bed for “Bury a Friend” some 25 feet in the air. Much like “Bad Guy”, this hit is just as hard to hear through the intense rumbles of 10,000 teens.

There is something special about Billie Eilish playing to a room of fellow teenagers. As much as she is an inspiration to many of them, she is also one of them herself. Only a couple of years into her professional career, Eilish does pop music on her own terms. It is without question that her next trek to the city will be even more monumental, likely the Bell Centre, or even headlining a certain Parc Jean-Drapeau festival. ■