They say it started with the dog.

When filmmaker John Chester and his wife Molly got their dog, it didn’t take long before they found out that L.A. wasn’t the dog’s first choice of abode. Stuck in their small apartment while its humans were at work, the dog would bark incessantly — the subsequent threat of eviction is what pushed the Chesters to entertain their wildest dream.

John, a filmmaker and cinematographer with many credits in wildlife-oriented projects, and Molly, a private chef, had always dreamt of living on a farm where they would grow everything and where the natural cycle of life would be enough to sustain their crops. (In other words, all crops — as well as the animals on the farm — help each other grow.) In an area of California dominated by enormous corporate monoculture farms, they found a small (in comparison, to be clear) plot of land and raised enough funds through private investors to embark on their dream.

The Biggest Little Farm chronicles nearly 10 years of that journey, from the farm’s inauspicious beginnings through its many struggles (with the weather, with wild animals, with the increasingly large brush fires that threaten California yearly) and successes to the present day. The Biggest Little Farm does a comprehensive job of taking us through what it takes to build a diverse farm on depleted land, so when I was given the opportunity to speak with Chester, I was less interested in the ins-and-outs of running such a farm than what it looks like to shoot a movie while also undertaking your life’s biggest project.

“There wasn’t actually an idea for a film until year five,” says Chester. “I’d done documentaries my whole life. I had my camera, and I was always making sort of short stories about the farm. Eight years is a long time, so if I shot even as little as five minutes a day spread out over eight years — that adds up! I would shoot things if I saw them as having potential value or importance, but I never understood how it would all connect together. I never saw the full film as something I could make, because it was this story about my wife and I floundering around with this very dreamy idea of what it could be. As much as I wanted it to be real, I didn’t know if it would be.

“By year five, I saw the return of so much diversity that was purposeful — and was now solving problems that we feared would end our existence in years prior — that I realized at that point that this is what we were trying to get to. And I realized, looking back at the footage, that I had documented a lot of moments with wildlife or insects that had purpose in our story. I spent the next three years being more serious about it and getting some money to bring in some professional help to finish up the film. But it wasn’t a lot of people — we basically just had two people working on the film! (laughs)” 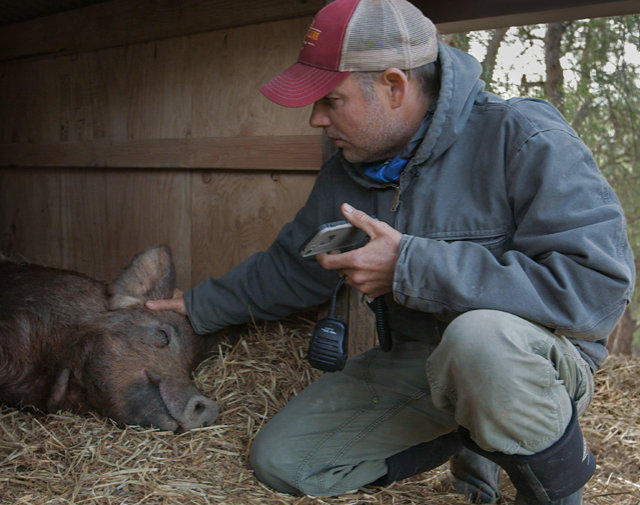 Spread throughout the film is footage that can be best described as Planet Earth-adjacent: extremely close-up, extremely crisp HD footage of animals, plants and insects going about their business. In that type of documentary filmmaking, patience is key; in other words, it’s not exactly the type of thing you have time to wait around for if you’re running a farm.

“I’d have interns do some of that stuff, where I knew that something would eventually happen,” he explains. “For instance, shooting the honey dew. I was looking for that shot of honey dew coming from the backside of an aphid for years! During the season where the aphids hit, for a couple of months, every few days, we’d be out there for hours in the morning trying to get the shot. If we didn’t get it, I couldn’t tell the story, so… ‘I’ll get it next year!’ (laughs) I couldn’t do this story half-assed. In order to show people the magic of it, we have to show what we stumble upon every day. Holding a camera still to stumble upon something as small as that is possible.”

Another hurdle of a movie like The Biggest Little Farm is somewhat more existential: it’s about Chester telling the story of his own life, and yet it must eventually finish. This is a fairly common trope in this type of personal documentary filmmaking: short of actually dying, how do you bring your own story to a satisfying close?

“There’s two endings that can happen, two ways to look at an ending,” he explains. “For this film, I found a moment in time that answered a lot of questions and yet allowed enough uncertainty to be part of the story’s end. That’s an acceptance that probably only goes so far — and impermanence is imminent. There’s a second way that a filmmaker can get to the end: give up. Eventually, you have to give up! The story is truly really never over if your subjects are still alive. I’ve found that some of the most profound things that have happened in the lives of my films’ subjects happened a year or two after I was done the film. People are like, ‘Wow, it’s crazy what happens to that guy in the movie!’ and I’m like, ‘Yeah, but do you know what happened to him last week?!’ (laughs) It’s really hard. Giving up is a part of it.”

Towards the end of the film, John and Molly’s son is born; he, like nearly everything and everyone born in the course of the film, becomes part of the narrative. At this point, however, one thing was clear to me: John and Molly Chester are extremely busy people, and this idea of “going back to the land” that’s sold to us as a peaceful and tranquil alternative to bustling city life is… well… a fantasy.

“It’s just so much stuff,” says Chester. “We got an incredible couples’ therapist out of the deal. I also grew up in a chaotic environment as a kid, and my mode of operation became self-reliance and numbness. In the middle of chaos, that’s not healthy for everyone else around you — but it does give me a little bit more bandwidth to deal with unhealthy chaos. I think that’s probably how the film got made, but I know for damn sure that’s not how I’m gonna live the rest of my life! (laughs) Doesn’t work! Not anymore.” ■

The Biggest Little Farm opens in theatres on Friday, May 24. Watch the trailer here: