Does Montreal play itself? Weirdly enough, Ivana Trump spent a part of her life living in Montreal with her first husband, a skier she married soon after defecting. That entire part of her life is excised from For Love Alone, which is set mainly in Germany, Aspen and New York.

Most egregious local landmarks: Though the film was ostensibly shot entirely in Montreal (or, rather, I have no information claiming otherwise), what that actually means is that the majority of this movie is set either on ski slopes or inside luxury hotel suites that are more likely in Tremblant than anywhere near here. In fact, it would not surprise me that director Michael Lindsay-Hogg is an avid skier — it would explain why a filmmaker best known for close, decade-spanning relationships with the Beatles and the Rolling Stones would opt to adapt a Danielle Steel castoff from Ivana Trump. In any case, there are a few exteriors shot in the Old Port, and one scene where the mountain stands in for Central Park. The outside of City Hall also appears as some kind of gala location.

Notable local talent: CBS Movie-of-the-Week productions like this one tend to come in with two or three stars at most and fill the rest of the cast with local hires, which means there are lots of local actors underserved by the material here. The biggest role goes to Brigitte Paquette as Natalie, the protagonist’s Jezebel BFF, followed by Paul Hopkins as her adult son. Prolific Montreal actor Tom Rack plays the skeezy film director who gets her pregnant in the early going, Bernard Ranger plays the private eye she hires to find the son (his entire role consists of sitting behind a desk and literally phoning in “we have no news” every 10 minutes), Vlasta Vrana plays a doctor and Denis Mercier (known to me and everyone my age as Tourbillon from the second run of Passe-Partout) as a gossipy socialite who is, in the protagonist’s words “very sexy, yes?” 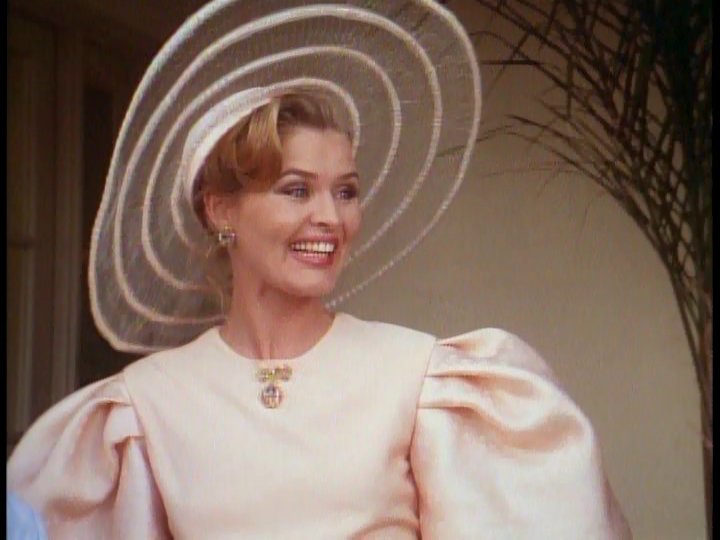 I know that there are very obvious suspects that I have not yet covered in Made in MTL: Snake Eyes, The Sum of All Fears, The Day After Tomorrow… but, once in a while, I really want to reach all the way down the barrel and pull out something sticky and foul that we never knew we put in the barrel in the first place. It’s these kinds of adventures that clued me in to the existence of Ivana Trump’s For Love Alone, a 1996 TV movie based on a book by Trump’s ex-wife/the mother of his large adult sons.

I have to admit that I am not particularly well-read on the Trump literary canon, and it seemed to me For Love Alone was more or less a straight biography. That’s not the case: For Love Alone is a heavily fictionalized airport-novel version of the Trump idyll, and it frankly has very little insight to give 2019 audiences. Add to that the fact that the Trump surrogate is played by Stephen Collins — the disgraced actor probably best known as the pastor dad on Seventh Heaven, whose career came to an end a few years ago when he was accused of pedophilia — and you have a double-cursed item of objectively very little interest.

Katrinka Kovar (Sanna Vraa) is a Czech competitive skier and model who dreams of a better life for herself than whatever miserable Eastern Bloc existence she may have had with her caricatural parents in the past. She falls in love with much-older filmmaker Mirek Bartosz (Tom Rack), who knocks her up and immediately dumps her, fearing that the scandal will ruin his career. After much deliberation, Katrinka decides to give the child up for adoption and defect to Germany — which she does by literally skiing across the German border mid-competition. (If you’re wondering why the hell she would enter a skiing competition while pregnant, this answer is: this movie plays it so fast and loose with the whole concept of linear time in the beginning that I may have missed something.) A few years later, she meets mayonnaise-ass billionaire yacht builder (?) Adam Graham (Collins) on the slopes of Kitzbuhel, and it’s love at first sight.

Or at least it plays in the tropes of love at first sight: though For Love Alone ostensibly represents one of those “the dark side of the fairytale” moral fables, it spends absolutely no time showcasing the fairytale part of it. Katrinka falls for Adam mostly because he’s rich and has a pulse and, unlike everything else in her life, does not outwardly project an aura of misery and tragedy. (Both her parents die in a car crash soon after she defects — which, for the record, did not happen to the OG Ivana.) They have a very brief dalliance before Graham yells a wedding proposal at his boo while on the high seas, but it barely even feels like a romance at all. The most romantic thing the guy does in the entire movie is insist that Katrinka cancel plans to hang out with him instead. 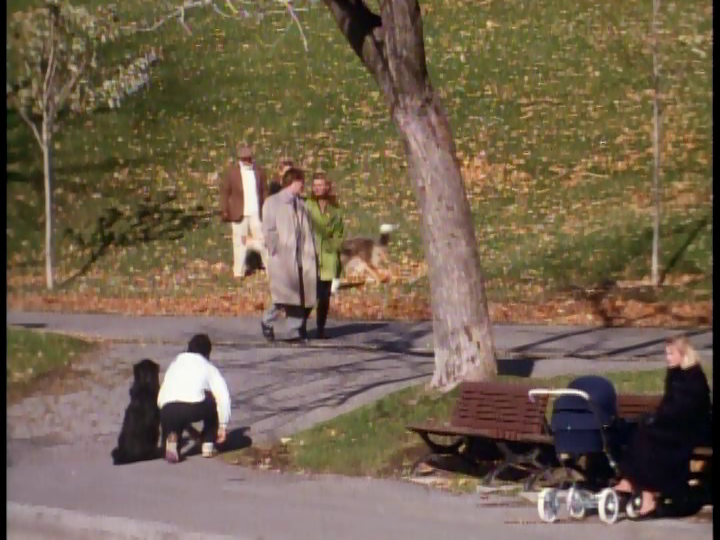 Mount Royal as Central Park in For Love Alone

But Adam Graham (which most people mash into one word that sounds like “anagram”) almost immediately turns out to be a pissy little whiner who can’t be challenged on anything; he puts Katrinka in charge of running an old hotel he takes over and has a shitfit when it turns out she’s good at it and people enjoy it. (This did, I think, happen to the OG.) To 2019 audiences, of course, this makes sense: we need no further confirmation that the President is a thin-skinned weasel who’ll draw cave paintings with his own poop whenever the opportunity arises. But in the context of this would-be romantic TV movie about a guy who was, at the time, just a kind of persistent but toothless celebrity rich guy, it’s truly perplexing. The conflict arc in For Love Alone is essentially just a triangle — things start getting worse the second they get better.

The film is particularly ridiculous in its early going, when the production tries very hard to work around the fact that they don’t have the budget nor the accents to properly pull off Czechoslovakia in the late ’60s, but it hits a plateau fairly early on and then becomes an extremely boring meat-and-potatoes soap opera drama wherein Katrinka persistently attempts to reconnect with her estranged son, develops a friendship with another rich socialite (Brigitte Paquette) only to see said friend cuckold her after she helps her get out of an abusive marriage to a Saudi billionaire (Cas Anvar), rekindles with the only faithful man she’s ever met (Trevor Eve) after his entire family perishes in a fire (!) and engages in various feeble battles of wits with a gossip columnist based on Liz Smith and played, for some reason, by Madeline Kahn. (The reason is that she was also on New York News, the short-lived CBS sitcom starring Mary Tyler Moore, at the same time.) 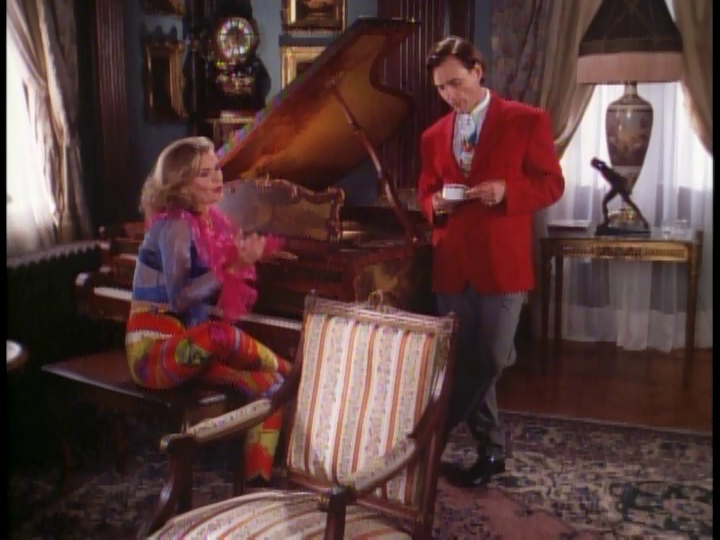 Indifferently directed and even more indifferently performed (the real Ivana shows up at one point to give directions to the fake one, giving the film a totally superfluous hit of metatextual fuckery that would do Stan Lee proud), Ivana Trump’s For Love Alone is less some kind of fucked-up Rosetta Stone for the events that followed and more a stultifying time capsule of a period when it seems audiences were only accepting of drama if it happened to super rich people in bedrooms and boardrooms.

It’s mildly funny to see that idealized, romanticized version of Ivana never has children with Adam Graham and instead pines for the child she gave up for adoption way before she ever met him; imagine being one of the Golden Retriever Trump sons and finding out that, while your mom wrote a book about her life, you’re not in it but some made-up kid is? That might be the only piece of the puzzle worth uncovering in what is otherwise below-standard, assembly-line tripe. I wanted For Love Alone to be camp, I think, because it was the only way I could really justify spending 93 minutes of my 2019 time watching this movie. It was a fool’s errand — how could it be any worse than the real thing? ■