The amber-coloured lights of Athens shine on the neighbourhood of Exarcheia, a community long inhabited by anarchists, philosophers and artists in the Greek capital. In Exarcheia, le chant des oiseaux we are guided through these streets at night. Sometimes, we follow Dimitri, a kind of modern flaneur, but we also encounter young dancers, old thinkers and theatrical players.

Nadine Gomez has crafted a documentary that fits into the long tradition of city symphony films. She might digress with her fascinations and be caught by the cycles of the modern world, but there is a strong kinship with the impressionistic silent classics like Ruttman’s Berlin: Symphony of a Great City and Vertov’s The Man With a Movie Camera. The soundtrack bounces with a primal musical score and the films are filled with conversations about politics, life and dignity. Gomez’s fascination with the sounds, forms and atmosphere of urban environments connects her work to the observational poetry of those early constructivist films. Her previous films similarly explore a variety of urban spaces and she’s made documentaries exploring the last days of the Old Montreal Horse Palace and the Montreal Metro System. Her treatment of Exarcheia is more than a portrait of concrete and architecture, it unveils how space can be a reflection of its inhabitant’s soul.

As a backdrop to the film’s more universal inquiries is the specifics of the Greek condition. The question of the devastating financial crisis and the more recent wave of migrants arriving from the Mediterranean inform and disrupt the conversations. The various discussions are constantly unsettled and uprooted; they are not searching for a definite answer as much as searching for spiritual meaning. History hangs overhead but is referenced unexpectedly. The subjects don’t seem to dwell on the past, as much they want to move forward.

Sitting down to talk with Nadine Gomez about her film Exarcheia, le chant des oiseaux, we discussed urban environments, modern life and the nature of reality itself.

Justine Smith: What is your relationship with Greece and the neighbourhood of Exarcheia?

Nadine Gomez: I grew up in the Mile End, so my first encounter with the Greek community was because I was working at le Petit Milos. A good friend of mine was Greek too and she taught me a lot. A few years later, I went to Greece with a friend who had a play in Athens. I discovered the real Greece, which is very different from the community here in Montreal.

I found something very comforting in it and I felt at home. I’m half-Mexican and it felt like a Latin country. People have this lively energy; they’re very intense and dramatic. The translator of the play was living in Exarcheia. She was a bit like Jeanne Moreau. She was always smoking cigarettes and her house was filled with books. She showed us the neighbourhood. At that time I had just finished a film. I’m interested in urban spaces and so, when I saw the neighbourhood, I was fascinated.

JS: All your films deal with cities. What fascinates you about urban environments?

NG: When I finished my Master’s degree, my director gave me a text about public squares in Europe. These spaces are very important for your political life because you come face to face with others. Sometimes you’d have public speeches, things like that. The square represents what it means to have a political life in a physical sense. I like the idea of having abstract concepts materializing in space. It is always a struggle to find a good form for what the space offers.

I thought, “cities are what we project onto them.” We organize cities by conceptualizing what it means to be a human being. How should we live? Now, it is all based on efficiency, but in other times it was beauty or something else. The way a city is organized says a lot about the society and the time.

When I look at one space, it gives me the opportunity to analyze an aspect of it. How humans affect space and how space affects humans. For example, many years ago I went to Moscow and I felt so small. I realized the Stalinist architecture is made to make you feel small. It is the structure that oppresses you. On the other hand, neighbourhoods like Mile End, everything is very low to the ground. There is a human scale. 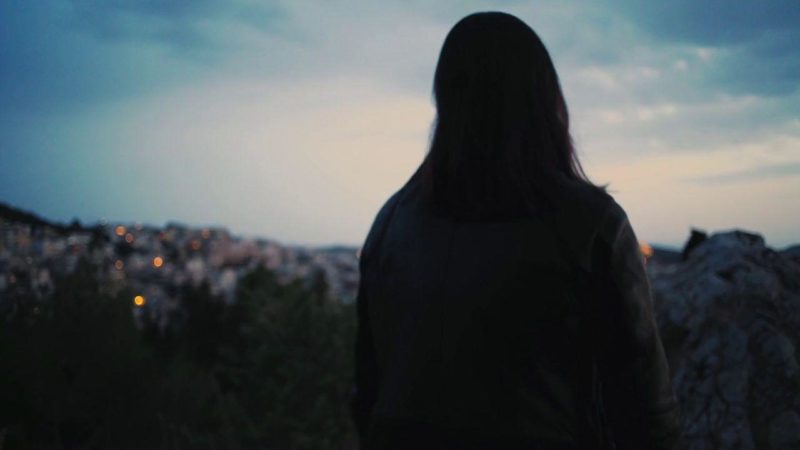 JS: One of the subjects in the film talks about dignity. He says that dignity is not about your ability to pay your bills, it is about helping others as much as you can. It made me think about what we value in our lives and society.

NG: What I find attractive about the leftovers of Europe, even not in its best shape now, is that they still carry around this philosophical question about what is a human being. They carry this humanist vision of existence. In North America, we are very focused on productivity. I felt guilty in the beginning because I wasn’t shooting enough. They don’t feel that way, they would tell me, “you North Americans are ridiculous.” We focus on paying our bills just so we can buy more. Montreal is a space where we still have some of that, we protect our cultural life. It’s still important but over there, it is still institutionalized.

Greek people have a culture of spending time together, drinking, talking and having coffee. It’s like that everywhere. They defend this too; it is very precious to them. Even during the crisis, they’d go out to have coffee.

JS: Most of the film takes place at night. Did that happen organically?

NG: Political life is something that you fantasize and you know when you fantasize? At night. The night carries all these ideas. It is difficult to shoot Exarcheia at night because there are a lot of young people and anarchists who do not want to be filmed, but following someone around is easier. You have an excuse and you can shoot the space around the person.

I was looking for a kind of character of an old man, a kind of oracle, to bring mythology inside the film. A friend of mine just said, “Dimitri.” I met Dimitri and he asked for a whiskey and we went off! I wanted more people like him, but my friend says, “no, there is only one Dimitri.” Other people will give you other different things, but no one else was able to be a pillar like him. I was also inspired a bit by the Russian Ark and the movement of the film. Dimitri was this man who brings you inside and you follow him through the story.

JS: How structured are the conversations in the film?

NG: With Dimitri, I was filming and my friend was there too, he was holding the sound equipment. The first night, we were attacked by some anarchist hooligans. They hit him and the camera. We were all a bit shocked so we went to the bar and decided not to film that night. Then Dimitri accepted we try again but take a different path. With him, he’d just find things. With the others, it was a bit more directed. I told them what I was trying to say with the film, I brought up subjects knowing their backgrounds. It’s organizing reality. Reality gives you stuff, but you just have to give it a bit of structure.

JS: What did you study in school?

NG: I took cinema classes at UQAM while I was doing my Bachelor’s in journalism. I hated journalism. When I finished my Bachelor’s, I did a Master’s in communications and that is where I got a hold of my ideas more. I learned to structure my thinking and that’s where I discovered that text about urban spaces.

JS: What was it about journalism you didn’t like?

NG: I think it was the way we were taught. I came in with a very romantic idea about journalism; being able to really dig into a subject and transfer that knowledge to another person… but the bachelor’s degree was so technical. We learned how to make a good title. It was very frustrating and we didn’t even write! Nothing more than five pages.

You should have a global background in human sciences and then, maybe, four or five journalism classes. It seemed like they were just building journalists just to transfer information. It was too technical. I mean, of course, there’s good journalism. I love The Daily [the New York Times podcast], for example. That’s where documentary came in, the time you can take and the freedom you have to really dig into a subject and not being forced to reduce reality to something very narrow.

JS: What projects are you working on now?

NG: An adaptation of a book. It’s the story of a little girl in South America told in fragments and it’s very poetic. It’s Lula Carballo’s Créatures du hasard. She wrote it in French and she’s from Uruguay. My dad is Mexican and I realized it was a good story for me to dig into this aspect of myself. I think it will have a documentary feel. The other one, we got some money from SODEC. It’s hard to say, it’s like a Fresco about urban life in a more global and abstract way. Not about one city, but city life, using different cities to create a kind of invented city using narratives from different writers. ■