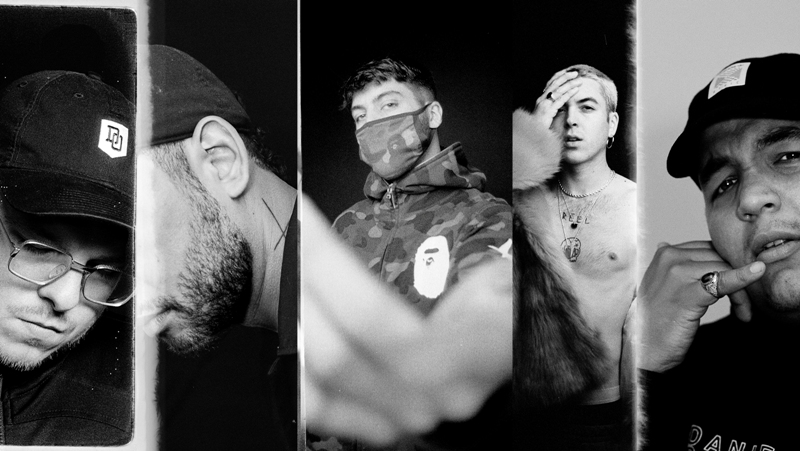 Dead Obies know what you’re thinking. And they believe their third album, DEAD, answers those questions.

Can Quebec’s biggest rap group this decade survive the loss of founding member Yes Mccan? Can they reclaim the Quebec rap throne from the Louds, Foukis and Alaclairs of the world? How can they even follow up a couple of full-size CD-length epics in Montreal Sud and Gesamtkunstwerk?

DEAD doesn’t sidestep the issues, and how could it, at a concise 11 songs and 40 minutes that make their first two records look like trips to the all-you-can-eat-buffet? By the end of the record, which perhaps tellingly closes with a couple of lighter tracks, you’ll know where they stand on Mccan’s departure — and in all likelihood you will, too.

It’s also clear in listening that the tight-knit quintet — Snail Kid, 20SOME, VNCE CARTER, Ogee Rodman and Joe Rocca — had no interest in recapturing past glories on their third long-player, which comes two years after their last one. The band that rises on DEAD is direct in its messaging, with each member lucky to get even eight bars on a verse instead of the customary 16. Down a member with a burgeoning acting career that forced his departure, the remaining Obies tossed their egos aside and asked themselves what it means to truly be dead.

“It was a less-is-more feeling, instead of all of us on a song pis toutes faire des long verses,” says Rodman in the group’s customary bilingual repartee. “When it came time to select the songs, it was easy to narrow it down to what fit.”

The group’s newfound brevity is also the result of increased confidence at the mic, says 20SOME.

“I think the other records, we were reacting to what was happening while we were doing them. We didn’t have a chance to take a step back and see the big picture. We didn’t have the confidence to let every song stand on its own, so we felt like everything on the record from A to Z had to make perfect sense. In the end, for us it would make sense, but for the listener, they might not have been aware of all the small details. For this album, listeners can just focus on what’s important.

“We’re at a point where we don’t have to prove ourselves or justify every move we make. We’re rappers, we know what we’re doing, and if we want to say something on a track, we don’t always have to provide context. We know we’ve got two albums that back up what we say.”

DEAD is as much a reflection of what was going on internally — the pals regrouping after a gut-check moment — as what was happening in rap in general. If DEAD feels light compared to overstuffed offerings by Migos and Drake, consider that it’s more in line with a 90-second hit by Lil Pump where everything is in its right place.

Minus obscure references to parse through, the group thinks the musicality of songs can shine. Beat architect VNCE kept his four MCs on their toes, so if a couplet sounds astonishingly un-Obieslike, it’s intentional.

“We did over 60 songs,” 20SOME says. “We picked the 11 that are the most honest and direct, because it’s what we wanted to do with the album. There are great songs that didn’t make the record, but they won’t go to waste, we’ll save them for later.”

So what did make the cut? You’ve got Yeezy dissonance on “Andre,” a chill party cut in “Doo Wop,” classic Obies vibes on “Runaway,” and Nelly and Kelly relationship rap on “2together.” You’ve also got “Royautés,” which comes across as much as a call to arms for us as it is a rallying moment for them. It reaffirms their relationship to each other after Mccan decided to leave the family.

Mccan leaving last year could’ve torn the band apart, but with advance warning, they were able to go on offence, dropping new music and photos as a happy five-some.

“We went back to the basics. Est-ce que c’est fini? Non, c’est pas fini,” says 20SOME. “Then what is Dead Obies? For us, it’s something bigger than each us of individually, and we’re all conscious of that now. If you lose a verse on a track, you don’t personally lose, everyone wins because the song is better for it. We’re all working towards something bigger. That was re-instilled in all of us. It was a big wake-up call.

“The first reflex we had (after Yes left) was to make music. The theme of the album wasn’t showing up, and then (Yes) left and we got our laser focus. Everything became clear to us. VNCE said, ‘What about an album called Dead? Let’s talk about that on the record.’

“Our work ethic became impeccable. A sense of urgency kinda came over us, because we got to see what the band would be like if it were dead and we realized it was worth fighting for. We’d be on the streets without a job. The adrenaline kicked in.”

It also would’ve been a shame for the Obies to break up and no longer benefit from a rising rap tide in the province that they helped cultivate. It’s Loud who’s getting that coveted first Bell Centre gig and getting the accolades, so while previous albums were a proving ground to rap sceptics in general, DEAD is aimed at their own friends and colleagues who took their own major strides while the Obies were away.

“We’ve been building this project for years now, and the game has changed so much. It wasn’t the same when we started. We had no rap groups signed to labels like Bonsound. Why quit right now after we’ve built all this together?” Rocca asks.

“We’ve been doing it awhile,” says Rodman. “We’ve been away, and Loud and Fouki have had their success, but there can only be one first place.”