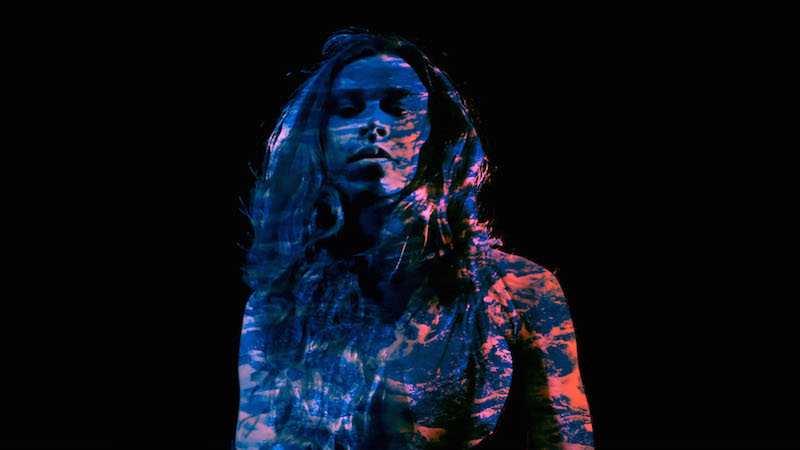 A conversation with interdisciplinary artist Mich Cota about her upcoming performance, Wàsakozi, coming into her own as a dancer and what any of this has to do with squeezing into an overflowing metro car.

MC: Good, good. Working on some subtitles for the show.

NR: Welcome back from your tour.

MC: Thank you. It was good. The shows were great. I’m happy that I did it.

NR: How’s it been rehearsing for your opera, Wàsakozi, since coming home?

MC: It’s been good. There have been maybe five rehearsals total. And everyone is so on board to make something big happen in such a short amount of time. It’s going really well so far.

NR: Could you tell me a little bit about the show or about the inspiration for the show?

MC: The opera is called Wàsakozi and that means lustre in Algonquin, like a reflection of light. It tells the story of this character named Odjìshìngwe who is born from darkness and light and has to navigate their way throughout the world on their own. They meet this character named the Wisakedjak who is a mythological character, an Algonquin demigod who is a trickster spirit and pretty mischievous, but also older stories about the Wisakedjak talk about the creation of the earth and the way that they tricked the sun to rise and the moon to set. But in this story the Wisakedjak acts as a protector and a friend to the protagonist Odjìshìngwe.

NR: Are you the protagonist?

NR: What’s it like embodying this character? Is it somebody you strongly identify with?

MC: It’s pretty much me. It’s kind of an autobiography but told in a very fantasy kind of way. It feels good and mainly the whole purpose of the opera is to show this character’s understanding of what it means to be a two-spirit person, which is interesting on either side of the gender spectrum.

NR: Do you feel as though dance help you to access that — to access something that’s not so evident verbally? That’s so embodied?

MC: Well I think dance has become a way to free myself from having to show any kind of masculine or feminine side. When I’m dancing for myself in this production I have so many choices to move or express myself however I see fit, whether it be showing sides of masculinity or femininity or just feelings that I think aren’t tied to gender but a lot of people I think see overly emotional things as feminine, and you know, strong, guarded, protective attitudes or overly confident attitudes as masculine and I kind of want to blend that together. And so dancing has given me that opportunity to do so.

NR: When I saw the ad for Wàsakozi I started thinking about seeing you a couple years’ back at La Vitrola performing in that red dress as it was cut off of you and at the time I remember thinking of that as a dance but then I saw you perform at Pop Montreal this past fall and it seemed like that dance impulse had really grown into something much larger, so I was wondering if there was a first moment for you when you said, “I am a dancer.”

MC: (Laughs) The first moment was when I released Kijà and I was dancing on my own with a backing band behind me and I kind of gave in to free movement because I didn’t have anything in my hands so I started expressing myself that way. And moving through the stage and the space especially that connects the audience to myself is very important now and I guess that’s when I noticed that I was dancing in order to make a connection, and that the element of dance was just as powerful as singing and the music that was combining [to make] my performance. So that happened I guess just over – close to two years ago, maybe a year and a half ago?

MC: I danced in pow wows a lot. That was kind of my first exposure to it. On my dad’s side of the family we’re indigenous and community gatherings with people singing at the drum was a powerful experience for me. Staying in time with the drum at the centre as the heartbeat of the community was something that was so powerful for me and also seeing people in their regalia and the deer skin, tassels swinging around — it felt like we were all moving to grow up together and build this new memory that would make us stronger. I ignored that part of myself for a while. Not necessarily intentionally, but I was more busy with making music and trying to crack the code to what a good performance is and what good music is, and how to properly connect with people, and [figuring out] actually what am I trying to express, like what is my message?

I don’t think there has to be a narrative, exactly, when it comes to performance. Sometimes people just need to come into a space where they can be allowed to feel whatever they need to, interpret things as they need to, but in this phase of my life where I’m still figuring out where I fit in terms of gender I think it’s really special for me to go back to the time when I started dancing in pow wows as a young kid and be mindful of ways of being in Algonquin culture that embraces trans people and two-spirit people.

NR: As an adult, are you able to dance in pow wows now?

MC: I am. I haven’t done it in a long time but I’m totally invited to. It’s just living in Montreal and being busy with what I’m doing hasn’t given me the opportunity to do that kind of thing unfortunately. I’d love to again, and I know I will.

NR: This is almost a funny question, but do you ever go to dance classes?

NR: Have you ever?

MC: No I’ve never gone to a dance class but I’m inspired by the thought of doing it. (Laughs) I like moving assuming that I know what I’m doing. And I think that confidence comes naturally for me and nothing feels forced. I don’t feel like I’m pretending or faking anything necessarily because I’m showing who I am and the movement that I’m giving out is something I would like to do anytime. It doesn’t have to be on the stage. I could do it, like, walking down the street.

NR: As an ex-dancer I feel like even people who are training all the time can have this imposter syndrome, you know? Do you feel that there’s this established old guard of dance that bristles at the thought of dancers who aren’t formally trained taking the stage? How supportive or otherwise do you feel the dance community has been towards you?

MC: The dance community, or what little of it I’ve been exposed to, has been very warm — in Montreal specifically. When I was in Paris dancing I did witness some of the old mentality I guess. People who have been there forever and took movement seriously and very critically so that it kind of felt suffocating to do, you know, whatever. But, I respect that. I do. And I think that dance is a craft and something that you can choose to study intensively with others and that can also open up a lot of creativity and freedom but I haven’t had that [background]. That’s not my story.

And if I’m to meet criticism saying that I’m not a dancer I won’t disagree with them necessarily. I’ve made the choice to perform: moving my body and showing my body. I have the means to show what it is to be a two-spirit woman in the body that I have now. And that is my point right now and that will change I’m sure in the future.

NR: I grew up dancing well before I came of age sexually but still catch myself pointing my toes during sex, and sometimes I wonder what it would be like to discover dance as an adult, how that would impact how you see your body and the relationships you have with other bodies, whether that’s squeezing into a metro car even or something more intimate. Would you want to comment on that?

MC: Well, for myself I think it’s kind of this naiveté that’s exciting for me. Where I can squeeze into a metro car and feel the little microcosm and want to, I don’t know, make a dance right there — which could be standing still or trying to get to the other side of the car. It is a beautiful experience to walk through my day. I think I view myself sometimes from the outside and not necessarily from my inner perspective so I like looking at the bigger picture and seeing tableaus and perhaps those who enter dance at a later point in their life can begin to see things from a different perspective, not just from themselves but as this stage that they’re standing in. Does that make sense?

NR: Yeah, I think so. Do you know other artists who have also discovered dance late or as this synchronous process with music who you see as sources of inspiration or as collaborators?

MC: The people I’ve been collaborating with have been in dance for a while. So not really, no. That’s the thing. This is so new to me and I’m very open to learning and meeting new people but those who I’ve met have approached me and wanted to be friends or collaborate and have been doing this like all their lives and I think that’s incredible and it’s also an honour for them to want to include me. I haven’t really done my research or sought out others who’ve started dance later in life.

NR: I mean I think it’s inspiring to seek out this art form which can seem so closed and so part of a conservatory mentality. That’s very interesting.

MC: Even for music I never wanted to study it necessarily. It was just something that came naturally and something that I really liked to do. And dancing is something that I’ve always admired and found to be very special and transformative. So, I’m happy to be doing it. ■

This interview has been lightly edited and condensed for clarity. Mich Cota will be performing Wàsakozi Jan 24–26 at the MAI (3680 Jeanne-Mance). For more information, go here.