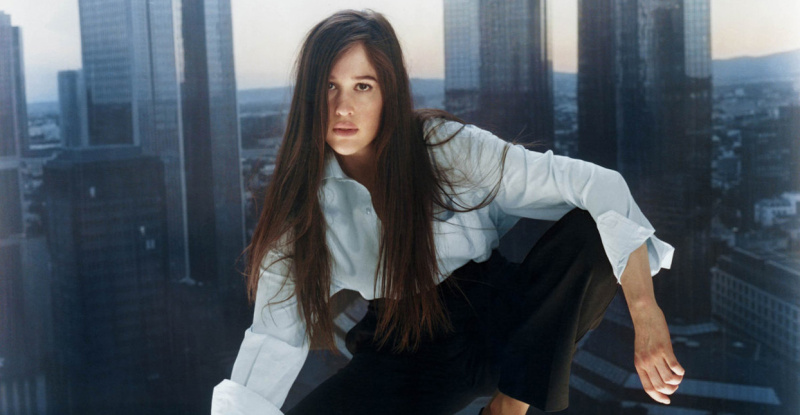 Working Class Woman is Marie Davidson’s fourth solo album, her debut on Ninja Tune. Like its predecessor Adieux au Dancefloor, it’s a vivid splash of beats, synths and vocals more spoken than sung. More than ever, the Montreal producer/composer is digging into dance culture both musically and lyrically, contemplating what work has done for her and to her over the years.

Therapy and Jungian psychoanalysis prompted Davidson to address her obsessive tendencies on the record, particularly on the track “Workaholic Paranoid Bitch.” Though she says that she used hard drugs weekly for years, and that she considers this addictive behaviour (behaviour that isn’t part of her life anymore), it’s travel and getting involved in too many projects that affected her quality of life.

“As much as my work has helped me become who I am and become more confident and fulfilled as an artist, through the years it became toxic,” says Davidson. “I had a hard time saying no to gigs and projects and at one point I realized I was burnt, and my health started to disintegrate. I’m learning how to deal with this better. Doing the album was part of it for sure. I’ve been slowly making changes, and it’s getting better, but it’s hard for me.”

Despite her workaholism, Davidson doesn’t suffer from Brian Wilson syndrome, ie. addiction to the studio and perfecting tracks to death. “My studio work is the part of my job that is the healthiest and the most fun,” she says. “I’m a perfectionist but I’m not obsessed. When I’m working on a track, I’m more connected to my gut feeling, and when it starts to feel how I want it to be I usually know how to stop, take a break and come back to it later. I like the rawness — my music is produced, it’s sophisticated, but it’s not the most sharp or refined sound. What’s most interesting about my music is the composition and the feeling, the emotions.”

An instrumental version of Working Class Woman was released by Ninja Tune a month after the original, and though some critics have said otherwise (in their overwhelmingly positive reviews), Davidson credits the existence of this LP to the fact that the label wanted to do it rather than to the increased danceability of her sound, or an artistic need for a vocal-free version.

“The tracks that have no vocals (on the original record), there’s a reason why they have no vocals, and the tracks that have vocals, there’s a reason why the vocals are there. It’s all music to me — vocals are as musical as a kick drum or a bass line. I like to consider it that way: I work with sounds and the sound of my voice is part of my bank of sounds.

“DJs often ask for instrumental tracks so I’m glad that they’re out there and people can use them as they want,” she adds. “I strongly believe that once the music is out, it doesn’t belong to the musician anymore. I did it and now it’s gonna have a life of its own and that’s great. It leaves me head space and body space to just move on to other things.”

This winter, “other things” include some much-needed downtime for Davidson, two months of studio time (and r&r with her husband and cat) before she embarks on a tour of the U.S., Asia and Europe in the spring and summer. Local fans will get a chance to see her live on Feb. 1, however, a chance that they should not pass up.

“To feel it, you have to see it,” Davidson says of her show. “I’m not a DJ, I’m a musician, but this music does touch on dance culture. I just played a rave in Manchester with 4,000 people and they really got into it — they were raving. I do get on the mic and talk to people and sing, and in some parts of the set there’s no talking, it’s just live electronics. This is what I do.” ■