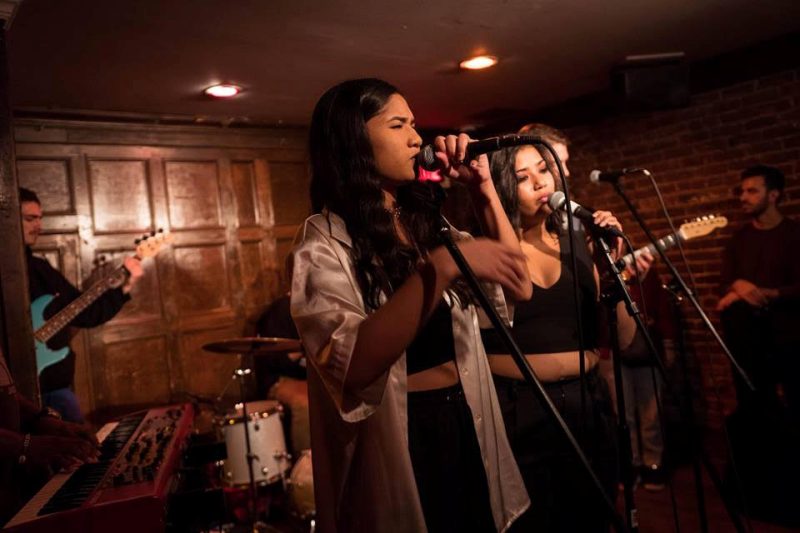 If there’s one thing rapper and visual artist Bea di Vinci has learned in the past 18 months, it’s that hip hop is a business — and it’s booming.

Since late 2016, 20-year-old Beatrice Dimaculangan, known under her Renaissance-inspired stage name, has been writing and performing in clubs and venues around Montreal, working to develop not only her sound, but something akin to a personal brand.

“I know so many people that make amazing art, amazing music, but [you need to] know how to market it correctly and package it in a way that’s consumable.”

Although she’s currently enrolled in part-time classes and pursuing a degree in International Development at McGill, hip hop is more than just a side gig for di Vinci.

Di Vinci is also a talented and prolific painter, specializing in portraits of other artists who inspire her. Everyone from Anderson Paak to Erykah Badu is pictured on her Instagram feed, often with accompanying video time lapses documenting the creation of the painting.

“I guess I just got into the niche of doing portraits of other artists, just cause… they’re people that inspire me! [I’m] just honouring them.”

Along with cultivating a burgeoning music career and managing as a part-time academic one, di Vinci is currently working to create an online venue where people can buy her portraits and commission new ones. Though the venture might seem far removed from her hip hop career, di Vinci insists that no creative process exists in isolation and that no one initiative takes precedence over another.

“I kind of just want to approach all these things more holistically, as [part of] an all-encompassing brand.”

Having worked with Montreal feminist collective Lotus and performed in Rap Battles for Social Justice in various venues around the city, di Vinci cites Montreal’s dynamic and supportive hip hop community as being a constant source of inspiration.

But for all her positive experiences, di Vinci admits that being a female artist in a male-dominated genre isn’t always easy.

“I’ve been fucking harassed at shows before […] by people who are supposed to be my colleagues, or other people who are in the scene, who I see and I perform alongside, and it’s not fucking cool. I’ve been underestimated because I’m a woman […] I feel like I have those interactions in this community all the time […] I think being a woman in hip hop is really challenging that though.”

Indeed, the subject matter of di Vinci’s work often leans toward the political. Juxtaposed with her deep, velvety voice, her lyrics become even more bracing. Though she doesn’t identify as an inherently partisan artist, di Vinci has always used art as a way of spreading messages she believes in and mobilizing her community.

The artist makes an effort to get involved with issues that fall outside the hip hop community, regularly participating in workshops advocating for Indigenous communities and recent immigrants as well as participating in protests and performing in charity events. Her next performance, which will take place this week at la Vitrola, will donate half the proceeds raised to the Montreal Children’s Hospital Foundation.

Di Vinci hopes to begin recording in the new year both her solo work and in collaboration with other artists. She plans to continue performing and working on her visual art, developing her skills and working toward her vision.

Bea di Vinci will be performing at la Vitrola as part of the 40:40 Concert for the Children alongside Double the Vision Entertainment collective on Saturday, Dec. 15.