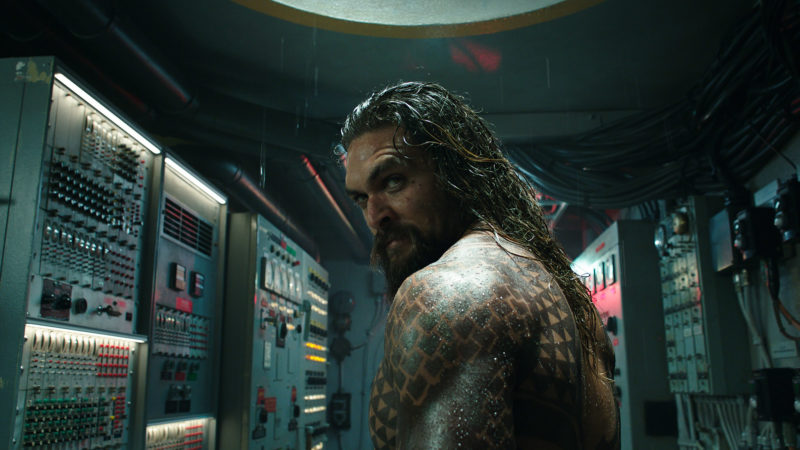 I think all nerds would somewhat agree with me when I say that there are three types of superhero film fans: Marvel maniacs, Marvel enthusiasts, and then the third and best kind, those who just want a trippy version of Blue Planet with a very wet Jason Momoa.

Enter Aquaman, a silly splash of a superhero movie directed by James Wan (Saw, The Conjuring). It tackles the origin story of the half-man, half-Atlantean, all muscular merman, Arthur Curry. Of course, taking up the role again after a whisky-smashing stint in the much-maligned Justice League is the Hawaiian half-god himself, mister Momoa, looking as impossibly smug and as perfectly gigantic as usual.

Here is probably where I should confess my giant bias towards my favourite Dothraki. I have spent more than a handful of minutes perusing his Instagram stories for audio-visual evidence that he can down Guinness like a champ, rock climb without a harness and wear as many skull-shaped rings as possible. Listen, someone’s gotta keep track. All this to say that I’m not mad at 140 minutes or so of Momoa swimming about, even when it includes him coming out of the water in slow-motion while an ocean-inspired cover of Toto’s Africa by Pitbull rips through your eardrums with lyrics like: “From ocean to ocean, sea to sea. I’m something that you gotta see.”

The film unfurls like most origin stories: special boy must become a hero, but doesn’t feel worthy until a pretty girl whispers in his ear that he is. Here, the special boy is Arthur, the water baby born from the frowned-upon union of a rebellious Atlantean queen named Atlanna (ethereal Nicole Kidman in a fish-like leotard) and a simple lighthouse keeper (Temuera Morrison). Once Atlanna dives back to her people, Arthur grows up with mommy issues, the skill to breathe underwater and a lot of geometric, full-body tattoos.

Arthur’s pulled into the water world when his half-brother Orm (Patrick Wilson) proclaims himself Ocean Master and declares war on land people to avenge all that garbage we’ve been throwing into the sea. Guys, stop using plastic, there are angry aqua people down there wearing golden wetsuits and riding around on sea horses. The daughter of King Nereus (Dolph Lundgren), Princess Mera (Amber Heard, dishing out serious red-headed Ariel vibes), begs Arthur to stop him by claiming his rightful spot as King of all the Oceans…or something.

If you can’t tell by the slippery-when-wet plot, this cruises the brooding DC Universe right into full-on goofy territory. During the opening sequence, guitar riffs accompany every hair flip and body slam, because when you’re a man like Momoa, every move is pure fucking metal, man. The soundtrack veers into a comic jingle-like ditty to indicate its sillier moments. Hey, watch out, we’re doing jokes now! This is especially noticeable during flirty banter scenes between Aquaman and Mera, like one where she’s mesmerized by the human world during a droll stroll in a Sicilian village. Do they think we haven’t seen The Little Mermaid?

Meanwhile, the underwater world is a lot of fun. I’m talking CGI maritime skyscrapers, colourful fish people, a war waged against a kingdom of angry crabs and an octopus playing the drums. The only downfall of this being that the actors, including Willem Dafoe who somehow got conned into riding an armored shark, have to spew out terribly stoic dialogue with a kind of weird, foggy underwater CGI sheen on their faces and special effects shaping their hair into a floating mass. Also, just saying, I’m no scientist, but supposedly you can light flares underwater. Hey, I believe you, movie.

You see nerds, DC can have a good time, too — it just needs to forget the real world and stick to Amazonian women islands or sink down to absurd sea kingdoms. I sense that Wan might have been trying to achieve the same kind of light-hearted romp that was Thor: Ragnarok, and if you count the amount of times I was laughing at the movie, then I guess he succeeded. Bias or not, I’m also not going to sacrifice any goats at the altar of Momoa’s acting chops, but I will give him an Oscar for those thighs and that laid-back but intimidatingly masculine surf-bro attitude. Dive in baby, this is the dumb-but-fun fiasco the doctor ordered to cap off a terrible year and escape it for a bit. ■