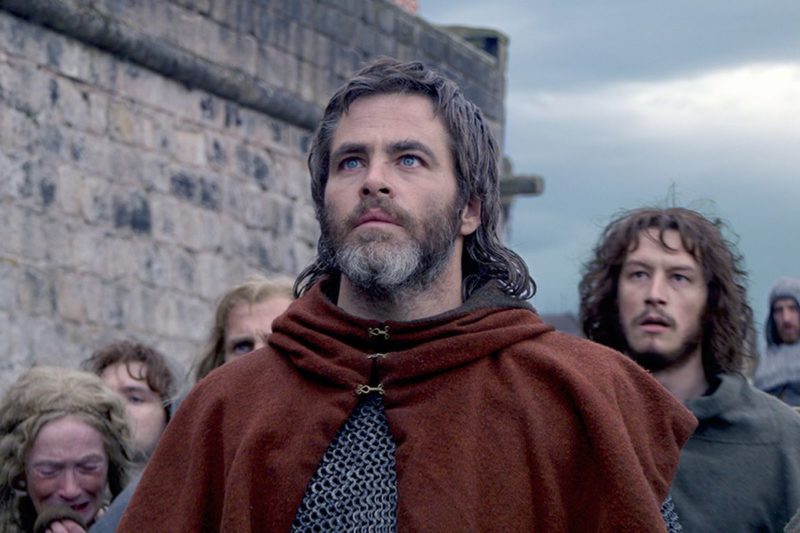 Hollywood has hit a critical mass of Chrises. It sounds like a joke — and it is — but there’s also something to the proliferation of handsome white men named Chris that we associate with billion-dollar franchises. They’re all pretty good at what they do, but it’s hard to argue that they’d more or less be interchangeable if we didn’t associate them with superheroes and other larger-than-life figures.

But I don’t think Chris Pine really has anything to do with the other Chrises.

It certainly applies to his early career. He rose to prominence as the jocky-but-tender love interest in romantic comedies starring Lindsay Lohan and Anne Hathaway, giving off the vibe of a football player who maybe reads once in a while. But ever since Pine landed his so-called iconic role of Captain Kirk, he seems to have actively skirted the conventional wisdom that he should be a conventionally handsome Hollywood lead. He aged rapidly and in an unexpected manner, taking on weathered-heartland qualities more befitting character actors like Sam Elliott and latter-day Jeff Bridges; he alternated roles in big studio movies with indies and oddities that, as it turns out, were in no way helped along by the presence of a so-called A-list star.

This particular quality — too handsome to be the guy that spends his career torturing Tom Cruise before being blown up in the third act, too strange to be the fun-loving doctor who brings Cameron Diaz out of her shell — is the main thing that the serviceable historical epic Outlaw King (stylized as Outlaw / King in the opening credits, in case you weren’t quite able to parse that dichotomy) has going for it. Outlaw King is one of those busy historical dramas that parades a seemingly endless amount of dishevelled, long-haired white guys who are rather hard to tell apart and dutifully goes through their history. It’s the kind of movie that’s more impressive on the basis of sheer thoroughness of research and scale of recreation — respectable in its dad-like pursuit of the boring truth, but somewhat lacking in narrative momentum. Now imagine if one of the other Chrises was is in it.

Having been part of William Wallace’s rebellion, Robert the Bruce (Pine) now finds himself begrudgingly pleading fealty to King Edward (Stephen Dillane) and marrying his goddaughter Elizabeth de Burgh (Florence Pugh). (In a roundabout way you could consider this a sequel to Braveheart, since it happens in the years following the events of Gibson’s film… but that would also sort of be like saying that 2018 is part of the 2017 Cinematic Universe.) It’s not exactly an ideal situation for Bruce, and he almost immediately rejects any form of goodwill by murdering John Comyn, the Lord of Badenoch, and turning the English against him. He gets crowned the King of Scots and immediately led in pursuit by the English, taking a very small army (including his right-hand man James Douglas, played by an appreciably bugged-out-for-no-reason Aaron Taylor-Johnston) with him as he tries to push back against the English.

Inevitably, there will be die-hard history buffs who will take umbrage to the events depicted in the film. I don’t know how accurate the film is to centuries-old history, and there lies at least part of the problem. Outlaw King is extremely devoted to the narrative of historical events, and yet it lacks much of a drive. The supporting characters feel mostly interchangeable (which might explain why Taylor-Johnston opted to go nuclear in a role that doesn’t necessarily suggest bug-eyed bloodlust pitched at top volume) and the events start to bleed into each other before long. On one hand, it’s refreshing how small the scale is: Bruce often has less than 100 men under his command, meaning that many of the fight scenes take on a bone-crunching immediacy that’s often lacking in films with a wider scope. On the other, it means that there are a lot of characters with a lot of things to say, not all of which is necessarily captivating.

Outlaw King reteams Pine with Hell or High Water director David McKenzie. Both films broadly deal with the old Bob Dylan adage “to live outside the law, you must be honest,” which is about as much depth as Outlaw King can claim to have. That’s not to say that it’s a dumb film or one concerned with superficial things; it’s just one that gets entirely bogged down in facts and dates and the rolling tide of history. The two things that save it from being an absolute stodgy BBC bore are Pine’s ever-bizarre charisma and a quick, dirty and brutal violence that permeates the film. (If you were really wondering what “drawn and quartered” looks like, Outlaw King will explain it in no uncertain terms.)

Outlaw King ultimately doesn’t function as much as a vehicle for Pine’s peculiar, underused talents as I’d hoped. Taylor-Johnston scoops up the majority of the yelling and gesticulating and, while Pine gets a couple of rousing speeches in (and, yes, you do see his dick — which, based on the outsized Victorian response to this fact at TIFF, is likely to be the film’s defining contribution to the culture at large), his performance is rather muted. It’s unusual casting since there’s not much that’s Victorian (or Scottish, for that matter) but hardly comes across as interesting casting — that having been said, it’s a series of dates and battles and treaties forged with priests. It needed a lot of work to begin with. ■