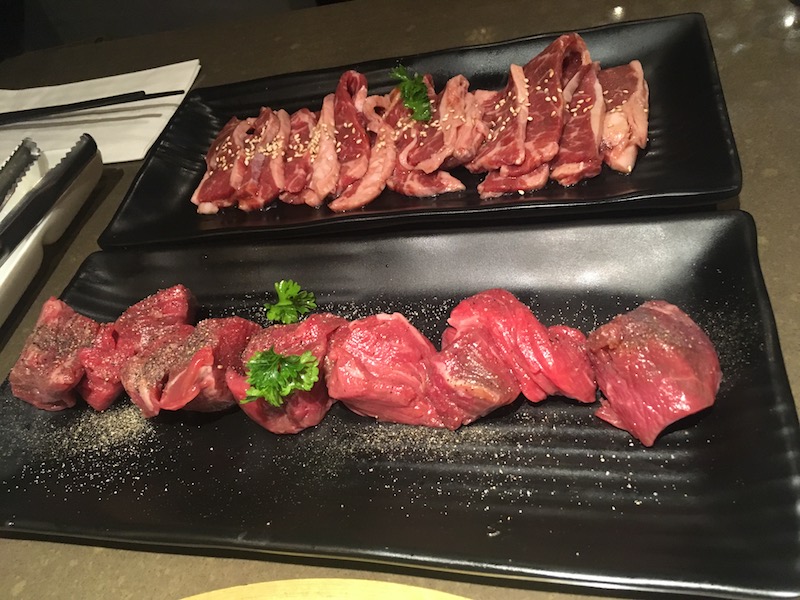 It’s curious to think that a barbecue’s best done in the summer. Granted, we’re not exactly encouraged by colder seasons to stand on our balconies trying to light coals or gas, but having such a close contact with the heat that’ll singe and char your meal? It just feels so right. Come fall and winter, minds sooner jump to piping hot bowls of soup, maybe plates loaded with starches and meat, but what about actively cooking one’s food on sizzling grills?

Montreal had a few options for tabletop grilling before the megalithic Japanese chain Gyu-Kaku showed up on Crescent Street, but choices were limited to Korean gogi-gui (which arguably inspired the former in the early 20th century, but who’s counting?). The city could start to tout a bit more variety with this new yakiniku destination, let alone the downtown area, which largely leans towards pub-based eats. What’s more, the setup engenders group-based meals, so I grabbed a couple of friends to try this one on for size. 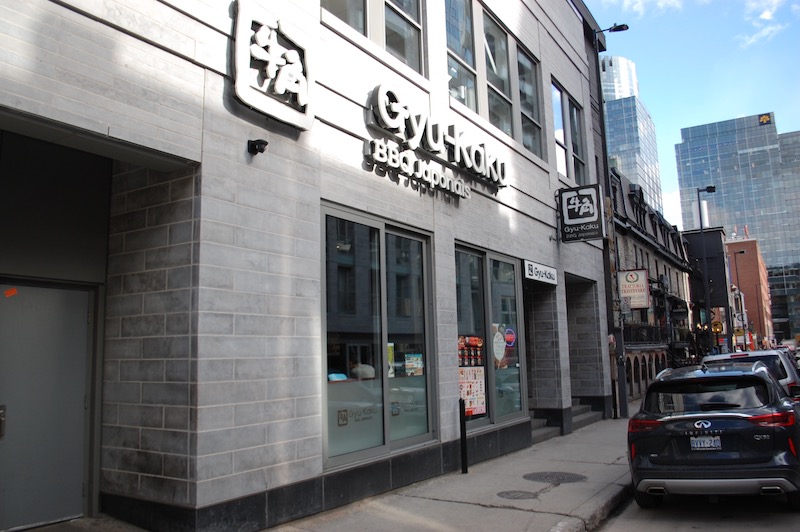 Gyu-Kaku’s undoubtedly a huge international chain, but it doesn’t feel exactly corporate when you pull in for a meal — not in the fast food sense anyway. Instead, it’s just about as inviting as any other Asian chain that’s touched down here, replete with friendly staff and lightning quick service. All that seems to be missing is a tableside iPad to order off of. The whole operation feels so streamlined, it’s hardly surprising to see what looks like a couple of business meetings pounding beers and grilling goods on a corporate dime and birthday parties slamming back saké bombs. There’s good vibes, but it’s by no means a quiet place to chat and chill while eating by any stretch — maybe for lunch services, but who’s got time to go out for a full lunch anymore anyway?

The menu, organized into selections of meat and seafood with names like “Samurai” or “Geisha,” is something I suppose you could roll your eyes at. Whatever: We order the Kabuki, a mix of beef à la chuck rib and filet mignon with standalone plates of shrimp, pork and chicken, rounded out by accompanying spinach garlic and broccoli. At $80, it feels like a decent steal, even if the food’s meant to come in small grill-able bites and is by no means a heavy meal. This is all topped with token starters of steamed rice, fried calamari and a “Gyu-Kaku salad” that was more of a tossed batch of carrot and cabbage with thousand island ladled on top — you can probably guess how wowed I was by that last one. The calamari wasn’t anything to write home about either, a too-lightly battered and almost tough dish, and I would’ve rather cooked it myself on the grill in front of me or asked to substitute with karaage.

Speaking of quality, the marinades for the meats do the trick, adding touches of light soy, mirin, or garlic to a given protein, but it’s by no means astounding. It just delivers what it promises: meat and veggies ready to go with all the flavours reminiscent of Japanese cuisine. One could hope that another chain just as big would hold itself to standards as high as those of Gyu-Kaku, but that’s not saying much. It’s all easily replicable, and this was probably one of the first times in a while that I thought to myself, “Geez, I could do this at home,” provided I was packing a George Foreman grill somewhere in the back of a cupboard. Then again, people would probably and chiefly find themselves sitting at a Gyu-Kaku table for the novelty of it.

Which brings me to my next point: It probably seems a little odd to have a food writer type about a yakiniku spot, as the whole process of eating in a place like this removes one essential part of restaurant criticism: I’m the guy, with my dining buddies, cooking the food. But writing about a restaurant is more than the chef, more than the kitchen: it’s about the experience.

Were we good at it? Fairly, but only with patience. The grill was a weak one, taking its sweet time providing enough heat at a moderate enough temperature to cook thin cuts of meat quickly enough. Case in point: Our spinach with garlic (which really was just spinach with minced garlic) came wrapped in tinfoil and took an inordinate amount of time to cook. Gyu-Kaku prides itself on its smokeless roasters, but I was fighting the urge to reach around the table base and crank the juice. Would we have the same experience if we went back? I dunno, but I was a little suspicious of how the restaurant put just about as much effort  into its drink menu as its food, offering fishbowl-sized pitchers of neon booze and litre mugs of beer; with happy hour posters plastered in every direction you look, I was starting to take Gyu-Kaku’s approach as being one that hopes you’ll get drunk enough while waiting to eat, with the establishment crossing their fingers that you won’t burn yourself.

Really, the whole experience amounted to feeling it was just… meh. Given quality of the space and the food at Gyu-Kaku, I’d sooner recommend one of the old spots in town; a homegrown Korean joint with tabletop BBQ would be far more worth an evening out with friends. While just as valid for out-of-towners to visit as the next restaurant, to me, Gyu-Kaku felt like more a Crescent Street tourist trap than a sign of fresh things to come or a craving finally filled. At least it can only get better from here? ■