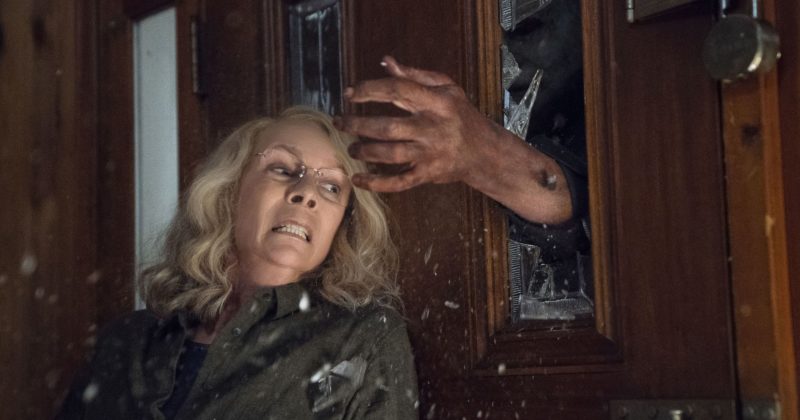 Let’s be clear on this: the likelihood of anyone ever recapturing the qualities of the original Halloween are practically non-existent. It’s the rare film that set in place all the hallmarks of a genre and remains, 40 years later, the best example of the genre it created. There are slashers that are almost as good as Halloween, but there are no better slashers. That, in itself, is both a good and bad thing; it means that Halloween is pretty safe at the top, but it also means that everyone is going to want to try to be the one that finally tops it. That means follow-ups to Halloween are both unavoidable and unadvisable, as can readily be understood by the near-dozen movies that make up a franchise that no one has really liked for 40 years.

That’s why I’m unsure whether or not this particular Halloween sequel is a hole-in-one or an impossible dream. It’s definitely not as good as the original, because few things are; it’s not even that stylistically similar to the original, in part because that aesthetic has been co-opted by exactly the kind of movies that Halloween was not meant to be. For all of this talk of elevated horror dominating festivals and films like Hereditary being the “new normal,” the fact is that I (and most people, I imagine) have no interest in seeing the slow, meditative, coolly effective Halloween — because it already exists. That having been said, there’s a “comfortable slippers” feel to the way David Gordon Green sets about following up Carpenter’s original that’s both a tremendous positive and a bit of a setback as well.

Forty years have elapsed since the events of the first Halloween film. Laurie Strode (Jamie Lee Curtis) has spent her entire life living in fear of Michael Myers, who has spent that period locked up in a mental institution. By 2018, Dr. Loomis has died, only to be replaced by the just-as-worrisome Dr. Sartain (Haluk Bliginer), who entertains a quasi-obsessive relationship with the man many have called evil incarnate. During a transfer between institutions, Michael manages to escape in a bus crash and make his way back to Haddonfield, where Laurie entertains a tense relationship with her daughter Karen (Judy Greer) and granddaughter Allyson (Andi Matichak), who have spent their entire lives dealing with the fallout of Laurie’s traumatic experience.

Depth isn’t necessarily a primary concern. Though there’s some exploration of trauma and the effects it may have on a family, Green’s vision of a Halloween film features a lot more let-me-get-these-pins-in-a-row-so-I-can-knock-them-down attitude. The first couple of acts actually feature fairly little Laurie Strode, instead spending time setting up some hapless slasher-movie cannon fodder: hapless British podcasters, horny teens, dunderheaded cops and so on. Myers remains a mysterious figure; even before he gets back into his old bad habits, his face is rarely seen, and Green mostly does away with the supernatural brute strength that sees him throwing cars and shit. He’s still an unstoppable force of pure evil, but a relatively grounded one! (I mean, if he steps on your head, don’t imagine that anyone will be able to recognize you afterwards.)

As far as wide-release horror movies go, this stuff is pretty good. Green has a great eye for atmosphere, the music (by Carpenter and his son Cody along with Daniel Davies) is predictably kick-ass and the film works itself into a good groove. The problem with this portion of the movie is that, while solid, it doesn’t have much of an identity. It pulls off gross-out gore scenes that feel closer to the Eli Roth playbook with heads bashed and faces peeled from a head and laid atop a torch; it lathers on comedic relief scenes (a tough-talking 10-year-old, dumb cops thrown for a loop by the concept of a bahn mi sandwich) that, while legitimately funny, feel a little out-of-place alongside the rest of the film. (I want to chalk that up to the influence of co-writer Danny McBride, considering how present his voice is in the film’s more comedic moments, but who’s to say, really?) Even Green’s least successful films have a certain visual signature and at least one memorable moment; Halloween has four or five, including a murderous tracking shot mid-trick-or-treating that represents a respectful attempt to up the ante.

Halloween really picks up in the third act, when Laurie Strode finally re-enters the picture. It will surprise no one that this is when Green really seems fired up; the film takes on quasi-mythical proportions as the two forces finally collide. This particular Halloween sequel ignores everything that happened in between, and the third act is so electric that it almost does feel like we haven’t seen any of this in decades. This is also where Green draws the most obvious parallels with the original, turning the visual language of that film on its head as the identities of the hunter and the prey become increasingly inseparable.

For as much as I love John Carpenter’s original Halloween, I am much less familiar with the sequels. It would therefore be straight-up lying if I said that this is the best of the Halloween sequels. I have no idea. (I have seen the two Rob Zombie efforts and I will say this; their first acts have a little more personality.) All I can say that in a world where any Halloween sequel can produce a nearly infinite number of results — in a world where even John Carpenter would be unlikely to measure up to his work in the first one — what David Gordon Green has done with the material is commendable. It certainly isn’t without flaws, but considering the batting average of this type of sequel… I mean, the last non-Zombie one has Busta Rhymes killing Michael Myers. I suppose there was nowhere to go but up after that. ■