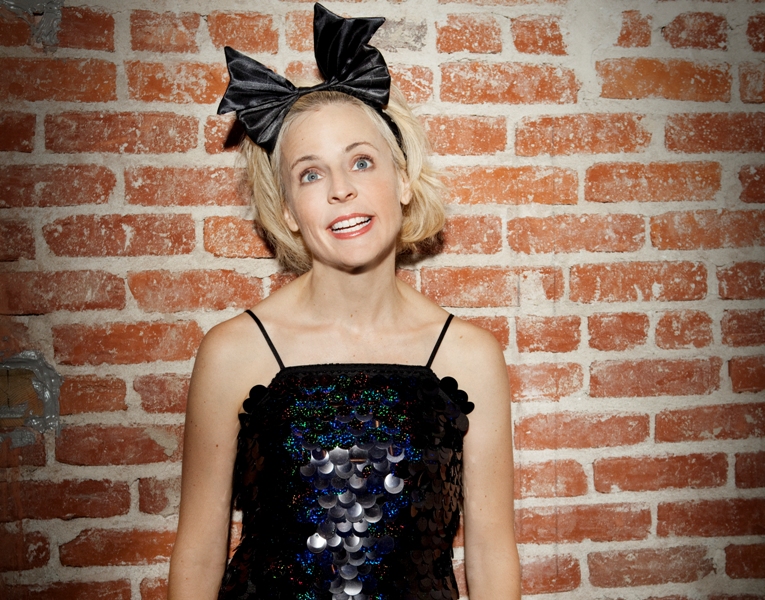 Maria Bamford has released comedy albums, recorded comedy specials, done stand-up on pretty much every late night show, had her own show (the absurd and wonderful Lady Dynamite) and lent her acting (and voice acting) chops to everything from Arrested Development to Portlandia to BoJack Horseman to Adventure Time. Stephen Colbert has called her his “favourite comedian on planet Earth” and Judd Apatow anointed her the funniest person in the world. So yeah, she’s the real deal. But the way you know she is truly excellent is that in late June, upon finding out a fan was too young to attend a show she was doing at a casino, she did her entire show for him in a coffee shop.

I recently caught up with Bamford to chat about introversion, idiosyncrasy, and the simple joy of existence.

This interview has been lightly edited and condensed for clarity.

Dave Jaffer: I read a piece last year in which you called yourself an introvert. Is there a fundamental tension in being an introvert and also being a performer?

Maria Bamford: It just depends on how you handle that. I don’t do a lot of crowd work, I’m very much theatrical and performative. I mean, I’m relatively introverted onstage. I’m not chit-chatting with people or making that much eye contact, frankly, so it’s not a stretch I don’t think. For me, being onstage is a very controlled communication format; there’s a feeling of you know what’s going to happen, or there’s a limit to what’s going to happen. As opposed to chatting with your neighbour, where you don’t know where it’s going to go.

DJ: A lot of your material seems to come from being a misfit, and finding the funny in the abnormal things that people consider to be normal. Where do you tend to find your inspiration?

MB: I just get through what’s going on in my human experience, which of course is extremely limited in scope. When I think about people being misfits or whatever, it’s like, if you talk to anybody for more than ten minutes, they’ll reveal something about themselves where you’re like, “wait what?” [Laughs] Where you’re like, “go back, what is it you believe?” Or, “what is it you’re doing?” I always think that’s interesting. The thing that was painful to me when I was first starting out was — and it still happens — was when [people said], “I don’t get it, what you’re doing is not funny and yeah, stop.”

DJ: That’s the experience that most of the rest of us have, though, isn’t it?

MB: Which is bizarre to me. My friend dated this comedian who said, “hey, just to let you know, if you make a joke and I don’t laugh, it’s just that I’ve worked with some of the funniest people in the world, and so I can’t.” Like, what? If anything, you should be more open to loving just any freaking attempt at levity. I mean, I love any jokes. Any puns, or attempts at faces.

DJ: Isn’t that kind of like saying, “I’ve worked with the sharpest knives in the world so your regular sharp knife isn’t going to cut me”?

DJ: I read something wherein you said when you were young, you felt like you had no value to the world. Have you made peace with this yet?

MB: Like a tree, or the small, fat, black chihuahua who’s sitting right next to me, you exist in this world. That’s me! Somebody may get the chance to walk past you and go, “you’re pretty cool.” [Laughs] That’s what that is. Maybe I can help somebody else make their lives easier, or better, and vicey-versey. I guess I don’t know. If I was going to bank my value on whether I was a good comedian, I might be at a big loss.

DJ: What percentage of interviews you do don’t turn into conversations about mental health? Ten percent? Five?

MB: [Laughs] I would say about one percent.

DJ: I apologize, because I’m going to contribute to that bad ratio.

DJ: It’s dumb and reductive to say, “Maria Bamford is a comic who talks about mental illness! Holy shit!” like it’s a clickbait headline, but it persists because you’re very upfront about having certain mental health issues, and committing yourself, and getting medicated, and being an advocate for that community. Some comics discuss their mental health issues to connect and be relatable to their audiences, while mental health seems to figure prominently in your act in a different way, like it’s less about being relatable and more about being honest. Is that fair?

MB: Yes. Like, I don’t care if nobody gets it. I like taking the risk and saying exactly what my experience is, even if everyone’s like, “what?” It was very comforting to me when somebody said, “oh, that specific experience is actually very normal and I’m almost bored with hearing about it” or the psychiatric professional is like, “mmhmm, yeah.” I don’t have to relate to everybody’s experience. ■

If ever you feel you need to speak to someone about mental health issues or concerns, BetterHelp is available to assist.