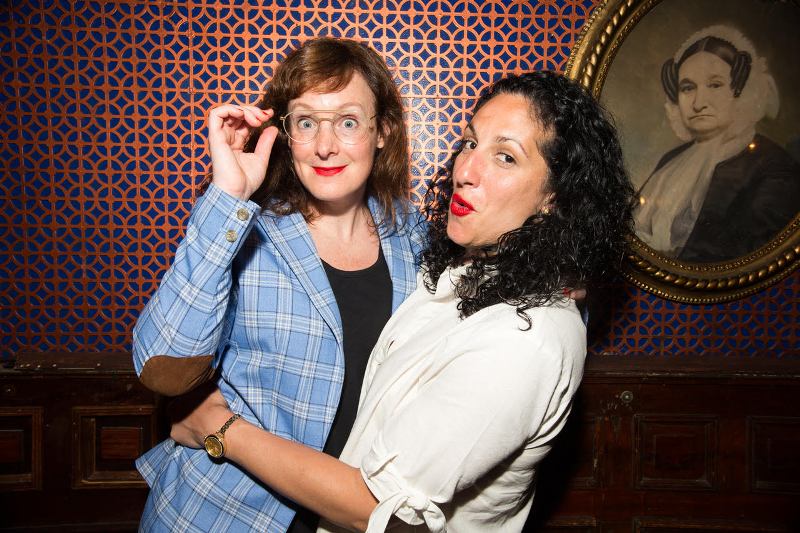 Probably the worst joke of Jess Salomon and Eman El-Husseini’s careers goes something like this:

Two years ago this spring, the freshly married El-Husseini and Salomon began a new life together in the United States, crossing the border on Eman’s freshly minted green card. “(Jess) had to walk behind me,” Eman laughs. “I felt like a Muslim man in Saudi Arabia. It was amazing.”

Barack Obama was president, New York had legalized same-sex marriage, Americans were about to elect their first female president … what could go wrong?

Trump jokes are a staple for many American comics seeking refuge at Montreal’s Just for Laughs festival this summer, but the transition wasn’t any easier for the Canadian comics. “We both had to adjust from anger to being funny again, because we were so frustrated with the results,” Jess admits.

And the election win even changed audience dynamics, she adds. “I used to think bachelorette parties were the worst (crowds) until Trump got elected.”

Still, although New York may be where Trump made his fortune (and others’ misfortunes), he’s hardly a favoured son here and local audiences are sophisticated consumers, Eman says. The strong comedic traditions in NYC make it a Mecca for many comics. Audiences “are like comedy connoisseurs. It really makes your writing stronger and more creative. You can’t be lazy in New York.”

“It makes you better at comedy,” Jess adds, “because it’s a bigger pool, it’s more competitive … there’s a higher bar.”

Before moving to the Big Apple, Eman says, “I’d just give up as soon as I found something slightly funny and I would hold onto it rather than trying to work out the best punch line possible.”

If their Just for Laughs homecoming shows are any indication, Jess and Eman have learned a lot in the New York school and earned a hearty “welcome back” as prodigious if not prodigal daughters of the Montreal comedy scene.

Their joint El-Salomons show is a mash-up of some of their respective solo stand-up bits and the teasing bicker-banter inspired by their lives as a gay Palestinian-Jewish Canadian comedian couple living in 2018 America.

The title is also the name of a comic series the pair have published since last November. The weekly panel, written by the comedians and illustrated by artist Jesse Brown, is published on Facebook and Instagram, and they are currently negotiating to have it turned into an animated cartoon voiced by Eman and Jess.

And for this fest at least, it’s Eman’s turn to trail behind her wife as Jess Salomon is also booked to perform at three galas: two in French and one in English.

English AND French galas at the same festival? Sounds like a major first. “I don’t know if I’m the first,” Jess says, betraying the kind of caution that befits her former occupation as a war crimes lawyer at the Hague, “… but I can’t think of anyone else.

“But I’m definitely the only one who isn’t truly bilingual,” she laughs. “My accent is terrible!” She even flew “home” on the July 4 U.S. holiday to test out her gala material on a Collège Laval audience. Still, she’s hoping to invite her Grade 7 French teacher to one of the galas to show off her passé composé.

And Jess’s accent hasn’t stopped her from performing in French at Zoo Fest or at the Bordel comedy club on Ontario Street on one of her numerous visits back to Montreal. That’s where she met Laurent Paquin, a Quebec comedy icon and the host of two Juste Pour Rire galas on July 19.

“I guess he just gets to book who he wants,” she says to explain getting much coveted French stage time — twice — at Place des Arts.

By the time she takes the stage at the Ken Jeong Gala on July 26, Jess should be well adjusted to telling jokes live in front of 3,000 strangers.

“We’re just happy to be home,” she says.

“It’s not just about doing galas,” adds Eman, “but about being surrounded by warm people. “Everybody kisses you hello … they don’t even know you!

“I think being Canadian really works in our favour (doing comedy in the U.S.) because they know we’re nice, too,” Eman adds.

Judge for yourself at Mainline Theatre July 20 or 21. ■