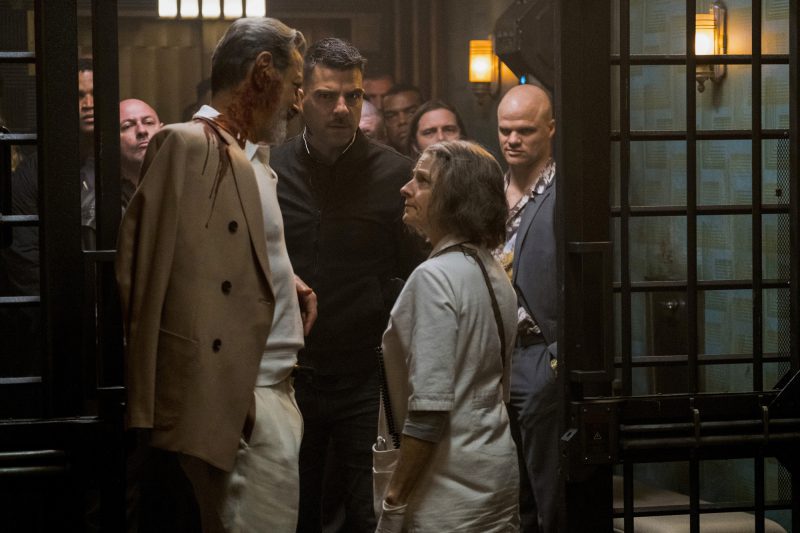 Every successful screenwriter in Hollywood has at least one pet project they keep kicking around between polishes on major franchises and ill-fated adaptations. (The unsuccessful ones, too, I’m willing to bet.) These are the so-called unfilmable projects, the deeply nerdy cross-pollinations that are fine-tuned with such precision exactly because they’re so unlikely to get made. They’re personal projects but also ostensibly commercial ones – the films that should be made according to some of the highest-paid scribes in the business. I know this because, once in a while, that same screenwriter is handed an olive branch by the studio and makes exactly the kind of quirky, out-there genre film that they’ve always dreamt of seeing, full of their favourite shit and generally packed to the gills with stunt casting. These are the Passion Plays, Winter’s Tales, Virginias and Mojaves of the world, efforts so self-indulgent that they often become footnotes in their own creators’ stories.

On paper, Drew Pearce’s Hotel Artemis should have been exactly that. Pearce doesn’t have the reputation of a Diablo Cody or William Monahan, but the fact that his debut film is a post-apocalyptic genre mishmash featuring the year’s wildest cast should definitely have cast some doubts. Heavily indebted to nearly every strain of genre cinema of the last 20 years from the work of Park Chan-wook (that’s probably no coincidence considering Pearce employs frequent Park collaborator Chung Chung-hoon behind the camera) to Sin City, Blade Runner and (particularly) John Wick, Hotel Artemis has, really, no reason to work as well as it does. Perhaps what saves it from being the kind of masturbatory misfire that I outlined above is that it isn’t quite as intensely personal as those films. What’s personal here is Pearce’s love of the things he’s borrowing from, rather than a slavish devotion to his own creation.

The year is 2028. North America has fully been crumbled by capitalism – water is now privatized, with even basic services now reserved for the wealthy. The population has snapped, and Los Angeles is currently experiencing the worst riots of its history. Four men (Sterling K. Brown, Brian Tyree Henry, Kenneth Choi and – improbably – Josh Tillman, aka Father John Misty) decide to rob a bank mid-riot in order to separate the rich from their “lootables.” The heist, predictably, goes wrong, sending the survivors, Sherman and Lev (Brown and Henry), to the Hotel Artemis – a state-of-the-art hospital for criminals and other underworld denizens in downtown Los Angeles.

Run by the crotchety, anxiety-ridden Nurse (Jodie Foster) and her trusty, bone-snappy orderly Everest (Dave Bautista), the Hotel Artemis exists on a strict membership-only basis, which means that the current patients (Charlie Day as a foul-mouthed arms-dealing billionaire, Sofia Boutella as a seductive French assassin) might have their hands full when the hotel’s owner, gangster kingpin the Wolfking of L.A. (Jeff Goldblum), comes a-knockin’ – or when a controversial figure from the Nurse’s past (Jenny Slate) shows up in need of some immediate medical assistance.

There’s a lot going on in Hotel Artemis considering its compact 94-minute runtime; it sometimes feels like you’re watching the season 4 finale of a show you’ve never watched before as Pearce scrambles to outline the numerous connections, friendships, back-stabbings and other sundry twists that all happened before the film began. The hotel has a 22-year history, and Pearce wants to make sure that you feel every day of it, even if it means spinning a lot of convoluted spiderwebs and adding some thematically relevant MacGuffins in the process. For example: Henry’s character steals a pen from a bank customer in the first scene that later on is revealed to contain diamonds that belong to the very feared and very powerful Wolfking of L.A. He shows up later on at the hotel – but because he’s been injured, not because he’s looking for the diamonds. The diamonds, in effect, are a very minor plot point given major attention in an ever-flowing jambalaya of influences.

These come at you so fast and so thoroughly that Pearce effectively manages to avoid the fatigue that comes with this kind of pastiche. It’s noir, it’s sci-fi, it’s action, it’s (very curiously) obsessed with the Topanga Canyon scene of the 1970s, it’s a Korean movie with no Korean actors in it, it’s John Woo, it’s Brian DePalma, it’s Blade Runner, it’s comic books, it’s everything. That it isn’t pretentious and disappearing up its own ass is a miracle in itself – the guy is apparently friends with Father John Misty, no stranger to disappearing up his own ass. What could become frankly unappealing in a Southland Tales kind of way actually winds up being charming – but I have a lot of love in my heart for that particular misbegotten piece of cultural ephemera. Go big or go home, as they say, and even if Hotel Artemis is imperfect even in its best moments, I can’t argue that it doesn’t go big. ■